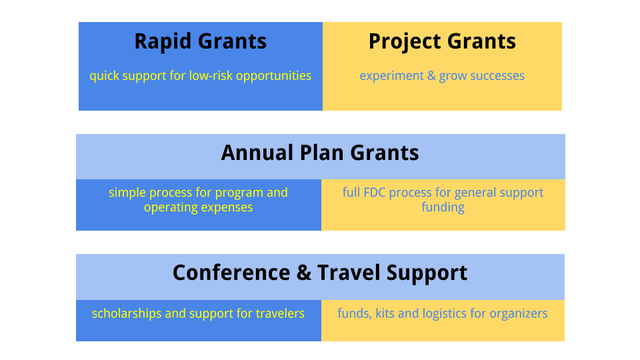 Participation from over 200 community members in the Reimagining WMF grants consultation led to planned changes to WMF’s grants programs illustrated by the above graphic. Image by Chris Schilling, freely licensed under CC-by-SA 4.0
Last month, the Wikimedia Community Resources team offered an idea for restructuring the WMF’s grant programs. The existing system for distributing community resources was at times difficult to explain, understand, maintain or engage with, and so we suggested an idea for improving grants as a whole. Through multiple channels, the team gathered 245 responses during the consultation between 17 August and 7 September 2015. The team took some time to understand the concerns, endorsements, and suggestions the community provided, and made important changes to the idea accordingly. There is also much to share about effectively running consultations more generally, a topic that will be featured in an upcoming blog post.
The consultation featured an idea for restructuring the grant programs that included three funding types with several options within each funding type: Event Grants (with the Large Event, Small Event, and Travel Support options); Project Grants (with the Seed and Growth options); and Annual Plan Grants (with the Full Process and Simple Process options). The consultation also included a survey that asked people with experience with grants about their experiences and priorities. The final report contains information about the methodology, analysis, findings, and material changes to the grants programs. In this post, will outline some key findings from the final report.

Overall, respondents liked the idea, the funding types offered, and the ways they could use the funding. On the other hand, most respondents expressed at least a few concerns or had useful suggestions about how the idea could be improved. A few of the major concerns brought up are around specific aspects of the idea not being clear enough, like the distinctions between grant types and what exactly they covered. Respondents are understandably concerned that the new structure not take up too much time from volunteers, and offered many concerns and suggestions about limiting the time volunteers would need to spend learning or engaging with the new structure. There were more than 60 specific suggestions during the consultation, as well as several ideas for different structures we might consider!
We used all of this information to improve the idea by enhancing the things people liked, addressing concerns, and implementing suggestions. For instance, participants expressed concern that there were too many options in the idea, which may be confusing for applicants. As a result, we simplified Project grants into a single structure rather than two separate options. Also, participants favored the idea of small and accessible grants up to $500 that were originally grouped as an “Event Grant.” We increased that limit to $2000 and created a separate category for these funds called Rapid Grants, which can be used both for events and projects.
Since the consultation included a survey as well as a place to respond in the IdeaLab, the team got some interesting insights into how people experience grants. This was some good information for understanding better the priorities of respondents. For example, we discovered that respondents rated achieving impact as very important, along with speed in the application process and simplicity in the application process. Respondents rated these much more highly than community participation. This led us to some concrete ideas about what we should prioritize in the new structure, since we realized we needed to focus community participation more on the biggest and most complex grants and have simple and speedy options for other grant types and options.
Another major theme is around supporting applicants and grantees better. There are the greatest number of suggestions about applicant support, and especially around providing more personalized support and being able to direct applicants to the right grant type for them through tools like a wizard. There was also a question specifically about the types of non-monetary support that are important to them. Connections, budget guidelines, and online resources are seen as most important, and the need for more targeted support for specific topics is also emphasized.
The team is glad to know that most grantees (about 51%) found the grants experience overall easy and 55% described the grants experience as above average or excellent. Below you can see some aspects of the grants process that people rated specifically, to get an idea of where some of the pain points are. While getting grants processed is ranked as easy, reporting and collecting global metrics are ranked as more difficult. These areas may need to be improved, or may need more support. 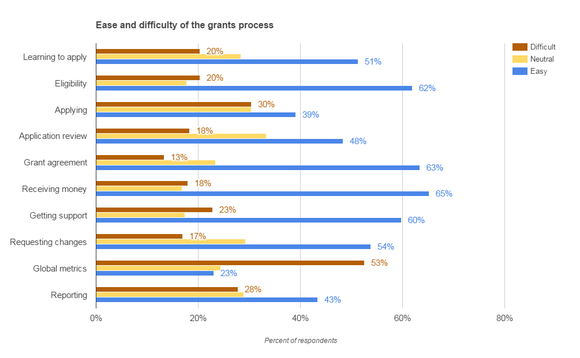 Chart showing ratings of ease and difficulty for different aspects of the grants process. Image by Winifred Olliff, released into the public domain.

Since respondents liked the idea but had a few concerns, we made substantive changes to the original proposal on IdeaLab to enhance what people liked about the idea and fix what didn’t work (see the top graphic):

This new structure and the development of related plans around the grants process will proceed gradually over the next year, according the following timeline:

The Reimagining WMF grants consultation was a success: participants offered a lot of thoughtful feedback that has reshaped the grant programs into something better, which better reflects the ideas and priorities of the people who use grants. As this new structure is implemented over the next year, we will continue to develop plans with communities. We hope this outcome will lead to improved experiences for grantees and applicants, and that this structure will better address the needs of contributors. On top of that, as an added value, this consultation has been a great learning experience. Several best practices and lessons about consultations with communities have emerged over the last month that we will be sharing soon on this blog, and may help Wikimedia organizations run consultations with their local communities.
I want to express my gratitude to everyone who took the time to provide feedback and ideas, and who engaged in a conversation with us about how we can best serve communities through grants.
If you have questions about this report, conclusions, or the methods of this consultation, please ask them on the report talk page or in the comment section below.
Chris Schilling
Community Organizer
Wikimedia Foundation