As part of the legacy of the Bangla Wikipedia’s expansive ten-year anniversary celebrations, the Bengla (or Bengali) Wikimedia community and Wikimedia Bangladesh—a local chapter—has been hosting Wikipedia awareness programs in schools around the country. 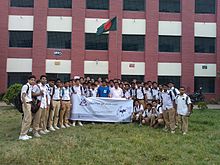 Out of nine programs, three were held in Dhaka, four in Chittagong, one in Patgram Upazila, and one in Rajshahi. Local Wikipedians, school teachers, cultural clubs helped to organize the events, which were each attended by an average of seventy students from ninth to twelfth grade. The events received press coverage from around the country, including newspapers like Prothom Alo.[1]
Surveys conducted before each event confirmed previous anecdotes, showing that about half of the participants did not know what Wikipedia actually is, and a further fifth believed that it is a sister project to Google. A tenth thought it was sponsored by a government, and only one tenth knew that it was an encyclopedia, with the remainder taken up by non-responses and miscellaneous answers. Given these results, it should be unsurprising that only a bare minimum of the attendees knew that Wikipedia was publicly editable. 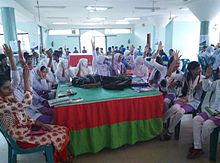 With those in mind, we started each event with a brief introduction to Wikipedia and the other Wikimedia projects, the importance of these sites relative to their studies, and how to use them to effectively get information—vital knowledge for the thousands of Bangladeshi students who are now getting wide access to the Internet through government-built computer labs in schools around the country. Furthermore, we emphasized that there was more than just the English Wikipedia—the Bangla Wikipedia is expanding every day in their own language.

These school programs directly help increase readership among students—a major goal of Wikimedia Bangladesh, as we believe that to increase our total number of editors, we have to increase our readership. Most of the Bangla Wikipedia’s contributors come from students in school or university, but a majority of the current student population does not use Wikipdia.
We already have one tangible result: a Wikipedia club has already been formed at the Shaheed Police Smrity School. It is moderated by a teacher and is filled by interested students from all grades. Our hope is that these sorts of school programs will entice students to use Wikipedia for their benefit, and bring in teachers that can expand the program and sustain it over the next several years.