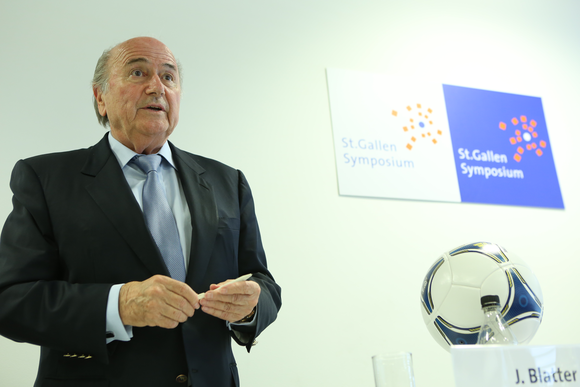 Sepp Blatter has found himself under renewed calls to step down from his position. Photo by the International Students’ Committee, freely licensed under CC-BY-SA 3.0.
FIFA, the world’s organising body overseeing association football all over the world, has spent much of this year battling with corruption claims. Police in several countries have launched investigations into accusations that some of their highest-ranked officials may have been involved in bribery.
This month, FIFA’s president Sepp Blatter was urged by four major sponsors of the federation to immediately step down from his position. Today, Blatter was suspended for ninety days by the federation’s ethics committee.
He had previously won re-election just two days after police arrested fourteen people, including seven officials, on corruption charges in May.
An article on these arrests, “2015 FIFA corruption case”, was drafted hours after they were made. The original author was Gareth Kegg, who has been editing Wikipedia for more than ten years and has, at the time of writing, created 1,564 articles on the site. The first draft was fairly modest: based on one rolling news story from British newspaper The Guardian, it named nine of the highest-profile arrests as well as the background leading up to the leadership vote on May 28–29.
Since its creation, the article has grown from just a few paragraphs to an article documenting the history of the allegations—from even before the May arrests which brought the story to front pages worldwide—which now contains a total of 83 references, as well as a link to the court papers on the United States Department of Justice.
The article’s attracted 534 edits since its creation—an average of around four edits per day—by more than 200 users from all over the world. Arguably the world’s most popular sport, it’s not surprising that football is a popular topic on Wikipedia: WikiProject Football, one of many editor taskforces on Wikipedia, considers more than a quarter of a million articles to be under its scope, and has 400 editors signed up as members.
The article now covers international reaction to the indictments, FIFA’s suspension of the World Cup bidding process, and Blatter’s decision to step down ahead of an extraordinary FIFA Congress in 2016.
For the four sponsors, however—Coca-Cola, McDonalds, Visa, and Budweiser—Blatter’s decision is not enough. They this week called for him to immediately leave his post as President of FIFA, following reports last week that he had made “disloyal payments” to the head of the European confederation of FIFA in 2011. The four companies provide a large part of the estimated $1.62 billion FIFA takes in every four years in World Cup sponsorship. Blatter denies wrongdoing, and refuses to respond to the sponsors’ demands.
Today, members of the FIFA ethics committee suspended Blatter, as well as two other officials, for 90 days in relation to the suspect payments. This decision was reflected swiftly on Wikipedia. 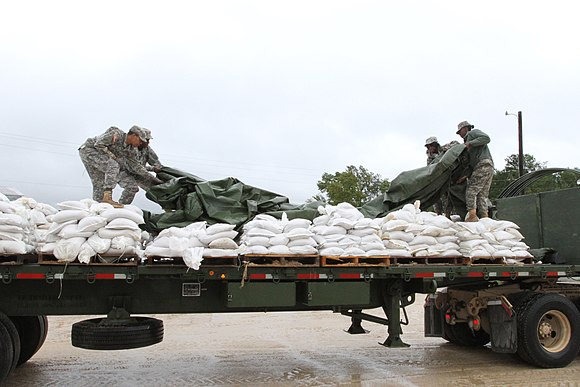 The South Carolina National Guard provided locals with sandbags in preparation for the storms. Photo by the South Carolina National Guard, in the public domain.
Also in the news this week was Hurricane Joaquin, which this week battered the Caribbean with winds peaking at 155 mph (250 km/h). It was the strongest Atlantic hurricane since 2010’s Hurricane Igor, and caused extensive damage to the Bahamas and Bermuda. It is thought to have caused the deaths of at least 50 people, the majority of them crew on missing cargo ship SS El Faro, presumed to have sunk following widespread searching.
Joaquin contributed to the October 2015 North American storm complex affecting the eastern United States, in particular the states of North and South Carolina. The storm, known locally as a “nor’easter”, has caused catastrophic flash flooding since September 29, ongoing in areas of South Carolina.
At least 18 deaths have been attributed to the storm, the majority of them in South Carolina. The flooding is thought to have caused billions of dollars worth of damage to homes in the regions worst hit. Parts of South Carolina have been declared disaster areas, and more than 1,300 National Guard soldiers have been mobilised.

In the early hours of October 3, the United States Air Force bombed a Médecins Sans Frontières (MSF) hospital in Kunduz, Afghanistan, killing twenty-two people and injuring more than 30 more. The United States and NATO have launched investigations into the incident, condemned as a violation of international humanitarian law by MSF.
The hospital was the only active medical facility in the area, reported The Atlantic, and has been essentially shut down. Critical patients were referred to other providers and MSF staff were evacuated from Kunduz. US President Barack Obama gave his “deepest condolences” in a statement made following the attack, while the UN High Commissioner for Human Rights, Zeid Ra’ad Al Hussein, demanded an independent investigation.
Joe Sutherland, Communications Intern, Wikimedia Foundation