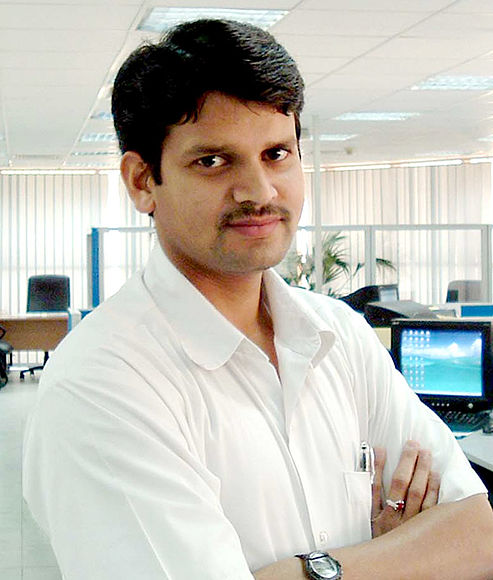 Viswanadh B.K. was the second Telugu Wikimedian to be given an Individual Engagement Grant. Photo by విశ్వనాధ్.బి.కె., freely licensed under CC-BY-SA 3.0.
In 2013, the interview project “WikipediansSpeak” was launched in response to observations that many noteworthy Wikimedians were being underrepresented both locally and globally. Not just them personally—their work, and the communities they represent, were also unknown to the Wikimedia community and the outside world. The Wikimedia Foundation’s fundraising campaigns were the biggest inspiration for the project. From video-only interviews, this is an attempt at different ways of interviews, and is the first interview showcasing a Telugu Wikimedian: Viswanadh B.K., who was an Individual Engagement (IEG) Grantee last year and has continued to be active in outreach.

Recently, you attended a Telugu Wikipedia workshop for the Botany-major undergraduate students at Andhra Loyola College, Vijayawada, Andhra Pradesh. Would you like to talk a little bit about your participation, how the program was designed, the activities there and the output? How are you planning to mentor the students in the future?

The staff and students are quite enthusiastic, and the students are dedicating considerable time to learning, and reflecting their learning, while editing the Telugu Wikipedia. However, they need more training on basics of Wikipedia, as well as on policies and guidelines. Without that, they might end up creating low quality articles that the community will face problems cleaning up. Centre for Internet and Society’s Access To Knowledge program (CIS-A2K), that has been organizing these sessions in the college, should seek out more support from the Telugu Wikimedia community so that the experienced editors could mentor these students. I feel it would be a good idea to award the students and faculty with certificates. These small little things often motivate many.

What part should the community and CIS-A2K be playing in the Wikimedia movement? What could and should we do for the Telugu community?

You were the second Telugu Wikipedian to be awarded with an Individual Engagement Grant (IEG). How did it go, and what did you achieve? Based on your own experience, how are you planning to groom this year’s applicants from Telugu and other Indian language Wikimedia communities?

This IEG was my dream come true! Back in 2009, I blogged about the potential of opening up library catalogs on the Internet for people to search for books. It took shape with my grant project: “Digitization of Important Libraries Book Catalog in Andhra Pradesh and Telangana”. I worked on an extensive project, digitizing the catalogs of five libraries—a total of 300,000 books—in the Indian state of Andhra Pradesh. I learned a lot, and documented part of my learning, which talks about the ways one should go about partnering with Indian institutions. I believe, my interaction with fellow Wikimedians must have helped them to better their grants applications this year. And I am hoping that I will continue to support more friend from my community and country in the future.

What drove you, over the years, to work on a project like this digitizing library catalogs? Were there any additional learning and benefits from this project?

In this digital age, people searching for books on the Internet might have developed the notion that if a book is not available online, it doesn’t exist. I have been experiencing this very issue while looking for evidence notability and citations on the Telugu Wikipedia. Many Wikipedia editors argue for citing at least the name of the book when the book is not available online. This pushed me to create a central catalog that will benefit Wikipedians, researchers, and readers. In the process of creating the catalog, I also managed to develop strong relations with several cultural organizations. These include Kathanilayam, a dedicated organization collecting every Telugu story; the Annamayya Library, which developed into a great cultural center in Guntur, Andhra Pradesh; and the Suryaraya Vidyananda Library, whose collection is enriched with rare manuscripts and important books. I touch based with them then, and they are slowly becoming household names for other Wikimedians for their library-related needs. We can see the potential of strong partnerships and synergy with these libraries.
Subhashish Panigrahi, Programme Officer
Access To Knowledge, Centre for Internet and Society