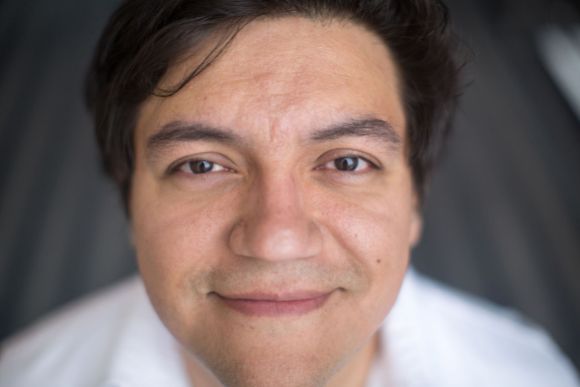 Miguel Zuñiga Gonzalez first started as a Wikipedia volunteer in 2006. Today, he combines this passion with his love of teaching, and works with university students on improving Wikipedia’s coverage of medicine. Photograph by Victor Grigas, Wikimedia Foundation, freely licensed under CC BY-SA 3.0.
For Miguel Zuñiga Gonzalez, working with university students on improving the Spanish-language Wikipedia is not just a job, but a passion and a way to give back to the world. “It’s a great chance to teach young people that it’s important to give something back for everything you get,” he says.
A native of Mexico City, Miguel is an architect and a Spanish as a Foreign Language teacher working with public universities in Mexico, as well as a Wikipedia contributor of nine years. During the 2015 Wikimania conference held in his hometown, he shared details of his everyday work with medical students on Wikipedia and discussed various ways in which the flagship project can be developed further.
As a self-professed unregistered editor, Miguel’s first suggestion relates to the value of anonymous Wikipedia contributors. “We need to work hard to tell people not to be afraid to edit,” he says. “Being able to edit without logging-in is a great opportunity for people to start to get involved. In certain areas of the Spanish Wikipedia, such as history and the humanities in general, it is often difficult to make changes if you are a logged-in user. Edits made by unregistered users are given more consideration and are not removed as often, and it creates less pressure on people,” he reports.
Asked to choose one issue that he would like to change about Wikipedia, Miguel decides on the somewhat popular perception of the project’s verifiability. “For many teachers nowadays, it is hard to believe that Wikipedia has accurate information. They don’t even give themselves a chance to explore it, treating it almost like the devil incarnate because there is no brick-and-mortar institution behind [it] to support it,” he points out.
As an editor of the Spanish-language Wikipedia, Miguel notices the differences between the encyclopedia’s various language editions, of which there are now more than 290. “When reading an article on the English Wikipedia, you can see many things that it puts the emphasis on which are not highlighted in the Spanish version, and vice versa. You wouldn’t believe we all have the same goal, because we try to reach it in so many different ways,” he says. “I don’t think I really understood what intercultural communication was before I started editing Wikipedia.”
Another concern Miguel has is the lack of involvement of the general population with the project. “In Mexico, we all use Wikipedia for a lot, but we don’t contribute to it. Even if we find an error, we don’t do anything about it,” he says. “For all Latin American people, the Spanish Wikipedia needs a lot of help.” True to his teaching soul, however, he sees the possibility of change in the younger generations. “Young people are more inclined to share their knowledge with the world. Students, actually, get very motivated when they publish their work on Wikipedia as part of a paper. For them, it’s a challenge. Telling them that it will be for the whole world to review gives them even more of a reward.”
There are other advantages to this approach, too. “When students do research for their articles, they find practical uses from what they’re learning at the moment, such as the ability to search scientific databases,” says Miguel. “When a reference is properly used, it also gives them a chance to expand their knowledge. When they improve things even a little bit, by adding five or six references to an article, they make a big contribution by ensuring everything is reviewed.”
“It’s important to convince young people that it’s easy, that you don’t need to be this girl or that guy to create change one step at a time.”
Interview by Caitlin Cogdill, Global Fundraising Email Manager, Wikimedia Foundation
Profile by Tomasz W. Kozlowski, Wikimedia community volunteer