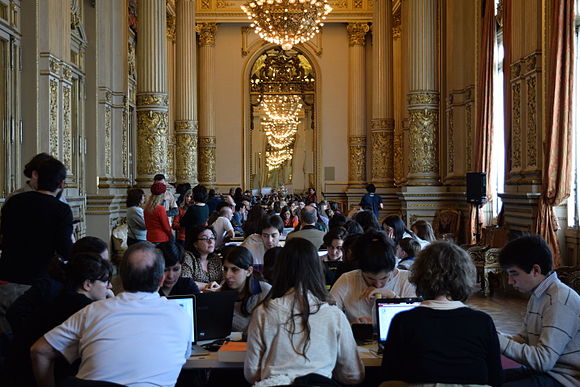 A busy, 150-person editathon hard at work in a famous opera house in Buenos Aires. Photo by Mauricio V. Genta, freely licensed under CC-by-SA 4.0.
Family arguments in my grandmother’s house ended the moment Wikipedia came into our lives. Any hint of controversy now begins and ends within a few seconds: “how long ago did the Homo sapiens appear on Earth?” “Look it up on Wikipedia.” “When was Frank Sinatra born?” “What does Wikipedia say?” “How many islands form the Maldives?” “Easy, search Wikipedia.”
Strangely, being able to find the correct solution at a moment’s notice is far less interesting than spending a whole afternoon guessing at hard-to-corroborate answers. Risking an answer on a hunch is now much more humiliating—like the time my cousin answers the Homo Sapiens questions with “sixty thousand years ago at the most.” The online answer proved him awfully, terribly wrong.
Of course, it cannot be denied that Wikipedia is a wonderful and miraculous tool. Otherwise, how would you explain that almost 150 people gathered on a sunny August morning at Teatro Colón—a great opera house in Buenos Aires and considered one of the best concert venues in the world—to donate their time to researching the building’s history, and uploading all this knowledge to the Spanish Wikipedia?
As Wikimedia Argentina’s Galileo Vidoni said in his welcoming speech, “Wikipedia is the largest collection of knowledge ever produced by man. The challenge today is to break with the misconception that only wikipedists can write an article. Anyone can do it and we are here today, experts and people who participate for the first time, to release the knowledge contained within this legendary theatre and pour it into a digital platform, through collective work, as a team.”
As the name implies, the editathon is a seven-hour marathon during which volunteers try to rewrite and edit the Wikipedia article about the theatre already existing on Wikipedia. Volunteers try to contribute additional and improved content. There’s no better way to do this than setting up our camp at the very place we’ll be writing about—able to explore its nooks and crannies, speak with specialists, and consult its bibliography. The “writing room” assigned to us couldn’t be any more idyllic: the famous Golden Room greets us with 15 tables occupying the room’s length and lit by magnificent chandeliers and sun rays that shine through the exquisite Gaudin stained glass windows.
Our first mission is to go on a traditional guided tour, during which we have the privilege of being the first people to see the preparations for an opera opening on Sunday—a scenery of Greek figures and green landscapes made of wood, cardboard, and paint that come to life thanks to the magic of the stage, curtains, and lights.
Back at the Golden Room, Galileo and another Wikipedians ask the volunteers which subjects they want to research—after having read the building’s Wikipedia article, we’ll be able to understand weaknesses in content or important omissions during our researching.
Next, the tables are organized according to different categories. Table six for instance, was in charge of looking into the theatre’s architecture and furniture, and table seven was in charge of starting a new section on the workshops and crafts that take place underground, in the building’s basement.
The process was rather chaotic. Photographers walked up and down, getting images of the building and important people in the theatre. Jean, a French student of engineering visiting on an exchange program with the University of Buenos Aires, was translating as much information as possible to improve the French Wikipedia. Experts came to share knowledge and anecdotes, like one about the amazing spins and turns in the air performed by dancers on the stage. They’re apparently affectionately called “tramoyas” (props) behind the scenes. I am particularly touched by the testimony of Amalia Pellizzari de Hermitte, granddaughter of the owner of the company that constructed the Teatro Colón in 1889–1908: “It hurts a little but I think I am ancient history by now,” she says half amused and half moved. She reveals that her father, who at the time of the construction of the theatre was not older than ten, played football on the initial outline of what would later be the foyer.
Shortly before five o’clock, I uploaded four extra paragraphs to the main article and re-read the article. What I saw now was entirely transformed by the extensive contributions of the 150 participants and fellow editors, but isn’t this what Wikimedia really is—a living organism in constant reproduction? It is now up to the more experienced editors to revise our work and decide what stays, what goes, and what is changed. Work was finished for today.
This editathon was organized by Wikimedia Argentina and the City Government’s Laboratory of the Ministry of Modernization, together with Teatro Colón.
Giselle Bordoy, Communication manager, Wikimedia Argentina
Delfina Krüsemann, La Nacion