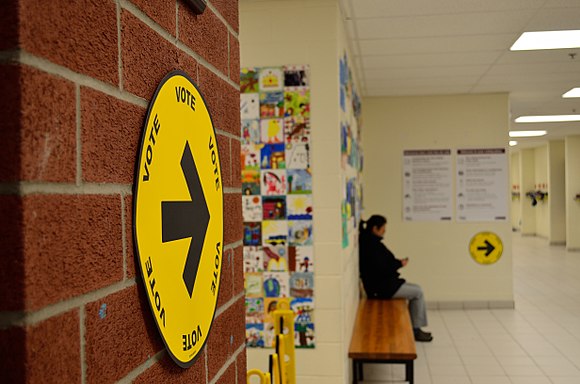 Voters took to the polls in Canada on Monday. Photo by Raysonho, in the public domain.

On Monday, Canada held its 42nd general election to determine the 338 Members of Parliament for 2015 to 2019. The election was won by the Liberal Party of Canada, led by Justin Trudeau—son of former Prime Minister Pierre Trudeau—with 184 seats won. The Conservative Party of Canada, which had been led by Stephen Harper, won 99 seats and became the official opposition after nine years in government.

The New Democratic Party, led by Tom Mulcair, came third with 44 seats, Bloc Québécois now have 10, and the Greens finished with one seat.

The Liberals’ 148-seat gain was the largest-ever numerical increase by a party in a Canadian election, and their total of 184 is the most seats won by a single party since Progressive Conservative‘s total of 211 in 1984. They were also the first federal party to win a general election without having been the Official Opposition following the previous election.

Turnout was recorded as 68.5 percent, the highest figure since 1993. Harper resigned as leader of the Conservative Party shortly after the result was confirmed. 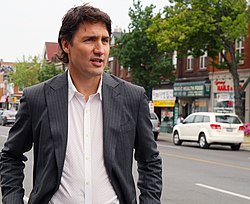 Justin Trudeau, pictured in 2014, will take up office as Prime Minister of Canada at some point next month. Photo by Alex Guibord, freely licensed under CC-BY 2.0.

Despite being an event with a reasonably predictable title and layout, the article for this week’s election wasn’t initially drafted until 2011, around five months before that year’s election was scheduled to take place. Because of the way Canada’s election system works, the date was never certain—Harper may have called a snap election, as was his right as Prime Minister—so the first few days of the article’s development were spent determining how best to phrase the upcoming election. After all, it was not necessarily an election taking place in 2015.

Editors initially disagreed on whether an article on an election scheduled for more than four years in the future should exist at all. An earlier version of the article was nominated for deletion in March 2011, and editors decided that “there is not yet anything useful to say about this future election”.

The current article was, unsucessfully, nominated under its “2015” title in May, a discussion which resulted in a stalemate. Moving it back to the less precise “42nd Canadian federal election” title quelled some concerns here, though the dispute remained a key part of the article’s development until Harper “dropped the writ” in August. It was only then the page was finally and permanently moved to its current, date-including title.

Back at the article’s creation, the Liberal Party was actually led by Michael Ignatieff, who was replaced by Bob Rae a few weeks later. Trudeau, now Prime Minister-elect, didn’t take charge until 2013. 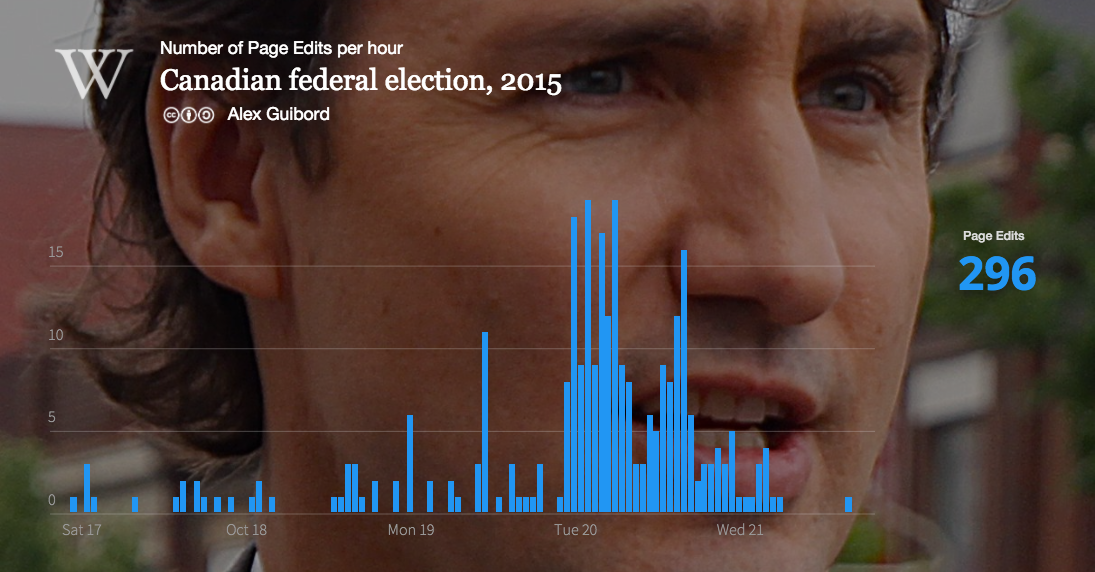 Almost 300 edits to the article were made in the last five days. Image by Alex Guibord, freely licensed under CC BY-2.0.

Altogether, the article has recieved more than 2,000 edits since its initial drafting. Of those, more than 1,000 were made this year, and 423 were made just this month—almost a quarter of all edits.

It goes without saying that the majority of the edits related to the altering of statistics on the night. Indeed, there was a notable uptick in edits on election night, as results came in gradually from each riding.

Opinion polling throughout the campaign was thorough, and ultimately proven accurate. Image by Galneweinhaw, freely licensed under CC BY-SA 4.0.

Soon, the Liberals peeled ahead, and it seemed that opinion polls—also chronicled in the article—were proving correct in predicting a Liberal majority. Commons user Galneweinhaw, who has used R to make a number of opinion poll graphs in the past, created one here documenting polls stretching back to August 2015, showing the ebbs and flows of political support across the campaign.