Atrium of the Newseum. Photo by Fletcher6, freely licensed under CC-by-3.0. 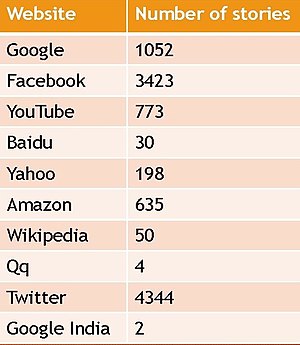 This introduction was accidentally left off this blog post when it was published: “Community view” is an ongoing series where Wikimedia community members express opinions on aspects of the Wikimedia movement.

In a panel session I put together for WikiConference USA 2015, held recently in Washington, DC, I put a heavy emphasis on how the poor news coverage of Wikipedia in the news media needs to be bolstered by community-generated journalism like the Signpost, a news journal about the English Wikipedia and the Wikimedia community.
Both qualitatively and quantitatively, news coverage is inadequate for a website and movement as large and influential as Wikipedia and Wikimedia. The news media has little understanding of the mechanics of Wikipedia, the role of the Foundation, non-Wikipedia Wikimedia projects, and other important issues involving the encyclopedia and the community. The coverage we usually see is neither in-depth, nor specialized, nor systematic.
Preparing for my presentation, I struggled to find metrics that would reflect this. Comparing the coverage of Wikipedia to other Alexa top-ten websites was a good way to measure Wikipedia against institutions of similar global reach and importance, or at least size. Using the ProQuest NewsStand database, I counted the number of mentions each of those websites received in the New York Times, the US newspaper of record. Looking at the results (see chart at right), the analogy seems obvious when you see that the numbers for Wikipedia are almost as low as that of Google India and the Chinese websites Baidu and QQ.
To the English-language news media, Wikipedia is a foreign country. They don’t speak the language, they don’t know how anything works, and they can’t even ask ¿Dónde está la biblioteca?
We already have a preexisting program that takes Wikipedia into not just la biblioteca but into a whole host of the world’s great cultural and scientific institutions, the Wikipedian in residence program. Wikipedians in residence serve as a sort of ambassador to the encyclopedia and related projects and encourage the institutions where they are embedded to embrace the site and open-access content. I met a number of these Wikimedians at the conference who are doing important outreach work at places like the National Archives and Records Administration and the Centers for Disease Control and Prevention.
There’s no reason that similar work couldn’t be done at the New York Times or the Newseum. This is not a new idea, and while it’s been suggested before, given the current robustness of the WiR program and the GLAM initiative, and the fact that these programs receive greater news media coverage than most other Wikipedia-related projects, it’s time to push for this again.
This all struck me while I made a spontaneous visit to the Newseum, where the news media its own rich cultural history on display: from newsbooks dating from the early days of print to the journalists who died covering stories like the September 11 attacks.
There are plenty of stories here to be told, and a Wikipedian in residence could help tell them. In the process, they could help educate the media about how Wikipedia works and let them know that there are stories worth telling in the Wikimedian community too.
Robert Fernandez
English Wikipedia administrator

The views expressed in this blog post are not necessarily those of the Wikimedia Foundation or Wikipedia; responses and critical commentary are invited in the comments section below.

This post was originally published in the Signpost; it was adapted and edited for publication on the Wikimedia blog.