New Zealand, pictured playing against Namibia, are through to their fourth final. Image by sebastian1906, freely licensed under CC BY 2.0.
This year’s Rugby World Cup, the eighth edition of the international rugby union championship, is in full force ahead of the final on October 31. This weekend saw the semifinalists—South Africa, New Zealand, Argentina, and Australia—take to the field at Twickenham in London.
Matches 43 and 44 were played on Saturday and Sunday, respectively, in front of crowds of more than 80,000. New Zealand’s All Blacks played out a tense 20–18 victory over the Springboks of South Africa, with Dan Carter scoring his first drop goal in over three years. The other semifinal was more one-sided; despite a late surge from the Pumas of Argentina, Australia held on to a 29–15 win.
It sets up a fully Australasian final next weekend—and each side became the first and second teams to make four World Cup finals. 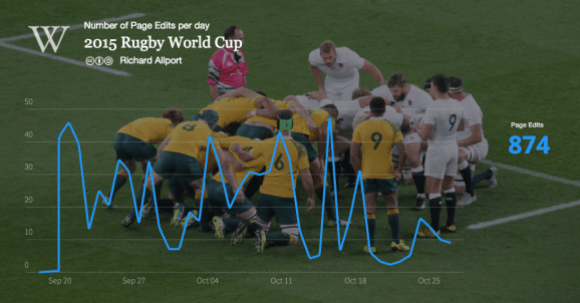 Edits made per day to the “2015 Rugby World Cup” article on the English Wikipedia during the tournament. Image by Joe Sutherland, freely licensed under CC BY-SA 4.0.
Wikipedia’s entry on the 2015 edition of the championship has existed since March 2006, when New Zealand resident (but South Africa fan) Arguss wrote an initial blurb suggesting where the tournament might be held. At that time, the 2011 tournament had just been awarded to New Zealand, with the 2015 and 2019 hosts to be announced in 2009.
Arguss was a member of WikiProject Rugby Union, a project dedicated to articles related to the sport with around 170 members at the time of writing. It covers almost 15,000 articles, ten of which are “featured”—the highest level of acclaim an article can have on Wikipedia.
The initial development was, perhaps predictably, quite slow. It was not until England submitted their bid in May 2009 that work on the article sped up; there was a peak of editing in July of 2009, when the bid proved successful. Prawn3944, a user with just over a thousand edits to his name, played a key role in updating the article following the announcement from the International Rugby Board.
Since then, the vast majority of the 2,220 edits made to the article have been while the tournament has been on. Almost 900 edits have so far been made to the article since the competition began on September 18. It’s proven popular with readers, too. While the tournament has been ongoing, the article has received more than one million views in total.
The final, also to be played at Twickenham, naturally has an article of its own, documenting each team’s journey to the final from the group stage through knockouts. It will likely see a flurry of enthusiastic rugby fans descend upon it to announce the 2015 Rugby World Cup champions on October 31.