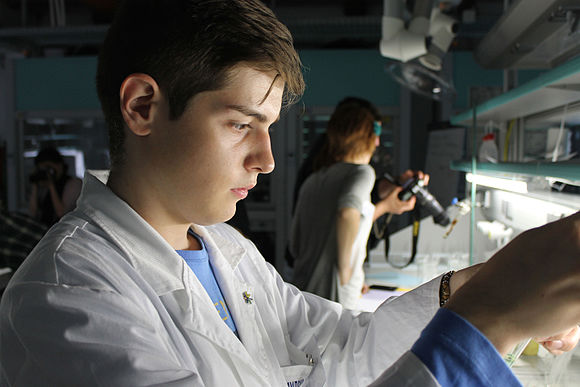 Student working on experiments. Photo by Milos Aleksandric, under a CC-BY-SA 4.0 license.
One of the things that Neda Subakov likes about attending Petnica Science Center (PSC) is the access to professional equipment and people who are engaged in photography, and the relaxed atmosphere during the work. “The photo lab is available 24 hours a day!” she stated. 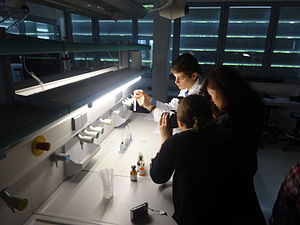 Students working on shots. Photo by IvanaMadzarevic, under a CC-BY-SA 4.0 license.

PSC is an autonomous and independent organization engaged in the development of scientific culture, scientific literacy, education and culture. During the year, PSC organizes various workshops and trainings which attract large numbers of high-school students—so one of Wikimedia Serbia’s (WMRS) goals this year was to partner with them. The original idea was to have a first workshop in Petnica that would eventually develop into an ongoing program there.
With this in mind, we planned a Wiki Photo School, a three-day photo school with lectures and workshops organized in Petnica Science Center, for all participants who were interested in training to photograph chemical experiments.

Picture of the workshop in Petnica. Photo by IvanaMadzarevic, under a CC-BY-SA 4.0 license.

We aimed to generate high-quality multimedia content on Wikimedia Commons around a theme that was not well covered on the project. We would then include it in Wikipedia articles to animate our main target groups, and introduce them to Creative Commons licenses and Wiki projects. These target groups included not only students, but professors and collaborators who can be involved promoting Wikimedia’s mission.
Our rationale for the project started with the people who come to Petnica: they have a similar motivation to many contributors in the Wikimedia movement, in that students don’t get a reward for the classes (attendance is not mandatory, and they do not receive grades). They come simply to learn and improve their skills. We also assumed that educating these target groups on the use of Wikimedia Commons and CC licences was a first step towards further collaborations. We hoped this would bring us many motivated volunteers who could work on Wikipedia or Commons.

Shared lesson: when focusing on increasing content, find a balance between quality and coverage

Participants attended lectures and workshops on photography, WMRS projects, Wikimedia Commons, and CC licences for three days. The idea was for each person to successfully choose a license and upload at least one piece of content of good quality on Commons, and use that content in some other Wikimedia project.
When asked for her opinion on Wiki projects, Neda says she supports them as it can be useful for young people: “At first, I had problems uploading photos on Commons, but I quickly managed that problem with the help of a mentor”, she states. Workshops went great, atmosphere was excellent, participants were highly interested in learning from their lecturers. The most exciting thing for them was using their photo on an article on Wikipedia, not just in Serbian but in other languages as well.
We managed to produce high quality content, measured both by Commons’ “Good Photos” tool, and professional photographers through photo analysis at the photo school itself.

Photo by Kjovana, under a CC-BY-SA 4.0 license.

Even though we achieved our goal in terms of increasing free content on Wikimedia Commons, we didn’t get as many photos on Commons as we estimated.[1]
Participants were highly invested in quality photography and uploading imperfect photos was not an option for them. Even though an instructor showed them how to edit photos during the workshop and improve their quality, there was no time to edit every photo. We explained that good quality photos are a plus, however it is also true that standard quality photos are better than no photos at all. Despite this, they found that better option would be to upload photos after editing them, but after the workshop ended, follow-up with participants failed.
One of the things we learned is that we need to work on communication with participants via mailing list and social network groups: send them reminders, brochures with instructions on how to edit (in case they forgot the rules), call them to events (like exhibitions, photo-tours, edit-a-thons), organize some of the activities in their town, are few key messages that might be effective. At the workshop in Petnica, we realized a good motivating action would be to have participants choose best photos, print them and open a small exhibit to present the result of the project. When asked what he would change, Miloš Aleksandrić, a participant of the acitivity, mentioned he would change the advertisement of the activity, to involve more actors in education. He also thought Wiki Photo School could take several days, to have more time for all activities.

Where do we go from here?

In annual plan for 2016, we won’t continue Wiki Photo School in Petnica. Further cooperations are possible, but we should consider changing motivation factors, and think about different approaches. Generating photo and video materials are always the easiest ways to animate new volunteers; however still there are challenges regarding photo and video upload. We also want to consider conducting standard Wikipedia workshops without photo school. It would be more focused on editing rather than uploading content. For annual plan 2016, we have accepted two projects by two instructors at Wiki Photo School. In this sense, even though this activity did not have the outcomes we expected in terms of content quantity, we think this it has been a positive outreach event.
For 2016, the Wiki Photo School also had positive outcomes in terms of outreach efforts: Marija Gajić and Vladimir Pecikoza, two of the instructors and newly converted editors to Wikimedia projects, have each proposed an annual project to Wikimedia Serbia. Named Valjevo Mountains Through the Lens and Wiki Loves Dragonflies, both have been accepted.
When asked why they continue to work on Wiki projects, Gajić said, “it was the Wiki Photo School that inspired me and gave me the idea of how to take something that I do (insects) and get it closer to a large number of people, of different ages and interests.” Gajić has become a very active editor, taking part in Wiki Loves Earth, WikiCamp, and also recently starting the #100wikidays challenge. In this sense, even though this activity did not have the outcomes we expected in terms of content, we believe it has been a positive outreach event.
1. You can see the Global Metrics table for this program here.
You can find this and other shared lessons in Wikimedia Serbia’s progress report.
Ivana Madžarević, Project Manager and Community Support of Wikimedia Serbia.
María Cruz, Communications and Outreach Coordinator for Learning and Evaluation team, Wikimedia Foundation
«What I learned» is a blog series that seeks to capture and share lessons learned in different Wikimedia communities over the world. This knowledge stems from the practice of Wikimedia programs, a series of programmatic activities that have a shared, global component, and a singular, local aspect. Every month, we will share a new story for shared learning from a different community. If you want to feature a lesson you learned, reach out!