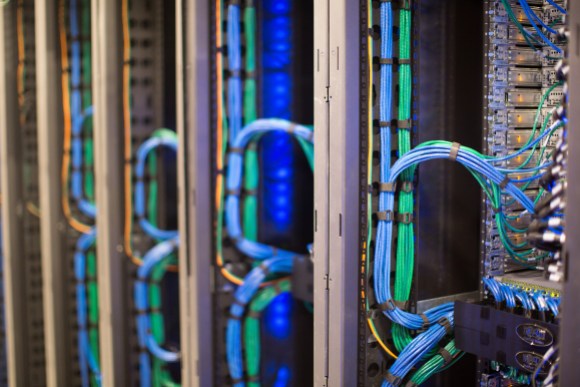 Servers holding Wikipedia and related projects. Photo by Victor Grigas, freely licensed under CC BY-SA 3.0.
After almost fifteen years of providing the world with collaborative free knowledge, the English Wikipedia today surpassed five million articles.
The milestone was reached with an article on the persoonia terminalis, a shrub of the family Proteaceae native to eastern Australia. It was created by Cas Liber, an Australian editor who has created almost 1,500 articles on the English Wikipedia in his more than 140,000 edits.
Persoonia terminalis joins an exclusive club including Jordanhill railway station, El Hormiguero, Beate Eriksen, and Izbat al-Burj—all previous million-article milestones.
We asked Liber what makes Wikipedia special, and he told us that in a world overflowing with information, “Wikipedia provides an opportunity to make sense of chaos.” Moreover, it serves “a great bridge between information for laypeople and detailed scientific information for enthusiasts and professionals,” educating untold numbers of readers.
The English Wikipedia community has written a crowdsourced statement on the milestone, urging potential editors to help improve the many articles which still need improvement and expansion among the five million now available on the site. It contains a range of resources for new editors, including advice on where to get started, where to get advice from fellow editors, and links to tutorials and guides on how to make that all-important first step towards editing Wikipedia.
Wikipedia is the only website run by a non-profit organisation in the top 35 most popular websites. The total size of Wikipedia is massive, falling just short of 30 terabytes. It’s estimated that articles on Wikipedia use at minimum 18 million references, and comprise more than 2.5 billion words in total; it is the world’s go-to point of reference attracting more than half a billion pageviews every day.
Today, Wikipedia now covers more topics, more perspectives, and more voices than any other knowledge compendium on the planet. It is the longest encyclopedia in world history, surpassing even the 22,937-chapter, 40-cubic-meter Yongle Encyclopedia of 1408. The English Wikipedia alone is authored by millions of volunteers from all over the world—from more than eight million logged-in accounts and an untold number of anonymous editors—who write and share their knowledge on anything and everything, from the meaning of life and natural phenomena, to musicians and villages.
All of it is completely free for anyone in the world to consume, use, and remix.
Wikipedia has grown quickly after its launch on January 15, 2001, and by November of that year, the first iteration of its iconic main page was published. The English Wikipedia’s two-millionth article appeared in 2007, its three-millionth in 2009, and four-millionth in 2012. Our movement’s mission, to provide the world with the sum of all human knowledge, remains constantly in development.
Despite reaching this milestone, the English Wikipedia is still a work in progress, as its own community noted in its five million announcement. One volunteer estimates that the total number of articles needed to cover the entire sum of knowledge is at least over 100 million. At the present time, many of the English Wikipedia’s current articles are short, containing only basic information, and the topic selection is biased towards Western, particularly Anglophone, content. Liber told us that “we still [have] loads to do,” but if this accomplishment inspires people to “edit and look at the world around them, then all the better.”

The community is, however, undertaking initiatives to improve the project’s coverage of marginalized topic areas—such as the women’s scientist project and Wiki Loves Africa.
Here’s to the next five million!
Ed Erhart, Editorial Associate
Joe Sutherland, Communications intern
Wikimedia Foundation
As promised, this post has been updated with comments from Cas Liber.