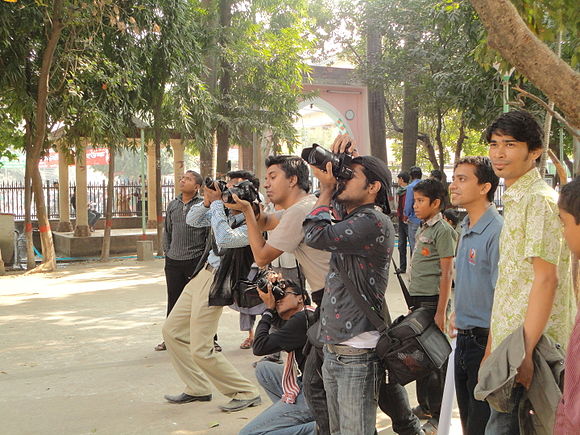 Greetings! With about 250 million native and about 300 million total speakers worldwide, Bangla is the seventh most spoken language in the world by total number of native speakers and the eleventh most spoken language by total number of speakers. It is the only language in the world which is achieved by a language movement; people sacrificed their lives for the right to read, write, and speak the language Bangla. Building an encyclopedia in this language was unavoidable.
Bangla Wikipedia started its journey in January 2004. Back then, the people of Bangladesh had a little interest in Wikipedia. A few students and scholars used the English Wikipedia, but it was not accountable. Besides that, there were various difficulties contributing in Bangla. One of the pioneer of the Bangla Wikipedia, Dr. Ragib Hasan, said that “the biggest challenge was writing something on internet in Bangla. The Bangla Unicode was not supported on most operating systems, only few websites on the internet supported Bangla Unicode, and users had difficulties configuring it. Moreover, the idea of writing something with Bangla Unicode was new. … in the beginning, the idea of a Wikipedia in Bangla was not actually workable.”

The whole scenario has been changed in 2006. During that time, the Bangla blogging world was growing slowly, and many people became accustomed to Bangla computing—thanks in part to a free and open-source Bangla typing tool, Avro. On March 25, 2006, a Wiki team was created by the Bangladesh Open Source Network (BdOSN) to popularize Wikipedia through out the country. The aim was to represent the country to the world through Wikipedia and build a complete encyclopedia in Bangla. At that time, Bangla Wikipedia had only 500 articles. But the ‘BdOSN wiki team’ was not alone. They managed to spread the word through some newspapers and start a Bangla Wiki mailing list. Soon, many Bangla-peaking people from home and abroad joined them in this dynamic project. As a result, by theend of the October, Bangla Wikipedia got to 10,000 articles. Among the South Asian language Wikipedias, Bangla Wikipedia reached that milestone first, and many of these articles were illustrated with photos from the demonstrator of Bengali Language Movement Dr. Rafiqul Islam, who donated all his historical photographs taken during the language movement to Wikimedia Commons.
The community now began increasing the quality of their articles. Between 2009 and 2010, Bangla speakers from West Bengal, India also started to contribute to Bangla Wikipedia. In the meantime, the Wikimedia Foundation started their operations and in October 2011 a ‘local chapter was approved in Bangladesh by the Foundation to promote educational content in Bangla.
Now, Bangla Wikipedia has more than 38,000 articles on various topics with over 500 active editors per month. People from around the country now regularly arrange workshops and meet-up with active Wikipedians.
On February 26, 2015, Jimmy Wales—the founder of Wikipedia—visited Bangladesh for a celebration programme that was organized to mark the tenth year of Bangla Wikipedia, a great motivation for Bangla Wikipedia community. In his keynote, Jimmy said that according to the article depth, Bangla Wikipedia is rated quite well. It may also be noted that Bangla Wikipedians from Kolkata, India arranged a similar event, and both of the events were attended by Wikipedians from both sides.

The views expressed in these stories are not necessarily those of the Wikimedia Foundation or Wikipedia; responses and critical commentary are invited in the comments section below.