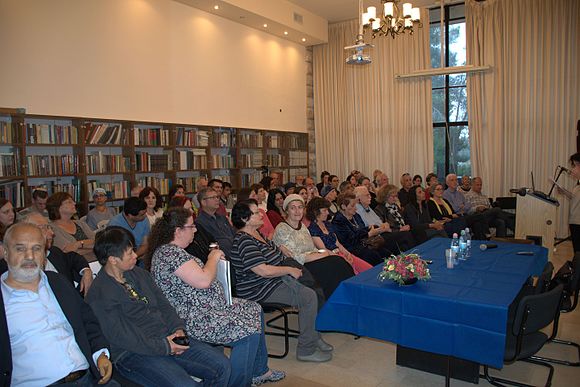 The closing event of the first Hebrew Wiktionary course in Israel, held at the Academy of the Hebrew Language in Jerusalem. Photo by Chen Davidi-Almog, freely licensed under CC BY-SA 4.0. 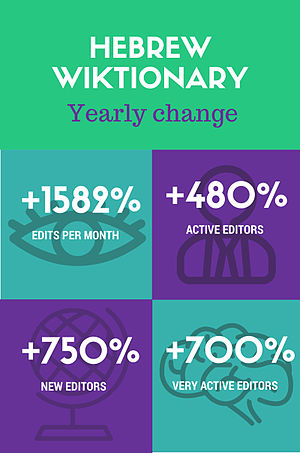 2015 has been a pivotal year for the Hebrew Wiktionary, thanks to the small community and Wikimedia Israel joining forces to strengthen the project together. By collaborating together and with the Academy of the Hebrew Language, we started an educational course and brought new editors into the project.

The Hebrew Wiktionary community can be described as independent, but limited in size. The level of activity in the project in 2014 was very low—428 edits in July and 154 in August, for instance—and leaned heavily on a small but stable group of writers. Their work was divided between creating entries and necessary regular maintenance of the project; very few new writers joined in. We felt that the project needed a “shot in the arm” and could use new blood to drive policy innovation and to integrate new writers into the activity.
We believe that the chapter, being an external entity that is nevertheless familiar with and committed to the Wikimedia communities, could play an important role in the process of revitalizing the community and promoting its becoming an independent and prosperous one. Four key elements enabled the revitalization of the community:

It started with an initial inter-organizational thought process with the purpose of promoting a joint project. Last December we contacted the Academy of the Hebrew Language, Israel’s highest institution for the study of the Hebrew language whose decisions are officially binding.
Recruiting an institution of such prestige has created a sense of pride among the Hebrew Wiktionary’s volunteers and greatly helped in recruiting new volunteers. A shared vision between the Academy of the Hebrew Language and the Wiktionary community—to contribute to the Hebrew language and expand the Hebrew Wiktionary community—has created a natural and meaningful connection and serves as a golden opportunity for promoting the project. The academy, Wiktionary volunteers, and the chapter are now working hand in hand on the production of a tutorial that combines the teaching of practical editing and the fundamentals of professional lexicography. The tutorial was selected to be the first step in an outline for the establishment of an independent and growing community.

Relationships in the Community

It was necessary to cooperate with community members to create the new editor’s course. The first step was finding contacts. We tried locating them through user pages, the village pump, and editors on other projects, but in the end the most successful strategy was by going through the project’s only bureaucrat.
Integrating new people into the activity of an independent community requires us to help them adapt to the community’s spirit and courses of action. Fortunately, the three editors who offered to help us were willing to do so—a crucial step towards starting this project.

We began with a meeting between the three contributors and the activity coordinator of Wikimedia Israel for initial introduction and to come up with an objective and vision for the Wiktionary course and Hebrew Wiktionary. The volunteers discussed ways to improve the project and created a list of tasks to be performed before the course begins. The course served as an excellent opportunity for the rejuvenation of the project, and it seems that most of the active editors took it upon themselves to make it a success. New help pages were written, lists of missing entries were created, etiquette was formulated for the project, new officials were appointed, the full guide for the Wiktionary reader was updated, and even the project’s logo was updated.
During the following few months, additional updates were presented regularly in the Wiktionary buffet regarding progress of the course and the volunteers also came to the help of new writers, initiating them and providing them with comments on the entries written during the course.
The second meeting included representatives from the Academy of the Hebrew Language and defined the work plan of the course. It was decided that the course would be jointly taught by volunteers and representatives of the Academy. The syllabus was created together in order to create a compatible course structure with lessons that complement each other in terms of the technical and content aspects of writing.
The behind-the-scenes work invested in production of the course was very intensive. Deciding on weekly sessions did enable an emphasis on continuity, individual effort, commitment, and perseverance on the part of course participants, yet the volunteers were called upon to work ‘round the clock’ dealing with monitoring, initiation, creating lesson plans and teaching, as well as examining learning assignments that the participants prepared at home. Their investment and commitment are undoubtedly the reasons for course success.

In order for a community, active in a specific content field, to survive and prosper, and to be motivated for further work and creativity, it is important to continuously maintain high levels of activity. We felt that keeping the volunteers active was significant, as well as recruiting the course graduates and maintaining a high degree of ongoing project liveliness. 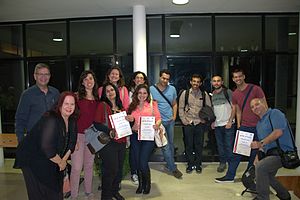 The closing event of the first Hebrew Wiktionary course in Israel. The event was held at the Academy of the Hebrew Language in Jerusalem. Photo by Chen Davidi-Almog, freely licensed under CC BY-SA 4.0.

We therefore decided, after a few months in which the project editors continued to further improve and implement course deliverables, to start working on the next project. Volunteers expressed a desire to hold a missing entries writing marathon that would encourage course participants to stay in the project. Eventually, a decision was made to launch a first-of-its-kind prize competition for the writing of lexicographic entries. Additional important objectives of the contest were to advertise the project to the general public and the crowds of Hebrew language lovers, as well as expanding the community even further.
First, a message appeared in the Wiktionary Village Pump, inviting editors to participate in planning and producing the competition, with an invitation to participate in the first planning meeting, held at Wikimedia Israel’s offices. Later on, a Wiktionary volunteer created a list of 500 (!) entries missing from the dictionary. At the same time, a project page for the competition was created. Volunteers were assigned different functions such as Contest Secretaries, Referees, and people to monitor and provide assistance through the help counter. Both new and veteran volunteers joined in to participate in this project, primarily to assist and answer questions of participants in the contest, and also for the judgment and filtration of the entries. After discussions and consultations with Academy members, criteria for the right way to write an entry in Wiktionary were created and published for the first time ever, and the entries were judged based on these criteria.
Linguists and lexicographers who are members of the Academy of the Hebrew language joined the Judgment Committee, as well as language experts who are well-known in Israel.
To date, we are working on the production of a festive community gathering for Wiktionary editors. We now put a stress on encouraging and pushing forward for projects initiated by the community itself. While the Wikimedia Israel chapter would support and help, it would be strictly up to the volunteers to lead the projects. In addition, we hope to launch one more course in early 2016.
We hope that the movement, initiated during the recent year, will continue to develop towards the creation of an independent initiative community.
In conclusion, during 2015, close to 300 new entries were written and about 130 were extended. Some 50 contributors participated in the projects (of which 33 are new). Compared to last year, there was an increase of 750% in new editors’ activity and an increase of 480% in number of active editors in the project. Compared to the same months last year, an almost 1,600% increase is evident, in the number of edits.
Community is the fundamental basis for the existence of all Wikimedia projects. It is our job, as an organization in the Wikimedia movement, to help communities to prosper. In order for a community to thrive, tight work relations are required among the community members and between the community and the Chapter. Finding common ground is also necessary and in this case it was the commitment of the volunteers, the Hebrew Academy and the Chapter, to the efforts for expanding the project. Volunteer communities don’t always find in themselves the strength to promote younger generations, and this was the main role that we took upon ourselves when assisting in executing the various activities that would bring new editors. Providing support can be described as the major role of Wikimedia Israel.
Chen Davidi-Almog, Activity and Resources Coordinator
Wikimedia Israel