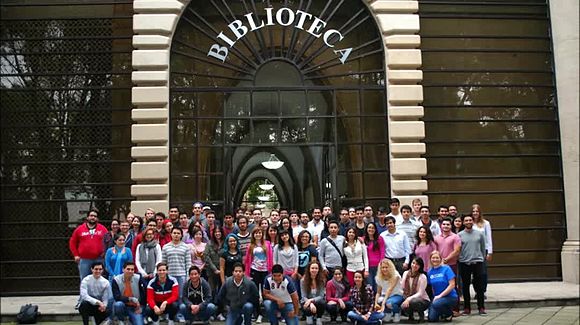 Short montage of student work during Reto Wikimania. Video by Thelmadatter, freely licensed under CC BY-SA 4.0.
Semana i (in English, “i Week”) is a term that invokes curiosity among those of us here at the Monterrey Institute of Technology and Higher Education, as well as among people, organizations and institutions that are dedicated to academic, cultural, social service, technological, business and industrial matters. The goal of Semana i is to engage students with technology by replacing their normal classroom activities with intensive project-based work that has real-world applications for one week. These activities are called retos (in English, “challenges”). Almost 100 students chose to contribute content to Wikimedia projects as their challenge. From September 21 to 25, 2015, students and staff at two campuses in Mexico City worked for five days to improve coverage of areas of the south and west of the city both on Commons and on Spanish Wikipedia. Both campuses led Wikiexpeditions, building on the success of the school’s first Wikiexpedition to Tepoztlán in March 2015. Both campuses dedicated time to the creation of articles about these areas.

The Mexico City (South) campus focused its energies on the southern borough of Xochimilco and Tlalpan, which both have a mix of urban and rural areas. In particular, Xochimilco is known for its network of canals, what is left of an extensive lake system that covered the Valley of Mexico and is a World Heritage Site. While these canals were extensively photographed, one of the main objectives of this wiki expedition was to photograph lesser known sites, but still important, such as colonial era chapels and other historic monuments, as well as the borough’s archaeological museum and the Acuexcomatl Environmental Education Center. Students were also encouraged to take pictures of everyday life as they encountered it during their wanderings.
The approximately 75 students who participated were divided into small groups, each with a different area of Xochimilco and/or Tlalpan to cover. About twelve of these participants were foreign students, primarily from Europe, who were spread out among the groups so that these groups could experience their exploration from two points of view. Students had to decide how to cover their areas and divide their work. Most opted to stay in their entire group or pair off rather than explore individually. One of the objectives of the project was to write good descriptions of the places they photographed. While teachers and organizers were able to provide some documentation, much was not easily available and a number of groups took the initiative to visit borough offices for information and to ask caretakers. Some even received tours. The Acuexcomatl Center gave their group a tour and waived the admission fee, stating that they welcomed the effort the share what the center does online.

One of the participants was the granddaughter of the official chronicler of the Xochimilco borough, Sebastián Flores Farfán, who, when he heard of our efforts, asked to come to the closing of the event. Of course he was quite welcomed and had a chance to hear some of the student reports. These reports gave very valuable feedback on the event. Some students stated that they enjoyed the project as it gave them a chance to see aspects of their city they did not know existed, and they enjoyed using photography as a learning tool. One complaint was not being able to take photographs of some of the landmarks by authorities, who often wanted some kind of official permission in order to cooperate.
All participating students were required to upload 50 photographs to Commons (or video clips worth 3 photos each) and all then had the choice to upload another 50 or work on a short article. In total, the participants uploaded 5264 photographs, 8 videos and 36 articles (link here). Almost all of these articles were created or expanded in Spanish Wikipedia, but some articles such as Xochimilco and Niñopa were translated into French, Swedish and Danish.

Like last semester, the Santa Fe campus again participated with Wikimedia Commons and Wikipedia, but with a more concrete objective. This time, the focus was on the traditional Mexico City neighborhood of San Ángel, located in the southeast of Mexico City. It is an emblematic section of the city, an “obligatory” place to visit for those who live in the city as well as national and international tourists, along with other areas such as Coyoacán, Mixcoac and Xochimilco, as despite the march of urban sprawl, it has preserved many of its historic monuments, customs and traditions that define it.
When we organized the Wikipedia San Ángel challenge, we did not expect the interest from students that we received. At first we thought thirty places would be sufficient, but this was not the case. There was so much interest in the project that we had to raise this number to forty. This demonstrates in an optimal way the advantages that working with a site like Wikipedia offers. This is also clear from the references that students used to create articles, a mixture of electronic sources along with books and magazines.
Since contributing to Wikipedia should not be taken lightly, before the San Ángel visit, we chose several sites of interest, looking through the Wikipedia to see what was already covered. Students found that a number of sites had only incomplete articles, were mentioned only in the article on San Ángel… or neither. Foreign students found that articles were missing on the areas in languages such as German and Polish.
Students were first trained in research techniques, including what constitutes reliable sources by library staff then about Wikipedia with a visit by Leigh Thelmadatter of the Mexico City Campus, who offered her enthusiasm about the project as well as a solid understanding of the Wikipedia universe, motivating students.
Wednesday was dedicated to the “expedition” to San Ángel, arriving at the heart of the neighborhood, the Plaza San Jacinto. From there students wandered the area taking photographs of what caught their attention, such as monuments, typical buildings, various installations, people, animals and other aspects that make San Ángel unique. Each student was asked to upload fifteen photographs to Wikimedia Commons. In the end, sites that were covered photographically included the La Bombilla Park, the Risco House, the Library of Mexico’s Revolutions, the Diego Rivera and Frida Kahlo Studio House Museum, the Marquesa de Selva Nevada House, the Casa Blanca of San Ángel, the Soumaya Museum (San Ángel), the Isidro Fabela Cultural Center, the Del Carmen Market, and others. There were difficulties such as students needing permission to take photographs, but often these were resolved by the students themselves and receiving help with references from the locals of San Ángel. In the end, this campus uploaded 543 photographs and ten articles to Spanish Wikipedia, as well as improved the existing article on San Ángel.
Thursday and Friday were dedicated to revising, categorizing and writing the descriptions of the photographs for Wikimedia Commons, along with working on articles to be created or expanded. For this aspect, we worked not in a classroom but in the library’s new learning commons, which allowed students to concentrate on their work such that many lost track of time.
Leigh Thelmadatter, Wiki Learning Tec de Monterrey
Alavaro Alvarez, Wiki Learning