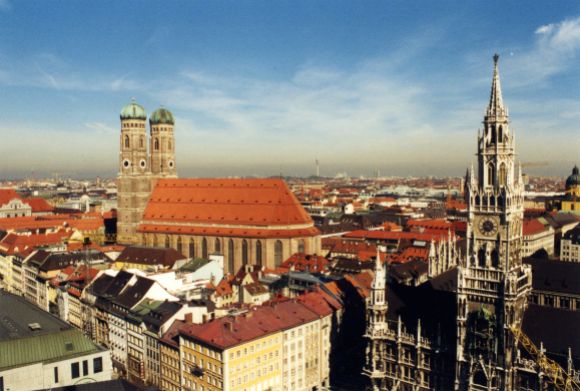 The Munich skyline, seen here in 2001. Image by Stefan Kühn, freely licensed under CC BY-SA 3.0.
We are happy to announce that the court of Munich has ruled in favor of the Wikimedia Foundation in Dr. Evelyn Schels v. Wikimedia Foundation, Inc.. In May 2015, Dr. Schels filed a lawsuit in Munich requesting the removal of her date of birth from the German Wikipedia page about her. Since Dr. Schels is a famous person and her birthdate was taken from a publicly available source, the court held that the Wikimedia Foundation did not infringe on her rights.
Dr. Evelyn Schels is a well known screenwriter and a director in Germany. In her lawsuit, Dr. Schels argued  that her general right of personality and her data protection rights were infringed because she did not consent to the publication of her date of birth in the Wikipedia article about her. She also argued that the presence of her date of birth in her Wikipedia article could lead to disadvantages in her job.
The Wikimedia Foundation responded by explaining the Foundation’s role as a hosting provider, why the publication was protected free speech and why Dr. Evelyn Schels is a famous person in which the public has a legitimate interest, including in background biographical details about her.
On November 13, 2015, the court of Munich ruled in favor of the Wikimedia Foundation. The judgment (translated in English) confirmed that the publication of Dr. Schels’ date of birth on Wikipedia did not infringe upon her general right of personality or data protection rights. The court recognized that a birth year made accessible by the Claimant herself through publicly available sources such as a book “would not remain limited to a small circle of people … but be accessible to a circle of users unlimited in theory.”
According to the court, Dr. Schels “has to be considered a person in which the general public is interested”. Indeed, as a renowned producer of documentaries, it is of interest to the public to know what movies she produced at which age. Thus, there is a public interest in her birthdate. Furthermore, the court emphasized that Dr. Schels’ birthdate is not the most private data that has been released. For instance, some data is available regarding Schels’ education and production activities from which one could reasonably determine her age.
The opinion further acknowledged the neutrality and objectivity of Wikipedia, noting: “The Wikipedia entry represents general information for the formation of public opinion, not a publication for the purpose of advertising or marketing … It does not appear to the court that the publication in dispute significantly affects the Claimant in any way.”
Finally, the court declared the transmittal of data to be admissible and declared: “[Since] The birth year is from a publicly accessible source, which [Dr Schels] herself has published, there is no reason to assume that [Dr. Schels] has an interest warranting protection in preventing the data transmittal of her birth year. In fact, the balancing of the general right of personality . . . with the communication interest … favors the latter [i.e. publication].”
Publicly available sources are critical for the existence of Wikipedia. Those who publish information and make it available to the general public should expect a large number of people to be able to find it online, including on Wikipedia, some day. The Wikimedia Foundation will keep supporting you—the global community—in constructing the best and most comprehensive encyclopedia possible, and will fight against lawsuits that seek to prevent the dissemination of free knowledge.
Michelle Paulson, Legal Director
Jacob Rogers, Legal Counsel
Wikimedia Foundation
* We would like to extend our sincere thanks to the attorneys at Schlüschen Müller in Germany, particularly Dr. Holger Müller, for their exemplary legal representation and dedication to the Wikimedia movement. Special thanks should also go to Gaetan Goldberg, WMF legal fellow, for his assistance on this blog post.