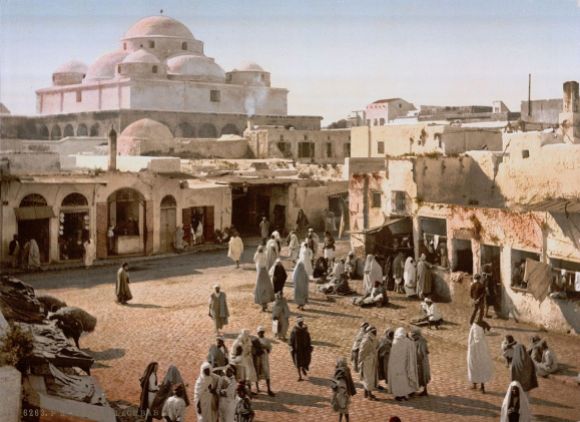 Tunis’ historic medina is the subject of a new Wikimedia project. Photo from the Library of Congress, public domain.
Tunis: today, it’s the capital and most-populated city in the country of Tunisia. In ancient times, it was the seat of Carthage, the grand empire destroyed by Rome in the Punic Wars. In medieval times, it was a major and militarily strategic city of several Arab empires.
It was during the latter’s time that the Tunis’ medina—a walled center area with narrow, sometimes maze-life streets common in many North African cities—was constructed. The MedinaPedia concept aims to host workshops to improve all aspects of Wikimedia’s coverage on Tunis’ medina, including Wikipedia articles, Wikimedia Commons images, or Wikidata entries.
A series of workshops is taking place in the Tunisian Association of the Preservation of the Medina – Tunis (ASM Tunis) headquarters. Volunteers will be gathered on a monthly basis and work in their spare time on four themes: madressas (schools), souks (markets), diar (palaces), and mosques/mausoleums. After the end of the project, which will last one year, we will place ceramic QRpedia codes in front of 145 selected monuments—all of which are notable enough to have dedicated Wikipedia articles, although it is likely that our list is incomplete and there are more out there.
The project started when I met Yamen Bousrih, a very motivated Wikipedian and Senior Business Analyst who helped me engage with the Wikimedia movement. MedinaPedia was born when Yamen pointed out the common interests between my NGO Carthagina, his association CLibre, and Wikipedia. The project was promoted first in the Tunisian stall during Wikimania 2014 in London.
Still, progress was slow as we concentrated on what we thought were more important initiatives, like Wiki Loves Monuments,  Wiki Loves Africa, WikiArabia, and Software Freedom Day. The project took off after we were put in touch with ASM Tunis; we were able to sign a memorandum of understanding that granted us free access to their extensive library collections.
In August 2015, we put out a call for volunteers to begin work on documenting Tunis’ historic medina for future generations—something we called “MedinaPedia.” We recieved awesome statements where volunteers shared their vision of a better-preserved heritage; we accepted a manageable thirty of them. These were mainly Tunisian students from around the country, but also included foreigners—for instance, we have a Japanese student who speaks fluent Arabic.
These students will take part in a series of twelve monthly Wikipedia workshops where they will create and expand Wikimedia’s knowledge relating to monuments residing in the medina of Tunis, focusing on four themes: madressas (schools), souks (markets), diar (palaces), and mosques/mausoleums. The students are not limited to Wikipedia articles; we are encouraging them to contribute to other Wikimedia projects like Wikimedia Commons or Wikidata. At the end of the project, we will produce ceramic QRpedia codes in front of the selected monuments.
At least three trainers from Wikimedia TN User Group, the de facto Wikimedia affiliate in the country, will be in attendance at the workshops, along with an unknown number of people from the global community.[1] They will take place at ASM Tunis’ headquarters, and at least one staff member will attend to help expand the acquired knowledge to the rest of the association.
We are hopeful that the experience we gain from these workshops can be duplicated in other medinas from around the world.
Emna Mizouni, President of Carthagina Organisation, member of Wikimedia TN User Group