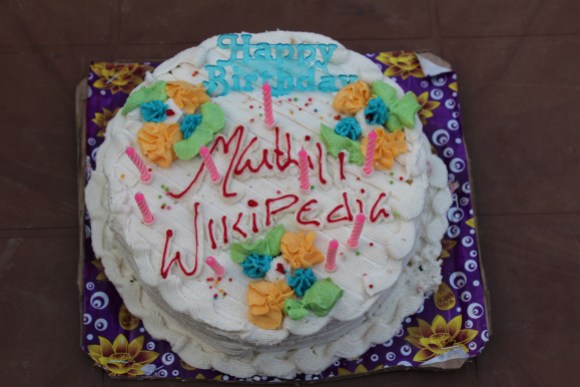 Maithili Wikipedia completed its first year on 6 November 2015. To celebrate, Wikimedians of Nepal and Rajbiraj Wikimedia Community team members have organized an event to facilitate the winners of first Maithili editathon and the anniversary celebration. Community members have organized a 45-day-long editathon to expand and create new articles on Maithili Wikipedia, which started on 1 October and lasted to 19 November. During the online edit-a-thon, 999 articles were created and modified—out of a total of 1,557 articles on the site.

Seven Maithili Wikipedians took part on the edit-a-thon competition, whose main purpose was to grow participation among Maithili speakers and editors. After the end of the competition Wikimedians of Nepal and Rajbiraj Wikimedia Community members organized an event to reward the winner of the competition and commemorate the anniversary.

The event and prize distribution was organized at Neta Chowk, Rajbiraj. In the programme, Maithili Wikimedians, Maithili linguists, and Maithili journalists spoke about the need for a Maithili Wikipedia and its importance. The winners of the edit-a-thon are Tulsi Bhagat (1st), Nilam Karn (2nd), and Bijay Chaurasia (3rd) and received awards from the Maithili Sahitya Parishad President Subha Chandra Jha. During the programme, the participants discussed:

The event ended with an informal session in which each of the participants was part of a ceremonial cake party. The event was reported in the Rajbiraj Today, News Today and Aajko Waatawaran newspapers of Nepal as well as the online Saptari Jagaran.
Biplab Anand and Tulsi Bhagat, Wikimedians of Nepal