Wikitraining in Mykolaiv National University. Image by Illia Korniiko, freely licensed under CC-BY-SA-4.0.
Being wholly committed to Wikipedia, we in Wikimedia Ukraine have no doubt that Wikipedia belongs in education—the more educators and authorities who know this the better. This month, a significant step forward was made in the expansion of the Wikipedia Education Program in Ukraine, as we welcomed a whole new region into the Education Program: Mykolaiv Oblast.
The story began, not uncommonly, when one lecturer in the Vasyl Sukhomlynskyi National University of Mykolaiv learned about the “Edit” button on Wikipedia articles and decided to share this with his students. Using the Education Program extension for MediaWiki, Taras Kremin, a docent (or assistant professor) in the Faculty of Philology, created the course “Culture of the South. 100 Literary Biographies“. One hundred articles about the writers, poets, historians, specialists in study of literature, and of Mykolaiv Oblast are to be created or improved during this course by 30 students.
Taras Kremin got in contact with Wikimedia Ukraine to help with training students to edit and format Wikipedia pages. On December 12th and 13th, several experienced Wikipedians held a Wikitraining event for these students. Afterwards, students said that they had either no idea that anyone can edit Wikipedia or considered that it was too difficult for them to do. Of course, a two-day training event, though rather extensive, is not enough to learn everything. However, after that training, students had faith in themselves as editors.
As Taras Kremin is also a Member of Parliament of Ukraine, he brought this idea with him to other authorities. People writing Wikipedia are contributing important content that Ukrainian media is not so rich with. Mykolaiv State Region Administration expressed its readiness to spread the word about Wikipedia to other institutions. So on the same day, a memorandum of cooperation between Wikimedia Ukraine and Mykolaiv State Region Administration was signed as well.
Oksana Yanishevska, Deputy Chair of Mykolaiv State Region Administration, had underlined that state region administration cooperated with Wikimedia—and not for first time. Back in 2013, they ran an article contest under the title “Mykolaiv Spring in Wikipedia” that resulted in 250 Wikipedia articles about famous sites and citizens of Mykolaiv Oblast. Today we still don’t have full lists of monuments of architecture in Mykolaiv Oblast needed for a Wiki Loves Monuments contest, but, hopefully, this will change soon; on one occasion Wikimedia Ukraine was even forced to file a lawsuit to get one such list. Taras Kremin is also acting as co-author of the draft law which will bring freedom of panorama to Ukraine when passed.
The Wikipedia Education Program in Ukraine is mainly about replacing ordinary student papers with Wikipedia articles. Such papers have the same topic year after year. So even if writing them is useful somehow for a student, it is certainly not useful for the educators or the public. On the other hand, Wikipedia articles need be created only once, but can be read by anyone on the web and are improved constantly by other editors. Educators in the Vasyl Sukhomlynskyi National University of Mykolaiv understand this and other advantages of working with Wikipedia, and they expressed their willingness to continue working with this new education model. On December 14th, representatives of Wikimedia Ukraine and the Vasyl Sukhomlynskyi National University of Mykolaiv signed the memorandum of cooperation.
The first event within this collaboration will be a training for tutors planned for February 2016. The organization of this training was discussed with Vasyl Shuliar, Director of the Mykolaiv Oblast institute of post-graduate education for teachers. The Wikipedia Education Program cannot be realized without teachers getting involved in editing Wikipedia, and Wikimedia Ukraine plans to provide as much training events as possible.

Wikimedia Ukraine would be happy to see a rich collaboration with this region, and a lot of already ongoing projects and ideas can be implemented here. We plan to work with Wikipedia Education Program, organize regional events for Wikipedians from all over the southern part of Ukraine etc. Placing QR-codes on the monuments of the city will mean motivation for writing articles about them in Ukrainian, English, and other languages. Mykolaiv Oblast is an attractive territory for tourists. There are many places worth covering by Wiki Loves Earth and Wiki Loves Monuments photo contests, and we plan to initiate some preparatory work and engage students of photo schools. GLAM can be raised to a new level in the wonderful museums of Mykolayiv and the surrounding region, like the Mykolayiv Regional Museum of Local History , The Museum of Shipbuilding and Fleet, and others. We also considering holding Summer Wikischool for high school students, similar to Wikicamp in Armenia. Wikipedia belongs in education and now it is in Mykolaiv Oblast.
Vira Motorko, Wikimedia Ukraine 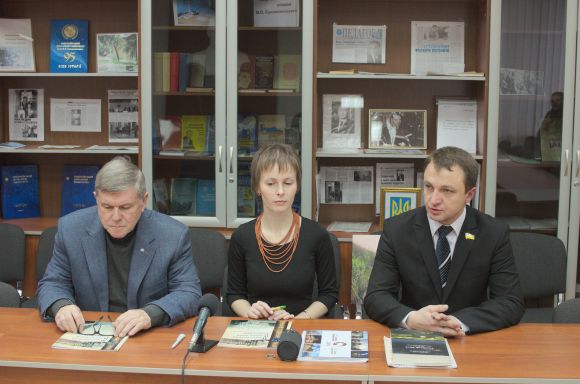 Wikimania: The 2017 edition of the annual conference for the Wikimedia community will be held in Montreal, according to an official announcement on Wikimedia-l. Unusually, this decision was presaged by a leak on the same mailing list in October and a subsequent Signpost article. Meanwhile, there is a major consultation on Meta about the future of Wikimania and what form it will take.
Sources, data, and Wikipedia: All three were subjects in a recent Argentine hackathon that targeted teachers. The event was a collaboration between four organizations and boasted 70 people in attendance. Read and see more on Wikimedia Argentina’s blog and on Storify.
Drone photography: An op-ed from a German Wikipedian ran in this week’s Signpost. Of note: “… drone photography offers great possibilities for Commons photographers. Aerial views allow readers to better understand the location and setting of a monument or a place described in an article. And, you can add a whole new dimension with aerial video, to give readers the whole picture.” We ran a profile of another drone photographer in September.
Week of Arts: Wikimedia Argentina and Chile collaborated at the University of Cuyo in Mendoza, Argentina to show the Aart productions done by students, teachers and graduates of the faculty and share them with the educational community. Both the Chilean and Argentine chapters were invited as partners to organize activities together under the topic of the relations between Chile and Argentina; the visit was coordinated by the Department of Learning Technologies and Communication (TAC). The meeting aimed to sensitize the educational community regarding Wikipedia as an educational tool and how the dissemination of knowledge built collaboratively; it marks a paradigm that shifts the educational paradigm, opening new challenges to face. We also built up our capacity of teaching Wikipedia to people in the trasandine culture.
Ed Erhart, Editorial Associate, Wikimedia Foundation