Refugees resting on a bridge between Germany and Austria. Photo by Christian Michelides, freely licensed under CC BY-SA 4.0. 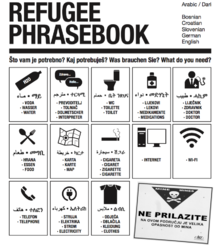 This is a guest post from the team behind Refugee Phrasebook.

With the ongoing humanitarian crisis in the Middle East and in Europe, where over a million refugees have and are seeking safe haven in Europe, the need for better communication with and for refugees has become urgent. These refugees are coming into countries like Turkey, Greece, Italy, Slovakia, or Germany with little to no knowledge of the Turkish, Greek, Italian, Slovak, or German languages.
In response, an international group of volunteers started the Refugee Phrasebook in August to collect and translate useful phrases for refugees in more than 30 languages.
The phrasebook catalogs a general set of phrases as well as sentences for juridical and medical needs, from the simple “hello” or “water” to more complex requests like “I need to see a doctor.” Requests for more phrases have tripled the total length of the tables in the last four months.
All of this has been collected into a single Google Doc, which we have licensed under CC-0—also known as the public domain. Anyone can take the work and reuse or remix it for any purpose, including refugee aid projects all over the world, without fear of copyright infringement.
However, many of the refugees have little access to the Internet or mobile phones, so we have had to print several booklets. Supported by Wikimedia Deutschland, we organized a Wikibooks workshop and printed 10,000 of them in Thessaloniki, Greece, each containing 20 to 40 pages. Local volunteers and OKF Greece helped with distributing them to the Aegean Greek islands, where many of the refugees have ended up.
Meanwhile, Hungarian advertising agency Bisnode used the phrasebook data to create a custom version of their own, eventually printing 100,000 to be distributed at the borders (40,000 in Germany). A Croatian-Slovenian Wikibooks version was promoted on the websites of radio stations and printed by local volunteers on demand, and local versions have been designed at several locations, including a phrasebook made by the Muthesius Kunsthochschule Kiel.
Several mobile apps have been designed as well, for use when refugees have access to the Internet. Refugee Phrasebook interactive provides data from the tables in a more user-friendly interface, while RefuChat supports refugees, helpers and paramedics with custom sets of phrases. The app InfoAid not only includes the language data, but also helps distribute important information and updates. The web app refugee-phrasebook.github.io presents the data in an accessible format with selectable sets of languages, while other projects are being developed on GitHub.
Where do we go from here? The printing and distribution project is now in its fifth month, and the demand for phrasebooks is still very high. Translations in several languages still have to be completed and checked, a common issue in our feedback is the lack of an Arabic pronunciation guide for non-Arabic languages, which could make it easier for non-native speakers to pronounce words in the languages of their destination countries.
Most of all, we need dedicated workshops with refugee committees to identify the most useful phrases to recommend for printing. Since the language data has been corrected and extended since the first print runs, all existing apps as well as Wikibooks and custom design versions have to be updated. There is a lot to do.

Together with Open Knowledge Foundation Deutschland e. V. (OKFDE), Refugee Phrasebook maintains the website refu­geephrase­book.de, a Wikibooks page, social media accounts (Facebook/ Twitter) and a bank account for donations to support the distribution of printed versions (to ensure transparency, all funding is accounted and reported by the OKFDE; at the end of each year, the unused funds are donated to Doctors without Borders). As this is an open data project, local groups are encouraged to coordinate their own version with refugee initiatives; we try to help organize funding or match volunteers with potential donors.
Markus Neuschäfer, Refugee Phrasebook