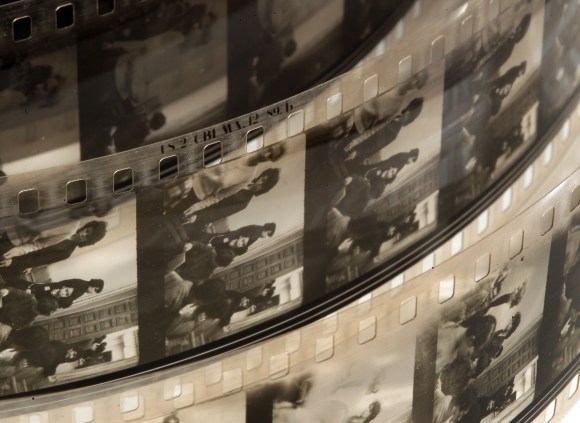 Were you one of the people contributing a pageview to these articles? Photo by Runner1616, freely licensed under CC BY-SA 3.0.
2015 was the year of the movie on the English-language Wikipedia, with nine film-related articles in the top 25—and one climbing all the way up to #3 in the last two months of the year.
In contrast, only seven film articles appeared in the top 25 in 2013 and 2014 combined.
Early on January 6, pageview data for the English-language Wikipedia’s most popular articles of 2015 came in. Film led any other category by large margins: Star Wars: The Force Awakens came in at #3 with 23.5 million views, followed by Avengers: Age of Ultron at #9 with 17.4 million hits.
Force Awakens was a popular article throughout the year, but interest in the topic skyrocketed around the movie’s December release. As a topic, Star Wars actually took 11 of the top 25 slots in the week before its release and 10 of 25 in the week after; the article on the overall franchise was #13.
Other 2015 movies slotting in the top 25 were Furious 7 (#15), Jurassic World (#16), and Fifty Shades of Grey (#18)—something that likely come as little surprise to avid film fans, as Jurassic, Star Wars, Avengers, and Furious are, respectively and as of publishing time, numbers three through seven on Wikipedia’s list of highest-grossing films of all time. While Fifty Shades of Grey (film) actually received 7,073,570 views, it appears that an even greater number of people either accidentally navigated to or wanted to read about the book.
The annual list of Bollywood films, a perennial favorite, hit #7, and two individuals important in film made the list as well. Chris Kyle’s biographical film American Sniper was released in the United States at the tail end of 2014, and the resulting controversy clearly carried over into 2015; Kyle’s article was viewed nearly 27.8 million times. Paul Walker (#24) died in a car crash during during the filming of Furious 7.
Television only factored with Game of Thrones (#12) and the drug cartel kingpin Pablo Escobar (#19), who was depicted in Netflix’s Narcos and was the most popular article on the English Wikipedia for five of six weeks in September.
These stats are very different from the two other full years of pageview data we have. In 2013, the top 25 had seven TV series: Breaking Bad, Walking Dead, Game of Thrones, Big Bang Theory, Arrow, How I Met Your Mother, and Doctor Who. By 2014, this dropped to four shows: two different Games of Thrones articles, Walking Dead, True Detective, and Agents of SHIELD.
In neither year did any film, aside from the annual lists of film and Bollywood films, feature in the top 25.
Are we seeing a shift back to film? Is the so-called “golden age” of 2000s TV coming to an end? Has Hollywood perfected the art of a hit franchise film? Is this an anomaly year with an unusual number of attention-grabbing blockbusters? Is this an artifact of the data that we’re overinterpreting?[1] Only time will tell.
Oddities of interest include the first-place deaths in 2015, an article that was also the most-edited article of the year by a large margin with nearly 27.9 million views[2]—but few no individual deaths feature in the list, Chris Kyle notwithstanding. Stephen Hawking, a famous theoretical theorist, landed at #6 for 2015 thanks in large part to an extraordinary 19-week run in the weekly top 25 after the release of The Theory of Everything in 2014.
Perhaps most notable is the decidedly lacking number of current news events. The two terror attacks in Paris, for instance, were two of the most-edited articles on the English Wikipedia in 2015, they were only #533 and 680 on the raw list. Aside from ISIS, the terror group fighting for control of a swath of territory in the Middle East, the only examples come from celebrities. Donald Trump slotted in at #17: the outspoken real estate mogul and Republican candidate for President of the United States has been in the US news on an almost constant basis since he declared his intention to run for president in June. Kanye West came in at #11, although over one-third of his 16.5 million hits came in a two-week span after “loser.com” began redirecting to his Wikipedia article.

This data was collected and collated by researcher Andrew West, a Senior Research Scientist at Verisign Labs. You can read through weekly lists with insightful and occasionally witty commentary from Milowent and Serendipodous in the Signpost or Wikipedia’s Top 25 Report. For films specifically, Wikipedia statistics are a prime component of Variety‘s Digital Audience Ratings. For interested coders, a new pageview API is available.
On a methodological note, these entries have been screened for for spam and botnets. The raw data has been published on Wikipedia, where you will see that there are many articles with below 2% or above 95% mobile views, an almost certain indicator of false popularity. Without this check, articles like the small German town of Angelsberg—with 78.1 million views, all (100.0%) from mobile—would be featured even though readers aren’t actually looking for them.
Ed Erhart, Editorial Associate
Wikimedia Foundation

[1] One point in favor of this interpretation is that pageview numbers across years are not directly comparable, as our data prior to October 2014 did not include mobile readers. We assume here that even though the 2013–14 counts are not complete snapshots, the overall order would not significantly change.
[2] Wikipedians chronicle the deaths by month, so the page now redirects to a so-called “list of lists of deaths.”