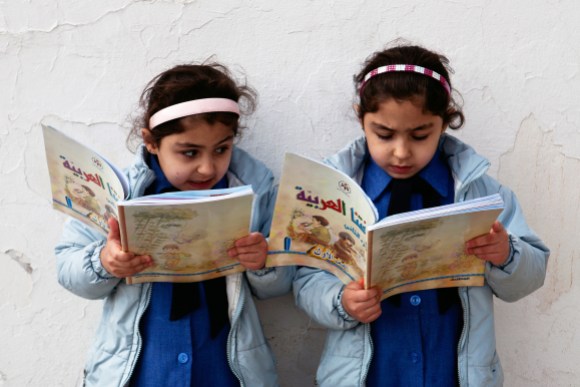 As Wikipedia marks its 15th anniversary, its community is celebrating with nearly 150 events on six continents. Meanwhile, the Wikimedia Foundation is announcing an endowment to sustain Wikipedia for the future. Photo by Tanya Habjouqa, freely licensed under CC BY-SA 3.0 IGO.
This Friday marks the 15th anniversary of Wikipedia, the world’s free encyclopedia that anyone can edit. This week, we celebrate not just Wikipedia, but the birth of an idea: that anyone can contribute to the world’s knowledge. Globally, readers and editors are coming together to celebrate, with nearly 150 events across six continents. From editing marathons in Bangladesh and lectures in Switzerland, to picnics in South Africa and a conference in Mexico, the world is celebrating the joy of knowledge.
As part of this milestone, the Wikimedia Foundation is pleased to announce the Wikimedia Endowment, a permanent source of funding to ensure Wikipedia thrives for generations to come. The Wikimedia Endowment will empower people around the world to create and contribute free knowledge, and share that knowledge with every single human being. Our goal is to raise $100 million over the next 10 years. The Endowment has been established, with an initial contribution by the Wikimedia Foundation, as a Collective Action Fund at the Tides Foundation.
Wikipedia launched on January 15, 2001 with a bold vision: a world in which every single human being can freely share in the sum of all knowledge. At the time, the idea that people around the world would collaborate to build an encyclopedia—for free—seemed unbelievable. Since then, Wikipedia has grown to more than 36 million articles in hundreds of languages, used by hundreds of millions of people all over the world. Wikipedia and its sister projects are still built by volunteers around the world: each month, roughly 80,000 volunteer editors contribute to Wikimedia sites.
“Wikipedia challenged us to rethink how knowledge can be gathered and shared.” said Wikipedia founder Jimmy Wales, “Knowledge is no longer handed down from on high, instead it is freely shared by everyone online. Wikipedia seemed like an impossible idea at the time—an online encyclopaedia that everyone can edit. However, it has surpassed everyone’s expectations over the past 15 years, thanks to the hundreds of thousands of volunteers around the world who have made Wikipedia possible.”
We’re celebrating Wikipedia’s global community with a commemorative website and week-long campaign, collecting and sharing the stories of individuals and organizations that have helped develop Wikipedia into the world’s largest collection of collaboratively created free knowledge. These stories show the truly global nature of the Wikimedia community: from Ziyad Alsufyani, a medical student at Taif University in Ta’if, Saudi Arabia who has been editing the Arabic Wikipedia since 2009, to Susanna Mkrtchyan, a professor and devoted grandmother working to give Armenian students better educational opportunities. We will continue to collect stories throughout the month of January.
Today, we celebrate all of the projects, partnerships, events, and joy the Wikimedia movement has inspired over the past 15 years, with many still to come. Wikipedia is much more than a website. Wikipedia and its sister Wikimedia projects represent a global, ever-expanding resource and community for free knowledge. Here are just a few examples:

If you’d like to help celebrate Wikipedia’s 15th anniversary, you can share on social media what Wikipedia means to you by tagging @Wikipedia and using the hashtag #wikipedia15. To learn more about Wikipedia and the joy it inspires, visit 15.wikipedia.org.
Katherine Maher, Chief Communications Officer
Wikimedia Foundation

About the Wikimedia Endowment