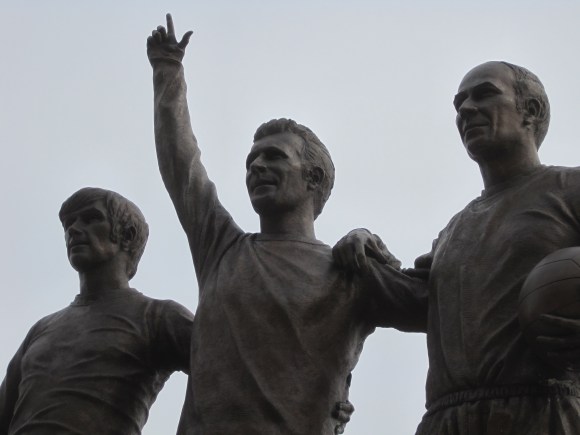 Denis Law, centre, is scientifically the most famous person from my home town. Who’s yours? Photo by apasciuto, freely licensed under CC BY 2.0.
Who is, scientifically, the most famous person in your home town? A new research project might be able to tell you.
Pantheon, a project developed by the Macro Connections group at the MIT Media Lab, is collecting data from thousands of Wikipedia biographies across 25 language editions, then using that data to visualise historical significance.
With the dataset (and its data visualisation kit), it’s possible to create a treemap of the occupations of a certain region’s famous people across history. You can also use it to find out the most famous people in a certain city—in my home town of Aberdeen, Scotland, that honour belongs to Manchester United footballer, and one-third of the “United Trinity“, Denis Law.
The tool uses a metric the team call “Historical Popularity Index”, gained through a variety of methods laid out on the tool’s methods page. One of these is the number of Wikipedia language editions which contain the person’s biography—for example, Jesus Christ is featured in 214 Wikipedias.
César Hidalgo, director of the MIT Media Lab’s Macro Connections group, where he uses Wikipedia data together with Amy Yu, Cristian Jara, and Shahar Ronen, says the project studies “collective memory”. During a previous project, in which he worked on mapping cities and countries’ industrial output, he realised that he was missing a significant part of national exports: “The US exports soybeans and jet engines, but it is also the birthplace of Miles Davis and Malcolm X. That should count for something, but our records of international trade do not gather information on cultural exports.
“I decided to start a project to map globally famous biographies as a mean to map [these] cultural exports,” he says. “By now our thinking has evolved, and we think of this dataset as a biographical view of human collective memory. But the origins came from the cultural exports framing.”
Right now, the dataset is limited to just over 11,000 individuals, thanks in part to manual verification and data cleaning. The team of researchers behind the project say this incompleteness is unavoidable, but that it’s also a motivation for them to continue to improve the service.
To find the most popular person on Wikipedia from your home town, head over to Pantheon’s site and find the right city.
Joe Sutherland, Communications intern
Wikimedia Foundation