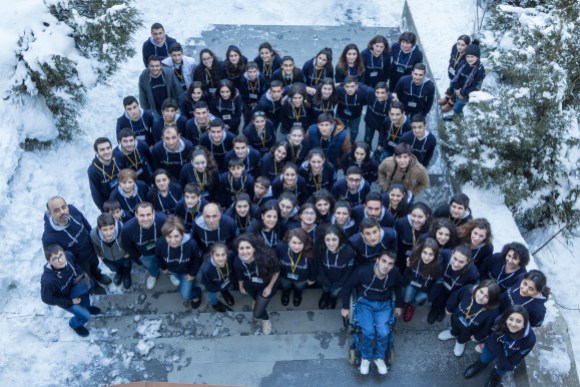 Group photo of the participants in Winter WikiCamp 2016, the latest edition of this program. Photo by Beko, freely licensed under CC-BY-SA 4.0.
WikiCamp is an education program that aims to get young students editing Armenian-language content on Wikimedia sites. National identity, recreation and knowledge are at the core of this program, as participant Shahen Araboghlian states: “WikiCamp is a new experience, a chance to meet other people, self-develop and enrich Western Armenian language in the Internet”.
This exciting initiative, which aims to get young Armenian Education Program participants aged 14 to 20 to edit the Armenian Wikipedia, has been around since July 2014—since which there have been five WikiCamps. The return from the camps is surprisingly high, and they are well known in Armenia—having been covered by Aravot and News.am in January 2015, along with several others.
The camp has also increased in popularity among students, increasing the number of participants from 59 in the first camp to 76 in the second edition, and growing. Participants are not only happy to join WikiCamp and make new friends, but also, to contribute to expand open knowledge in their own language. “Honestly, I never edit Wikipedia to have high points and to come to Wikicamp. I edit to make articles available in Armenian, for people who share the same interests as me. This is what motivates me when I edit”, says participant Arthur Mirzoyan.
Since Winter WikiCamp 2015, however, we have made this activity available to even younger editors in this education project with a new, much easier wiki activity: Wiktionary editing. 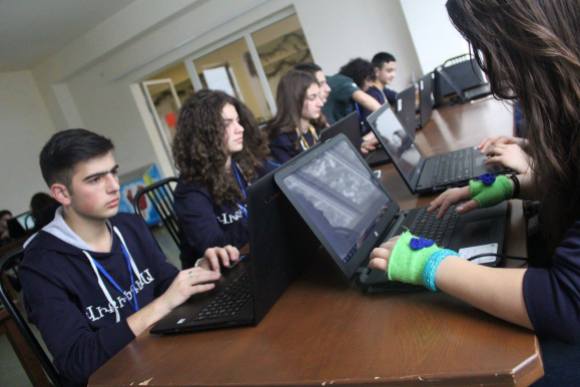 Participants editing in one of the camp workshops. Photo by David Saroyan, freely licensed under CC-BY-SA 4.0.

Before Winter WikiCamp 2015, Armenian Wikipedia Education program focused only on Wikipedia. As the Wikipedia Education program rapidly spread in different regions of Armenia and became popular, many secondary school students expressed their wish to join the program—but not all of these students could easily learn Wikipedia editing techniques or were able to write and improve articles that met the project’s guidelines, like writing in encyclopedic style or having reliable sources.
As their wish to edit Wikipedia and its sister projects was enormous, we decided to involve these students in editing Wiktionary. Editing Wiktionary doesn’t have the same requirements as writing an encyclopedic article; the editors just fill the necessary fields using the provided dictionaries. Helpful guides, word lists, dictionary links made the editing process much easier for secondary school students. As the Armenian Wiktionary did not have active users, we created Wiktionary tutorials for them. We also found different free dictionaries and digitized them, created word lists and provided these to the students, all of which gave us a foundation to begin enriching Armenian Wiktionary with words.
The process was simple: we asked students to write the word’s definition, examples of usage, etymology, expressions, synonyms, derived forms and translations. Before we started with the Education program, there was a major gap in Armenian-language content and no complete free dictionary. This gap inspired us and was the main reason why we focused solely on Armenian content. At that time, we had only 3,000 Armenian words which needed to be improved, and during the Winter WikiCamp 2015 a portion of those words were enriched. The improvement process continued successfully after the camp ended, transforming our education initiative into a well-known Wiktionary-based program for secondary school students.

Where do we go from here?

As a result of Wikimedia Armenia’s Education Program and its participants’ efforts, this year the Armenian Wiktionary reached 100,000 entries.
After this success, we decided to include Wiktionary editing in the next WikiCamp: in Summer 2015, Wiktionary editors were actively involved in the camp and around 14,000 entries were created with joint efforts. Our main breakthrough was realizing that other Wikimedia projects could be as effective education tools as Wikipedia, so we attempted to implement other iterations in WikiCamp. Wikisource and Wikimedia Commons are still in development stage. You can find this and other outcomes in WikiCamp project page on Armenian Wikipedia.
David Saroyan, Program Manager, Wikimedia Armenia
Lilit Tarkhanyan, Wikipedia Education Program leader, Wikimedia Armenia
María Cruz, Communications and Outreach, Learning and Evaluation team, Wikimedia Foundation
Samir Elsharbaty, Fellow, Wikipedia Education Program, Wikimedia Foundation
«What I Learned» is a blog series that seeks to capture and share lessons learned in different Wikimedia communities over the world. This knowledge stems from the practice of Wikimedia programs, a series of programmatic activities that have a shared, global component, and a singular, local aspect. Every month, we will share a new story for shared learning from a different community. If you want to feature a lesson you learned, reach out!