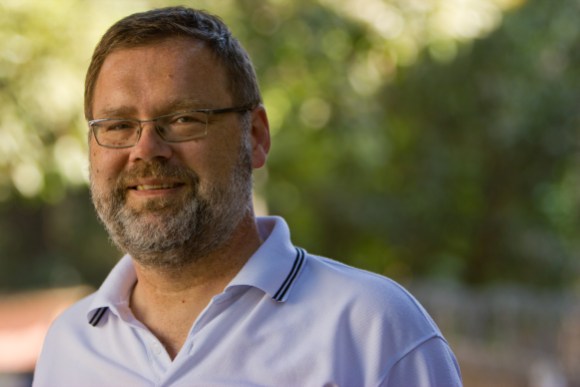 Meijessen, seen here in 2011. Photo by Victor Grigas, freely licensed under CC BY-SA 3.0.
Gerard Meijssen is a high-volume contributor to Wikidata and frequently comments on the state of the Wikimedia movement through his personal blog and posts to Wikimedia-l, the community’s mailing list. Here, fellow community member Syed Muzammiluddin interviews him about the Wikimedia movement and his contributions to it. As always, comments and critical commentary are invited in our comments section at the bottom.
You’ve played a significant role on Wikimedia projects, including the Language committee, OmegaWiki, ICANNWiki, and more. How do you describe your contributions in your own words?

The one thing why my contributions matter is that I believe very much that the only way to be credible is by being involved and making a difference by leading by example. To me Wiktionary proved to be horribly broken and it is why I tried the OmegaWiki approach.

Given that Wikipedia is not English only, it makes sense to have other languages and at the time it was likely that no more new languages would be possible. This is why the Language Committee started. When you want to make a difference, it is not about what is wrong, it is more about how it can be improved, how to make it right.

Going by your contributions, your preferred project appears to Wikidata. Why is that?

Wikidata has many similarities with OmegaWiki. It has the benefit of being supported by the WMF and it makes a difference because it makes data accessible in any language. To me this makes a crucial difference. Every language is eligible as long as it is recognised in ISO-639-3. Wikidata was relevant from the start because it is such a big improvement for Wikipedia.

What especially motivates you to be a zealous contributor on this project, with over two million edits?

What special areas have you contributed to on Wikidata?

I have been particularly involved in people who recently died. For them I have been adding information that connects them with others. Things like the school they went to, the club they played for and the award they received. At this time I am particularly interested in awards because it connects “the best and brightest”.

You’ve remarked that “Wikidata is a tool, it is a mechanism that allows us to make a difference. Only storing data is so little of what we can do.” Can you elaborate on your “difference” statement?

Adding data to Wikidata is important, it is one way of improving quality. There are however issues with some of the data we hold. When we have a clue where we have issues, it makes a real difference when we point people to them. It is how their effort gains value. We should concentrate on where we have the most effect.

What according to you is the most significant aspect of Wikidata which is often not recognized?

The most important aspect of Wikidata is its quality. Many people approach it on the basis of single items and are easily disappointed. There has never been research to determine relative quality for our data. The main point to do this would be to determine where we can do better. Whatever the number, people will complain because they do not understand what Wikidata stands for and the many ways you can experience quality.

What are the most interesting areas of Wikidata according to your experience?

Wikidata is too big to really appreciate everything that is going on. I love what Jane and Maarten are doing for GLAM’s and art. I am really curious about what is done about genes and proteins. My interest is mostly in people and what I find is how much the “third world” is lacking in attention. I find that there are some things that I can do but it is only scratching the surface. Given the overwhelming amount of data on the “global north” it hardly registers.

What special approaches do you suggest to create awareness and a high level of enthusiasm about Wikidata?

There are lists that can be automatically updated on a Wikipedia using the Listeria bot. When you have the same list on multiple Wikipedias for instance about an award, all the list will be updated when Wikidata is updated.

In one of my earlier interviews, it was suggested that training and workshops are needed for Wikidata. How important do you feel is the training and orientation here?

When you start from scratch and when you are not fluent in English, it makes a real difference when you first get a good introduction followed by hands on experience together. Once multiple people “get” Wikidata they cab support each other and together they will raise the relevance of their culture and language a lot.

As a sysop on the Urdu Wikipedia, I noticed that clicking “Edit links” often opens the page for creating new Wikidata item. Users innocently create a new secondary item and this become s a mess. How do we deal with such situations?

The first thing is to keep calm. Things happen. You can check if an item already exists in another language and just add it to the existing item. Alternatively when you find that two items exist for one subject, it is easy enough to merge them. There is a gadget that makes it easy.

When you add labels to items in Wikidata, you will find them in your Wikipedia when you enable Wikidata Search like it is done in the Tamil Wikipedia. Try searching for for instance for any article that exists in the Urdu Wikipedia and, you will find it anyway.

VIAF is a system of the international library organisation. By moving to Wikidata any language is now represented with equal relevance. So it is a very welcome move as it removes the existing English bias and brings in all the other languages from the cold.

Do you suggest some changes in the present structure of Wikidata?

If there are two things I would suggest, The first would be to have Reasonator implemented natively for Wikidata; it would give meaning to the data that is available. The second is that I would spend a lot more effort on comparing sources and in an iterative way ensure that the quality of Wikidata improves.

Do you believe Wikidata can check self-promotional efforts of individuals through different versions of Wikipedia?

This is a non issue for me. The only way any person becomes more relevant is by ensuring that he or she is well connected to other items. In the process all the others become more relevant as well and when the data provided is wrong, it becomes easier to find fault and remove any nonsense. Knowing objective facts is worthwhile in its own right. When a subject is hardly relevant, knowing the facts about it do not hurt.

How do you leverage your association with Wikidata vis-à-vis other Wikimedia projects?

I have been involved in so many projects that I do not care too much about the distinctions between projects. There is only one “sum of all knowledge” and this is not specific to any one project. With Wikidata we are able to serve the sum of all available knowledge and it provides the glue between the many projects that make up everything that is the Wikimedia Foundation.

How do you foresee the future of Wikidata?

Wikidata increasingly connects many sources. My expectation is that people will build applications that rely on data that is available never mind where it is. These applications will estimate how likely information is relevant and correct. One easy example is suggesting to load a book from the library and enable you to reserve it at YOUR local library. Alternatively they will provide you a book from Wikisource.