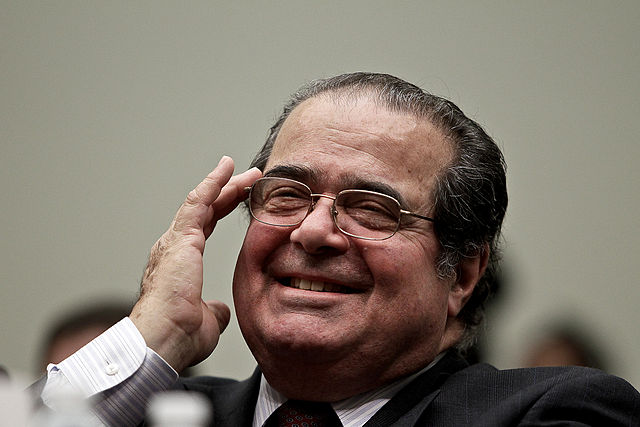 Justice Scalia, known for his originalist stance in the Supreme Court, was found dead on Saturday. Photo by Stephen Masker, freely licensed under CC BY 2.0.
For nearly thirty years, he was one of the most-recognized and influential members of the United States’ highest court.
Antonin Scalia, who died on the weekend while at a West Texan ranch resort, was a Justice on the Supreme Court of the United States—which holds supreme jurisdiction over all other courts in the country—for nearly thirty years following his appointment by Ronald Reagan in 1986.
We spoke to Wikipedia editor Gary Greenbaum, a lawyer in Virginia who is better known on the site by his username “Wehwalt.” He wrote the article on Antonin Scalia and got it up to “featured” status—an indication of its quality.
Though Greenbaum didn’t agree with everything Scalia said, he does say he admired the justice’s delivery.
“In [Scalia’s] years on the bench, no one was under as bright a spotlight as Scalia, and in part he shone it on himself,” Greenbaum says. “He will be long remembered for giving constitutional originalism powerful support and for making it sexy.”
Scalia was a staunch believer of textualism and originalism—the view that a law’s original wording should be followed to the letter—and during his time as a justice, espoused a consistently conservative stance both in voting and in ideology.
His death means the outgoing Barack Obama has the opportunity to nominate a new justice before the next president is elected—something now influencing the race for the presidential nominations on both sides.
Being featured, Scalia’s Wikipedia article has been peer-reviewed by other editors, and has been found to meet several strict criteria marking it as one of Wikipedia’s highest-quality articles. It was promoted in 2010 following around two weeks of discussion and tweaking, during which Greenbaum polished it to meet reviewers’ demands. 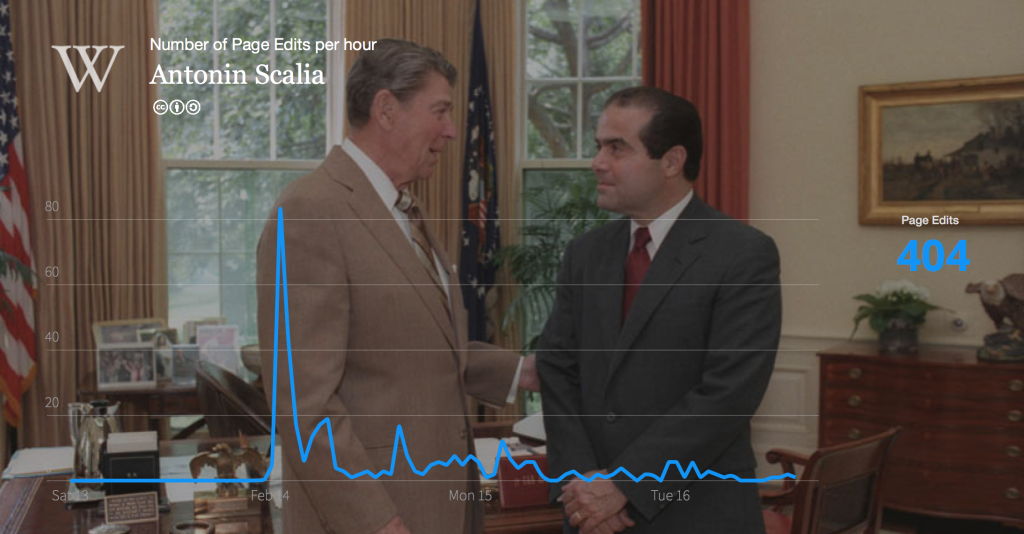 Since its creation in 2003, Scalia’s article has attracted some 3,500 edits. More than 400 of them came after the announcement of his death on Saturday. Photo by Bill Fitz-Patrick, public domain.
“I was inspired to improve his Wikipedia article by reading a biography of him, and having long admired his dissents, which were blunt, often funny, and never minced words,” he says. “I attended a talk he gave at my law school, George Washington, in the late 80s. The place was packed, but I found a perch on a garbage can. All I remember of what he said is the constitution which was stuffed with the greatest guarantee of rights was the Soviet one.”
Wikipedia’s article on Scalia was updated as news of his death broke. An anonymous editor was the first to edit the article to reflect the death, with an interesting choice of edit summary. In part due to the high quality and importance of the article, the update took some time to mix into the prose; Wikipedia works on verifiability, so editors waited for respected publication to report on the death.
“I quickly realized that [Scalia’s death] would put a whole new intensity into this year’s election, but more immediate need was trying to keep the article from going out of control,” Greenbaum recalls. “There are times when the public truly takes over a Wikipedia article, and this is one of those times.
“Think of it as a huge heavy object sliding across ice. You don’t want to get in front of it because you’ll wind up underneath, but by pushing and hitting it at an angle, you can sometimes keep the article from exploding.”
Readers certainly did flock to Scalia and other related articles in the wake of his death. Pageviews on his article jumped by 33,710% and 49,730%—or in actual terms, from about 1,876 per day to over 634,269 and 934,798 on February 13 and 14, respectively. You can see and play with this (and related) data yourself on Wikimedia Labs.
With Scalia’s death, it is widely commented that Obama, as a fairly liberal President, would likely nominate a liberal-minded justice to fill Scalia’s conservative seat. The Republicans, however, have threatened to block Obama’s nomination, arguing that Obama’s selection would not represent the wishes of voters (and that, instead, that of his successor, to be elected in November, would). The Republicans run the Senate, making Obama’s job harder still.
The American press has already identified several potential candidates for the role, all of which you can read about on Wikipedia. The highest-profile include Sri Srinivasan, Merrick Garland, and Paul Watford. 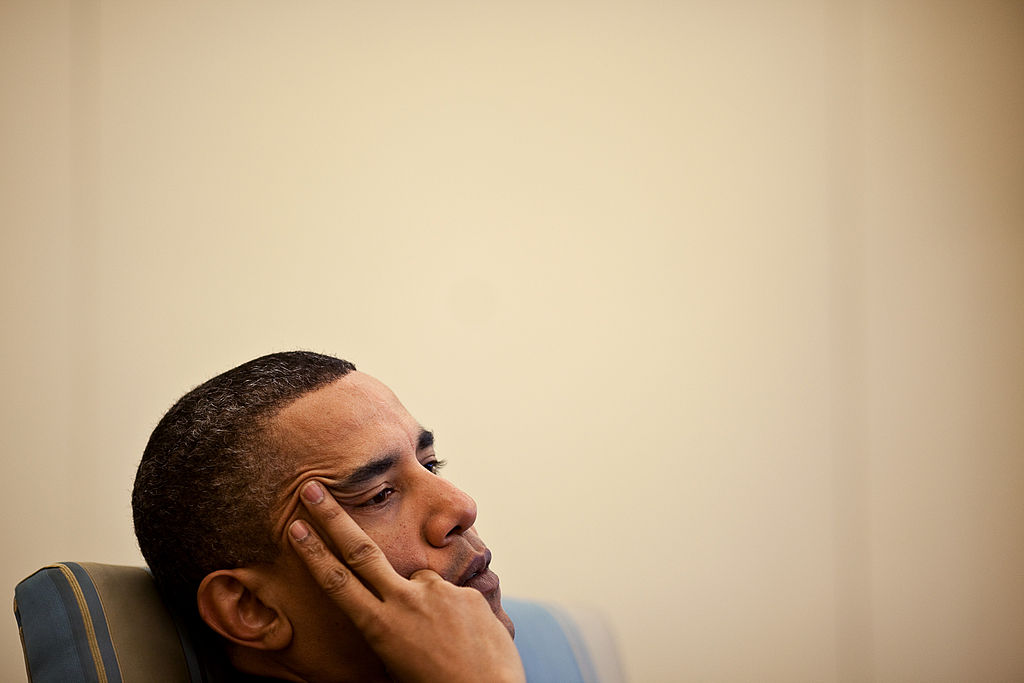 Barack Obama has a lot of thinking to do to fill this vacant seat. Photo by The White House, public domain.
Greenbaum suggests that, whomever he opts for, Obama will likely get his way based on the history of these situations. “The stakes are very high, and [the Senate] might prefer just refusing to confirm and hoping for the next president,” he explains. “I don’t see Obama compromising though, he doesn’t in this sort of thing. Whoever it is, it will be uncomfortable for the Republicans to refuse.
“The record of the nominee will be gone over in very close detail and the nomination will be tried in the public eye before ever the Senate weighs in.” Indeed, the Senate’s Committee on the Judiciary, which debates the president’s nominated candidate, holds its hearings on television as of 1987.
“Basically it will be a war of public relations,” he adds.
The situation is complex, but throws another issue into what has already proven a quite remarkable presidential race. Candidates not given much chance only months ago are giving once runaway favorites a run for their money.
“In my younger days, I enjoyed political novels such as those of Allen Drury,” Greenbaum says. “But he would have strained to imagine someone like Justice Scalia, and strained even more to invent a situation like this. But we are living it, and there is no way to flip to the end early.”
Joe Sutherland, Communications intern
Wikimedia Foundation