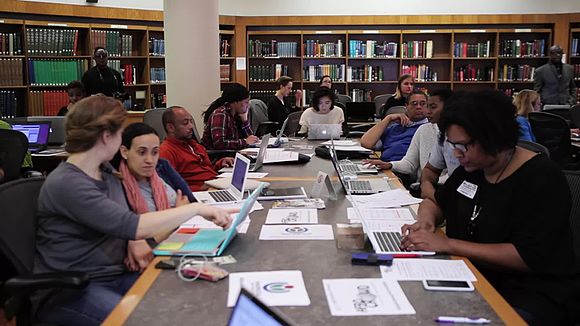 Dozens of black history articles were created or improved at the #AfroCROWD Wikipedia editathon in Harlem. You can watch the video here, on Youtube, or Vimeo. Video by Victor Grigas, freely licensed under CC BY-SA 3.0.

In 1869, an African-American named Edward Augustine Savoy was hired by the US Department of State as a messenger. 63 years later, he retired with the highest rank available to men of his race at that time. Savoy did not have a Wikipedia article until an editor created it at an edit-a-thon in Harlem, New York City early this month aimed at filling some gaps in Wikipedia’s black history articles.
Held at the Schomburg Center for Research in Black Culture , the edit-a-thon aimed to build on last year’s Black Life Matters edit-a-thon plus this year’s national Black WikiHistory Month outreach campaign and Women in Red events. Several more events will be held in New York in the next months: Black Life Matters at the Longwood Art Gallery on February 27, Art and Feminism at the Museum of Modern Art and Interference Archive in early March, and Middle Eastern/North Africa art at the Guggenheim on April 30.
Alice Backer, the founder of AfroCROWD, told us that “The significance of AfroCROWD’s partnership with the Schomburg can’t be understated. It is a central hub for scholars the world over seeking to learn about black history and culture. It is also an integral part of New York’s Afro-Descendant community. The Black Life Matters edit-a-thon attracted over 60 new and growing Wikipedians, press, and with the help of volunteers from the Wikimedia New York community, new Wikipedia articles on topics that are important to the community.”
“As these contributions continue to grow and develop, they will add to our greater collective knowledge and understanding.”
Video by Victor Grigas, Storyteller
Post by Ed Erhart, Editorial Associate
Wikimedia Foundation