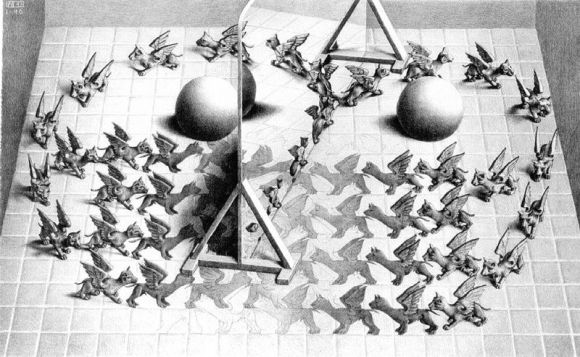 Magic Mirror, by M.C. Escher, used in low-resolution to illustrate the article about the lithograph and here as an example of fair use on Wikipedia. Print copyrighted by the M.C. Escher Company B.V.
Wikipedia is written by a global community of volunteers who create, share, and remix free knowledge. However, you may be surprised to learn that many articles contain content that is not freely licensed, but available to use thanks to a US copyright doctrine called “fair use.” On Wikipedias that allow fair use, the policies allowing it turn out to have grown up organically from a few examples along with discussions on the Internet way back in 2003. But Wikipedia’s rules for non-free content have since become some of the bedrock principles helping the editing communities decide what sorts of things are okay to put on Wikipedia in order to comply with copyright law.

The legal fair use doctrine (for example, see the infographic on the fair use week website) looks at four factors: 1) the purpose and character of the use, 2) the type of work, 3) the amount of the work used, and 4) the effect of the use on the potential market for the original.
English Wikipedia’s non-free content rules, however, dig quite a bit deeper than that. Apart from requiring content usage to comply with fair use, Wikipedia also asks people to see if they can find any free alternative and asks that anyone adding non-free content provide a rationale for why it’s necessary for an article.
Just illustrating something isn’t enough—the policy asks that the uploader either need to show the non-free content because the work itself is the subject of an article or because it shows some specific and important style or behavior about the article subject that couldn’t be understood without the non-free work. There are also a number of technical limitations such as making sure the image is low resolution and properly tagged so that others seeing it don’t get confused about whether they can reuse it.

So how did we get here?

The English Wikipedia non-free content policy started out simply as a request for information about fair use back in 2003. Perhaps “non-free content” was a catchy page title, but within a year, the page was used as a place to ask about files. The original request was for a photo of Dolly, the cloned sheep, which was removed from Wikipedia as not being an appropriate fair use a year later.
By 2005, the page had become both general guidance for how to do fair use images on Wikipedia and a rationale for it. By 2006, it was labeled as a guideline and there was some dispute about whether it ought to be a policy or a guideline (the distinction being that policies are required to be followed whereas guidelines are best practice that can occasionally be ignored in the name of common sense). The page has lived on ever since, with nearly constant edits updating it for formatting, adding details or extra explanation, and making small tweaks.

Why did it grow up this way?

Wikipedia’s non-free content guidelines developed from more than a desire for legal compliance with the fair use doctrine (though both the Wikimedia Foundation and the volunteer editors take legal compliance very seriously). Rather, the editors developed the guideline to uphold the values of the free knowledge movement. This guideline is named the “non-free content policy” because outside of it, everything on English Wikipedia is licensed for free reuse for any reason, even for people wanting to make a profit, as long as they give proper attribution under the CC license (typically BY-SA 3.0) and license their derivative works under the same terms.
Wikimedians are often averse to hosting content that would be only under a non-commercial license or a limited fair use because it makes it harder for the public to take advantage of the knowledge on Wikipedia. And many people feel that the commercial/non-commercial distinction is a very difficult one to draw in practice (e.g., is non-commercial content allowed on a site supported by advertising?). Thus, they designed a policy that focuses on using non-free content only when it’s necessary to properly illustrate an article and even then only with good technical requirements to ensure the content is not as easily reused as the rest of Wikipedia.

While Wikimedians support copyright reform and call for shorter terms and broader exemptions, the community also respects existing law. The guidelines that the Wikimedia movement has developed help prevent legal uncertainty and show how a community can organically build around the law to enable people to share their knowledge consistent with the values of free culture.
Jacob Rogers, Legal Counsel
Wikimedia Foundation
Thanks to Jan Gerlach and Stephen LaPorte for their assistance preparing this post