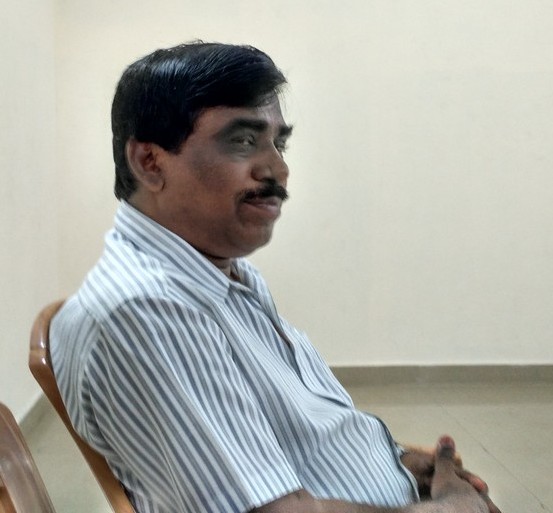 Kannada Wikipedian Vasanth S.N. during a Wikipedia workshop. Photo by Pavanaja, freely licensed under CC BY-SA 4.0.
Vasanth S.N.  has edited the Kannada-langauge Wikipedia since 2006. As part of the WikipediansSpeak series, I caught up with Vasanth to learn about his contributions to the Kannada Wikipedia, which just celebrated its 13th anniversary. In the discussion Vasanth shares his long time involvement in the Wikimedia movement, and what drives him every day to edit Wikipedia and helping other fellow Wikimedians.
Subhashish Panigrahi (SP): Hi Vasanth, thanks for agreeing to share about yourself. Can you tell me little about yourself and how you started contributing to Kannada Wikipedia?
Vasanth S.N. (VSN): I grew up in a small town in the Indian state of Karnataka. After completing my PG Diploma in Human Resources studies from Indira Gandhi National Open University (IGNOU) I started working at Dharmasthala temple in Karnataka where I have been working over last 35 years. As a student, I was voracious reader of Kannada-language books. Science, art and culture were my favorite subjects back then. I started contributing to Kannada Wikipedia back in 2006. Shushrutha, a scientist based outside India helped me with several technical needs like creating templates in Kannada Wikipedia. With his help, I contributed to articles related chemical elements. He helped a lot in importing templates then. These days another Wikipedia editor Omshivaprakash is helping in importing templates and several other technical needs I have, thanks to Pavanaja who is also helping and encouraging me regularly.
SP: What are you currently working on?
VSN: After the 14 volume Kannada encyclopedia “Kannada Vishwakosha” got relicensed under CC-BY-SA 3.0 license by Mysore University, we have started digitizing it on Kannada Wikisource. I am taking the digitized articles from here to Kannada Wikisource. I first check for the English Wikipedia article, use some of the updated content from there with citations, and wikify the Kannada Vishwakosha articles to create articles on Kannada Wikipedia.
SP: What are the kind of challenges you generally face?
VSN: Something that really bothers me is the low participation of Kannadigas in contributing to Kannada Wikipedia. I wish there could be more discussions in the village pump and collaborations between fellow editors. Many of the long time Wikimedians like Radhatanaya, who is probably over 70 years old, need more support with complex Wikipedia policies, and more appreciation. And so are B.S. Chandra from Sagara, Karnataka and many other editors so that every single editor feels to be an important aspect of the community. We also have to bring back editors like Tejas Jain who were active some time back but have slowed down over time. I feel bad that we are lagging behind our neighboring Wikimedia communities like Tamil and Malayalam. When we cannot scale up too fast, a valuable resource like Kannada Vishwakosha that I mentioned before would be really useful in populating Kannada Wikipedia with good quality article. The Vishwakosha is not just compiled by subject experts but has been updated over time. I am more than happy if more editors are willing to join use this encyclopedia as a resource and I am sure we could create over 14,000 articles that a handful of editors like me will take over years to complete otherwise. However the community is skeptical about just one citation but i think we could always rely on English Wikipedia and search for more resources for additional citations.
SP: What do you suggest we—all the Wikimedians, the Wikimedia India chapter, and us (CIS-A2K)—should work on?
VSN: I feel that we are focusing so much only on cities and there might be potential editors in rural areas. But may be reaching out to people who have access to computer and internet is a low hanging fruit as compared to outreach in rural Karnataka. There are over 46,000 state-run schools and many have computers. Taking Kannada Wikipedia to select schools with the facilities needed might result in bringing in flesh blood to the community. I also think that the veteran professors and educators could help grow Wikipedia by correcting articles and wikifying if not writing articles. There might be collectives of such people that I do not know of but in my opinion, it is worth trying. I tried to request some professors in Ujjire, Karnataka to help with correcting over 60 articles related to plant varieties of Karnataka but could not get much help. But that is just one failure and should not stop reaching out to more professors. And if a collective of professors does not exist we could find a common area of interest and create a group.
Subhashish Panigrahi, Wikimedian and Programme Officer, Access to Knowledge (CIS-A2K), Centre for Internet and Society
This post is part of the WikipediansSpeak series, which aims to chronicle the voices of the Wikipedia community. You can find more of these posts on the Wikimedia Commons. The views expressed are not necessarily those of the Wikimedia Foundation or Wikipedia; responses and critical commentary are invited in the comments section below.