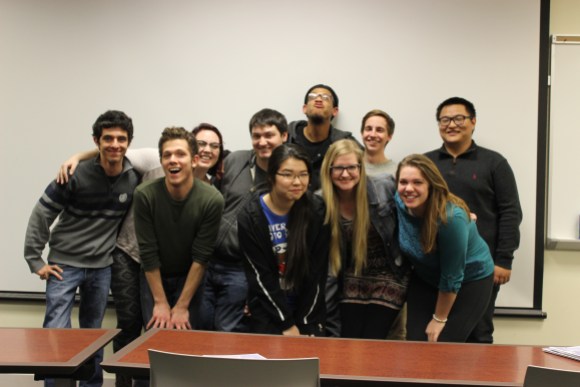 Wikipedia Connection is Ohio State’s student club. Photo by Kevin Payravi, freely licensed under CC BY-SA 4.0.
When I was a freshman at the Ohio State University, a school with over 60,000 students, I tried to find a Wikipedia club, but none were out there. I thought to build a club of my own, but there weren’t any active Wikipedia student clubs out there that I might learn from.
Kevin Payravi, a fellow Wikipedian and student at Ohio State, shares a similar story. He came to Ohio State one year later than me, and also found that there were no Wikipedia-related clubs—but unlike me, he decided to make a difference. He served as a campus ambassador in his second year at Ohio State, but the program did not continue in next year due to the busyness of instructors. Kevin saw the problem behind the education program: there was no on-campus network where an education program could flourish.
The following semester, he launched a new student organization called Wikipedia Connection. The goal of this club is to connect Ohio State students and staff to Wikipedia through lessons, workshops, and other events. At many universities, including Ohio State, financial and advising support exists for student organizations, which allowed Kevin to easily start the club.
It’s fairly common for Wikipedians to first start editing as students. In the past few years, hundreds of education programs and edit-a-thons have taken place around the world. Undoubtedly Wikipedia and the Wikimedia movement have a lot of common ground with universities. It has been shown that the college campus is one place that the Wikimedia movement should focus on. As the saying goes, “Wikipedia belongs in education.”
Within the past year, Wikipedia Connection has held over ten weekly workshops and a Buckeye Edit-a-Thon. Maria Rimmel, a friend of Kevin’s, was inspired by him. She said, “I had a great time collaboratively editing and I would love to attend more events like this in the future!” after attending the Buckeye Edi-a-thon. Not only did all attendees of the event enjoy it, but Kevin also learned a lot from his first Wikipedia event. In his own blog, he summarized four tips that he learned from the experience.
From the Buckeye Edit-A-Thon to weekly workshops, Ohio State’s latest Wikipedians have started to improve topics related to Ohio—particularly local topics that need maintenance and have plenty of room for growth, such as articles related to the university, the city of Columbus, and state government.
Any student club serves as a hub of local community in and around campus. Wikipedia Connection ties students from the education program with those who are not, along with bringing those students together with faculty and Wikipedians from the surrounding area. Wikipedia Connection has the goal of building up a local community at Ohio State, but also the greater central Columbus area. It can be a challenge; back in 2009, there were two Columbus meetups planned, but they never happened. Back when I started to hold meetups in Shanghai, it ended up with less than five people in the first two events. While the club started small, Kevin learned from these experiences and decided to use the periodical workshop that we currently hold every week in order to gradually attract the attention of more students, faculty, and Wikipedians in the area.
This semester, besides hosting weekly workshop every Wednesday night, Wikipedia Connection will also hold an Art+Feminism Edit-A-Thon on March 5. Other planned events include an edit-a-thon (either focusing on Ohio State or collaborating with another student organization), and a “Wikipedia Take Columbus” event in which participants will photograph Ohio State’s newly renovated campus and the surrounding Columbus area. The club is also working on building a robust network on campus in order to connect more professors, instructors, advisers and librarians for the preparation of future events.
Beyond the student club itself, I’ve observed that Kevin is getting experience and leadership by holding events and running the club. The Wikimedia movement certainly needs more experienced community leaders, and student clubs are a perfect place to foster this growth.
Addis Wang
Wikimedia User Group China and Wikipedia Connection
The views expressed are not necessarily those of the Wikimedia Foundation or Wikipedia; responses and critical commentary are invited in the comments section below.