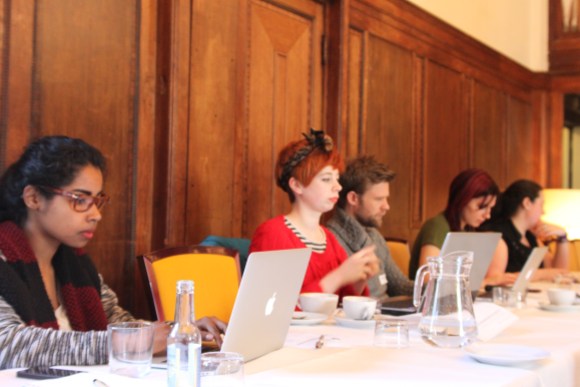 Art+Feminism Wikipedia Edit-a-thon, Amsterdam. Photo by Postmodemgrrrl, freely licensed under CC BY-SA 4.0.
We are excited to announce that the third annual Art+Feminism Wikipedia Edit-a-thon will take place on the weekend of March 5–6, 2016 at the Museum of Modern Art in New York and at least 125 other locations on all six inhabited contents.
Art+Feminism is an all-day event designed to generate coverage of women and the arts on Wikipedia and encourage female editorship. At our events we’ll have tutorials for beginner Wikipedians, ongoing editing support, reference materials; many events will have childcare and refreshments.
In New York, the edit-a-thon will launch with a conversation on the intersection of feminism and digital culture with writer Orit Gat, artist and activist Reina Gossett, and New York Times technology columnist Jenna Wortham, moderated by Fiona Romeo, MoMA’s Director of Digital Content and Strategy. Afternoon breakout groups will discuss related issues such as intellectual property, notability, and LGBTQ visibility on Wikipedia.
To prep for the edit-a-thon, we held a public Wikipedia workshop at the Guggenheim Museum on February 16. After a tour of the exhibition Photo-Poetics: An Anthology with curators Jennifer Blessing and Susan Thompson, we lead a training workshop on best practices for writing strong entries.
Not in New York? We are continuously expanding our reach across the globe. This year for the first time we will have events on all six inhabited continents. Additionally, Women in Red is hosting a month long virtual edit-a-thon, from March 1 to 31, allowing editors who can’t attend ‘in real life’ events to participate in the work. Node edit-a-thons are set to take place throughout March in over 20 countries at over 125 venues, like Ashesi University Brekuso, Accra; The Banff Center; Tate Britain, London; Los Angeles County Museum of Art; Museo Universitario Arte Contemporáneo, Mexico City; Yale University, New Haven; Archives Nationales, Paris; Philadelphia Museum of Art Library, Philadelphia; Art Gallery of Ontario, Toronto; and the National Museum of Women in the Arts, Washington, DC.
Last March, over 1,500 participants joined our second annual Wikipedia edit-a-thon at The Museum of Modern Art in New York and more than 75 satellite events around the world to create nearly 400 new pages and significantly improve 500 Wikipedia articles about female artists, feminist artistic movements, and feminist scholarship.
Wikipedia’s gender trouble is well documented; in a 2011 survey, the Wikimedia Foundation found that less than 10% of its contributors identify as female. This lack of female participation has led to a lack of content about women and art in the world’s most popular online research tool. In support of our mission, the Wikimedia Foundation has granted the project $56,000, supplementing $25,000 in previous funding.
We are continually shifting and expanding to make this project more sustainable. Our goal in planning this year was to be conscious of the ways in which we can be more intersectional in our feminist practice. In order to be responsive and responsible to the people who attend our events we have written a Diversity Subcommittee into our grant and updated our training videos on YouTube to include more diverse examples. We are also super pleased to have Stacey Allan, Amber Berson and Richard Knipel on our team as regional organizers. We have an amazing opportunity with Wikipedia to alter the structural biases of past encyclopedic projects. We’re really proud that we’ve been able to inspire participants to continue this work through a number of Inspire Grants for the nodes, monthly meet-ups, and other activities.
The 2016 Art+Feminism Wikipedia Edit-a-thon is organized by Siân Evans/Art Libraries Society of North America’s Women and Art Special Interest Group, Jacqueline Mabey/failed projects, and Michael Mandiberg, in collaboration with the Professional Organization for Women in the Arts (POWarts) and The Museum of Modern Art, with support from Tekserve, Wikimedia NYC, and the Wikimedia Foundation.
Siân Evans, Librarian and Implementation Manager, Artstor, Art Libraries Society of North America’s Women and Art Special Interest Group
Jacqueline Mabey, Independent Curator and Art Worker, failed projects
Michael Mandiberg, Associate Professor, CUNY Graduate Center and College of Staten Island/City University of New York
The views expressed are not necessarily those of the Wikimedia Foundation or Wikipedia; responses and critical commentary are invited in the comments section below.