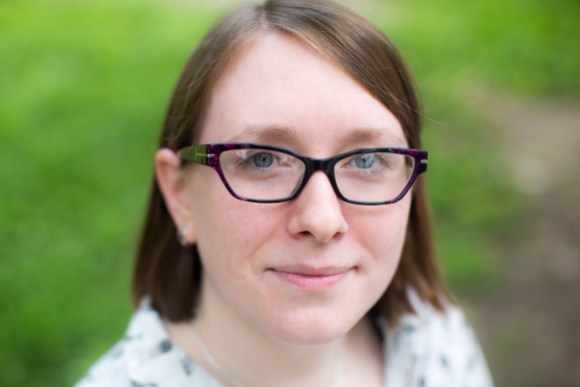 Photo by the Victor Grigas, freely licensed under CC BY-SA 3.0.
Rebecca O’Neill is helping both to plug gaps in Wikipedia’s coverage of women in art while simultaneously researching why people even want to.
Based in Dublin but raised in the small town of Carlow in Ireland, Rebecca is currently working towards a PhD focused on the terms “curation” and “curator” with regards to cultural institutions—and she’s using her Wikipedia experiences to help inform that research.
Through this research—supervised by Toni Sant, a Maltese academic who also happens to be the education coordinator for Wikimedia UK, the independent British Wikimedia chapter—she is investigating why people contribute to projects like Wikipedia and the rise in crowd-curating knowledge.
“I don’t study Wikipedia necessarily,” she says, “I’m just interested in why people have this urge to be involved in this. It’s what some people call this encyclopedic urge… Rather than sitting down and watching telly for five hours, you sit down and you commit yourself to writing articles.”
Why editors contribute to Wikimedia projects, and indeed any openly editable project, is a topic of interest to researchers. Back in 2007, Oded Nov, an Associate Professor at New York University, surveyed 151 editors from a random sample. He found that most of them edited for fun or because they believed in the projects’ ideology—or both.
In 2010, researchers Cheng-Yu Lai and Heng-Li Yang discovered that internal motivations were the strongest among contributors. Four years later, they wrote that “subjective task value, commitment, and procedural justice” led to Wikipedians feeling satisfied with their edits and, crucially, motivated them to continue editing.
“They just have an inherent belief that there is something beyond themselves,” says Rebecca. “They feel passionately about something, they see a gap and they attempt to fill it.”
Speaking of writing articles, Rebecca spent much of the summer of 2015 doing the “100wikidays” challenge—creating a new Wikipedia article every day for one hundred consecutive days.
“The way that I framed my [challenge] is that I’m interested in Irish content, and I’ve taken that in a really broad way,” she explains. “I’m kind of closing that gap.
“I’ve done articles on Irish national monuments that didn’t have articles, but got images through last year’s Wiki Loves Monuments. Primarily it’s around women… Irish women artists who don’t have articles.”
During Rebecca’s challenge, she’s written on people like Margaret Clarke, a portrait painter most active in the 1920s and 30s. She was the wife (and eventual widow) of Harry Clarke, whose article has existed since 2002.
“She wasn’t even mentioned on Harry’s page, which galled me no end,” she says, “but [through] the social group around the 100 days [challenge] it was picked up, [and] has now been translated into several different languages including Hebrew and Ukrainian.”
As well as editing articles herself, Rebecca is a member of Wikimedia Community Ireland, a user group within the country which runs training sessions and events to teach people the value of contributing to the Wikimedia Projects. She helps lead outreach efforts in universities, as well as galleries, libraries, archives, and museums.
“I meet so many people who are involved in the advocacy of Irish women’s history that don’t actually realize that the edit button is there or they think that there’s some kind of hoops you have to jump through,” she says. “But actually, the barrier to entry is quite low.”
Indeed, she finds educators are interested in how editing Wikipedia can teach students about the concepts of verifiability as well as how to perform academic research.
“It’s the demystification of it, which can only take a few minutes,” she explains. “If somebody is technically able, or has some kind of technical nous at all… they can very quickly start making quite a big difference.”
Rebecca’s work over the summer has helped to narrow Wikipedia’s gender gap, and her training sessions with Wikimedia Community Ireland will help motivate others to continue toward this goal in years to come.
“[Wikipedia] is the future of how knowledge is going to be generated… collated, tweaked, brought together, communicated,” she adds. “It’s the way that nearly all kind of large knowledge projects are going. To try and kind of demean it or play it down and its cultural impact, it’s a fool’s errand.”
Profile by Joe Sutherland, Communications Intern
Interview by Victor Grigas, Storyteller
Wikimedia Foundation