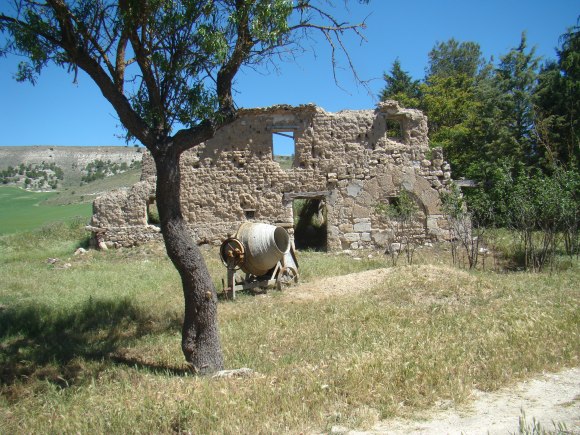 Peñalba de Duero. Photo by Lourdes Cardenal, freely licensed under CC BY-SA 4.0.
Alfonso V of Aragon was born in 1396; known as Alfonso the Magnanimous, he was the king of territories all over the western Mediterranean between 1416–58. Much of his childhood and youth were spent in the village of Carrioncillo, in the present-day province of Valladoli, where his father owned a palace. History tells us that during a stay at the court of Naples, he still remembered the place fondly. Over time, the population went into decline, and in the 20th century it was ruined and abandoned. Today, only a chapel and a few walls remain standing.
Villacreces’ history is not very different from Carrioncillo. It is located in the fertile Tierra de Campos and was held by the Admiral of Castile in the 15th century. It did well into the 19th century even hosting a hospital, but in the next century it was hit by the country-wide rural exodus and completely depopulated. The last inhabitants were a family who decided to emigrate in 1981. By now, the ruin of the town is unstoppable: in 1989 the 16th century church was dismantled, and other buildings, made of adobe and wood, lose their battle against time gradually.
These are but two examples of a reality that affects all of Spain. Even though depopulation has been developing for centuries—it often occurred after epidemics or wars—it was not until the mid-20th century when it intensified, thanks to a governmental development policy that facilitated rural exodus to the cities. Industrialization, the modernization of agriculture, and forced displacement resulting from the construction of infrastructure all played roles as well.
In short, generations abandoned villages.
Today the phenomenon has not stopped; it is a constant threat. While years ago these places were depopulated by emigration to the cities, today the risk comes from an aging population. With scarce job opportunities, there is no generational change and the population disappears. According to some sources, the number of depopulated areas in Spain is close to 3,000. It is likely that there will be more in the coming decades.
The disappearance of a place is not limited to a clear spot on the map. Centuries of history, traditional culture, hard work in the field, family stories, celebrations and joys, and their collective memory is all lost. Only ruins remain as a vague memory of its existence.
Faced with this problem, in March 2015 Wikimedia Spain planned to create or improve articles in Wikipedia about depopulated places. In the last year, we’ve created articles on places like Carrioncillo, Somaconcha, Sardoncillo, Peñalba de Duero, Villacreces, Fuentes de Duero, and others. We’ve found that there is usually very little information and imagery for these places in recently published scholarly sources, so we have been forced to dig deep and make site visits to obtain freely licensed photos.
Despite these ups and downs, we are very happy with the work we do. We believe that the contributions and the visibility offered by Wikimedia projects is a way to introduce these places, their histories, their heritages, and ensure that their memories will not disappear entirely.
Lourdes Cardenal and Rubén Ojeda, Wikimedia Spain