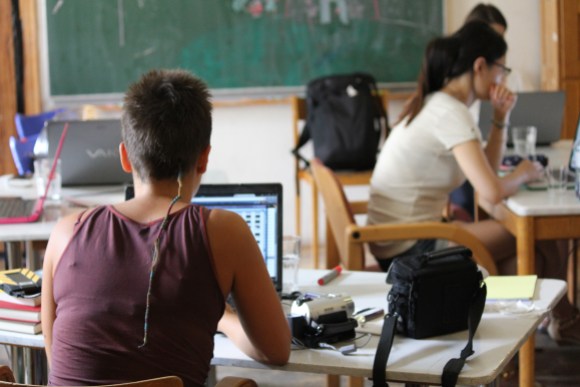 Photo by Xendzi, freely licensed under CC BY-SA 4.0.
Last year I had the privilege to coordinate a community project that I’ve in mind for a long time. I imagined a rather small and grassroots community project that would break down borders of languages and countries and unite people who want to create awareness by discussing, researching and in the end providing knowledge about topics of sociopolitical relevance.
Out of this idea came “Wikipedia for Peace,” which took place in Vienna (Austria) in August 2015.
The project turned into a collaboration between Wikimedia Austria and the Austrian branch of the peace organisation Service Civil International (SCI). SCI organises volunteering camps (“workcamps”) where people from different cultural and social backgrounds come together to live sustainably and work for a non-profit cause. Together, we found and gathered 12 volunteers from different European countries and created a two-week workcamp, in which we were allowed to discover the many different layers of contributing to Wikipedia and its sister projects in 9 different languages. We lived, cooked, learned and worked together.
The outcome of “Wikipedia for Peace” was more impressive than I expected: even though almost everyone involved was new to Wikipedia, soon after the camp started all of us had found topics we were passionate about to work with and explore. Our group had many more women and a much lower average age than Wikipedia commonly has. This shaped the interests and perspectives we wanted to add to articles or write about. We wrote about, among other topics, asylum seekers in Austria, masculinity and feminism in Bulgaria, the Irish humanitarian missions in the Mediterranean Sea, non-violent resistance, and peace museums. Thanks to our focus on peace issues in combination with the promotion of the access to open content, the Austrian Commission for UNESCO took the project under its patronage.
Wikipedia was not the only platform we worked on. One of the best aspects of “Wikipedia for Peace” was to have the opportunity to get to know more about several other Wikimedia projects: we heard about the possibilities of Wikidata, enriched Wiktionary with peace vocabulary in our native languages, and had a good time hunting for missing pictures of cultural and natural monuments in Vienna.
One of my favorite moments of the project was when we, people from all over the world, explained to locals in Vienna that the tree in their garden or backyard is officially registered as a monument, and that we would like to take a picture of it
I learned a lot from “Wikipedia for Peace”. I learned to combine the kind of volunteering I had known from Wikimedia projects with the kind of volunteering I had known from SCI workcamps. Others learned new opportunities as well: for the Wikimedia community in Vienna, it was unusual to see such an international and young crowd gathering in deliberately very low-cost living conditions. For the community of Service Civil International, it was unusual to even think of gathering people from different countries just to let them sit in front of computers together, when living conditions in workcamps usually don’t even provide internet connection. It was an amazing experience to try and succeed in this combination.
I would love to see the spirit of our last August being kept alive by people interested in contributing to a culture of peace and open content. Maybe in the countryside to have a more relaxing environment than a city? Maybe with a more specific key topic such as migration, arms trade, or gender equality? Maybe with more picture hunts and more collaborative writing? The potential is huge and waiting to be explored—we are planning to incorporate some of these ideas into the next edition of the peace camp this summer in Austria. Get in touch with us if you want to contribute or attend!
Thomas Schallhart
Peace activist, Wikimedia volunteer in Austria/Sweden

The views expressed in this post are not necessarily those of the Wikimedia Foundation or Wikipedia; responses and critical commentary are invited in the comments section below.