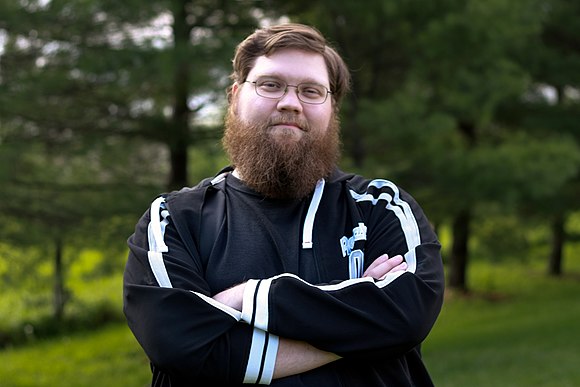 Justin Knapp became the first person to make one million Wikipedia edits on 19 April 2012. Photo by Danny Phillips, public domain/CC0.
Justin Anthony Knapp is a tireless and dedicated American Wikipedian from Indianapolis, Indiana. He has over 1,495,000 edits on English Wikipedia and a total of more than 1,523,000 edits on all Wikimedia projects—a volume which many dedicated Wikimedians will find difficult to achieve. He was ranked No. 1 among the most active Wikipedia contributors of all time, a feat that added to his notability and led to a separate article on Justin Knapp in the English and many other language Wikipedias.

Justin joined Wikipedia on 6 March 2005 after anonymously editing for months. Within seven years of editing, he made history in 2012 by completing one million edits. But this achievement was in itself far from complacency; Justin continued his editing journey and today he has surpassed 1.5 million edits and he is still glued to Wikipedia and other Wikimedia projects with even more enthusiastic mission.
As we spoke to Justin, we found in him an unfailing quest for knowledge, people and, places. He has visited about half of the USA traveling by bus and air. He specifically recalled his visit to New York City and United Nations building, where Justin delivered a speech at the UN in 2005. He also attended Wikimania 2012 in Washington, DC.
Speaking about his association with Wikipedia and other Wikimedia projects, Justin asserted that has contributed something to most Wikipedias, alongside a few dozen pieces of media to Commons, a couple of Wikiquote articles, and a few Wiktionary entries.  He also started editing Wikivoyage when it became a WMF project. His main interest is in updating the article on his home city of Indianapolis, although he has edited a lot of other content as well.
On a closing note, Justin said he likes to connect online communities and help them wherever he can. Elaborating on his future plans, he wrote that he has made it a point to edit more in other WMF projects and beyond (such as Wikiindex), which he hopes to carry forward in the future.
Syed Muzammiluddin
Wikimedia Community Volunteer