In March 2015, the Hatnote team (volunteer developers Stephen LaPorte and Mahmoud Hashemi) announced that the “Humble Hashtag is now on Wikipedia”, launching the first hashtag search tool for Wikipedia edits.
Every Wikipedia edit is accompanied by an edit summary, a short description of the changes made in each revision. If you include a hashtag in the edit summary, you will see your edit appear on the search page alongside other similar edits.

One year later, hashtags are providing vital insight into Wikipedia editing events in over a dozen languages. This post explores some of the success stories made possible by dedicated volunteers using hashtags on Wikipedia.

One of Wikipedia’s biggest movements has been the Wikipedia Library’s #1lib1ref. In January 2016, the Wikipedia Library (@WikiLibrary) asked librarians and Wikipedia volunteers around the world to imagine “if every librarian added one more reference to Wikipedia.”
This campaign continues today, its global momentum still building in part by #1lib1ref usage on mainstream social media, but also on Wikipedia itself.

Hashtags not only spur interest, but are prove effective in archiving contribution history and gauging editor reach. Previously editors would report their edits to organizers, who really had to work to maintain complete records. Now, new editors need little to no explanation and, The Wikipedia Library organizers can watch the contributions roll in.
That said, even the most experienced editors need a reminder.  Getting remote participants around the world to write useful edits summaries continues to be a challenge — and we expect the 1250 edits with the hashtag to underestimate participation in the campaign by as much as 50%. For our notes on best practices and and more about the #1lib1ref campaign, check out our lessons learned.

So easy a robot can do it

Wikipedia editing never stops, and volunteer automation in the form of bots help keep the edits going around the clock. These bots fill tedious gaps, usually with small edits that add up to make a big difference, allowing more editors to work on harder problems.
One of these tireless bots is User:Cyberpower678’s Cyberbot II. This bot fixes dead links on English Wikipedia by pointing to backups provided by the Internet Archive. But in its thousands of edits per day, Cyberbot II also has other jobs, like fighting spam. By simply adding #iabot to its archive link edits, the bot keeps a record of the deadlink task within its other work, and everyone can see it has replaced links on almost 90,000 pages—over 200,000 links saved!

Similarly, on Wikidata, Wikipedia’s structured data sister project, there have been a number of tools transforming the tedious into something easy and fun, like Magnus’s Wikidata Game. The Wikidata Game and other similar tools now use hashtags to show how different people contribute to Wikidata.

Still other hashtags have been used to maximize the impact of our communities working on  improving balance on Wikipedia. Take, for example, the usage of the hashtag during a recent editathon at the Helsinki University Library Kaisa House in Finland focused on prominent women. 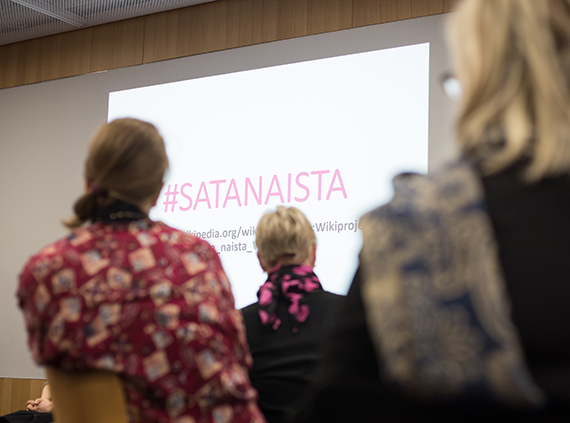 Photo by Wikimedia Finland, CC BY-SA 2.0.
Organizers asked the event’s 100+ participants, many of whom were new editors, to use the hashtag #satanaista, meaning “100 Women” in Finnish. One of the event’s organizers, Teemu Perhiö of Wikimedia Finland (Suomi), said, “hashtags were easy to teach to the audience as it is something they are used to in other social media.” For the organizers, hashtags provided an easy way to explain a very particular part of Wikipedia’s design and culture: “the edit summary is sometimes confusing; people don’t know what to write, so now at least they had simple guideline to it, just add the hashtag!”
For Finnish Wikipedia, the visibility of the hashtags makes them a catchy convention. Bigger Wikipedias see dozens of edits per minute, often burying hashtagged summaries. Perhiö writes “edits with hashtags were visible on our Recent Changes feed, making the hashtag more meaningful in Finnish Wikipedia due to the smaller editor base.” For them, the right hashtag signified a well-meaning edit: “Experienced Wikipedians noticed the hashtag and could easily realise when edits were related to the event. Knowing this, Wikipedians could tune their approach and assume good faith more easily.”
Other editors have used hashtags to help follow editing related to the March Art+Feminism event, the Wikipedia Gender Gap, and editing related to the Eemhuis in Amersfoot, Netherlands.

Hashtags for every Wikimedian!

Ultimately, we hope to see the hashtag become useful for a whole range of Wikimedia communities and projects, and you can help. In the short term, experiment with the hashtags in your own language community! If you use the hashtag in a new or novel way, let us know!
If you plan to use hashtags on a currently unsupported Wikimedia wiki or discover a bug, report an issue to Hatnote on Github. Also, if you care as much about community organization as we do, join the conversation about making hashtag support an integral part of Mediawiki!

*While Stephen works with the Wikimedia Foundation, his involvement here has been only in his volunteer capacity.

All screenshots in this article are from Stephen LaPorte and Mahmoud Hashemi, public domain/CC0.