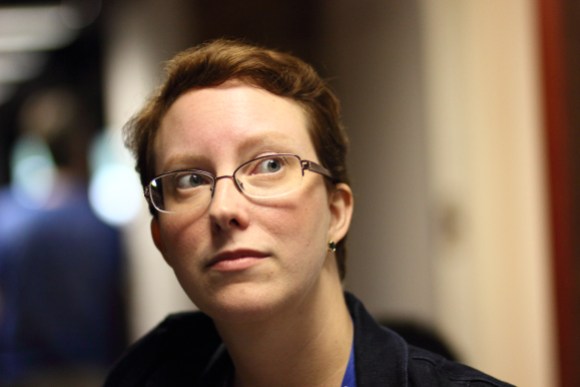 From the photographer Sage Ross: “I remember laughing and talking and laughing and talking at Wikimania 2012. I took this picture of her that she used for a long while as a profile pic. Someone on Facebook said it looked ‘skepchickal’, which she loved.” Photo by Sage Ross, CC BY-SA 3.0.
Two years ago today, the Wikimedia community was shocked by the death of Adrianne Wadewitz from injuries suffered during a rock-climbing fall. Adrianne was a well-known and popular editor on the English Wikipedia, where she authored 36 featured articles and organized edit-a-thons in Los Angeles. She served on the board of the Wiki Education Foundation, and was a vocal public Wikipedia advocate on HASTAC, an online group that works with scholars in the humanities, arts, and sciences on innovative collaborations on new modes of learning and research in higher education.
Adrianne was born on 6 January 1977, and graduated from high school in North Platte, Nebraska, a railroad town of about 25,000 people. She attended college at Columbia University, a prestigious institution in the heart of New York City, and graduated in English with the honor of magna cum laude. After receiving a PhD in British literature from Indiana University, in 2013 she took up a Mellon Post-Doctoral Fellowship at Occidental College in Los Angeles. She had recently accepted a position at nearby Whittier College where she was recruited to help “develop their digital liberal arts program.”
Adrianne took up rock climbing in the summer of 2013, and she blogged about how it changed her:

For me, one of the most empowering outcomes of my year of climbing has been the new narrative I can tell about myself. I am no longer ‘Adrianne: scholar, book lover, pianist, and Wikipedian’. I am now ‘Adrianne: scholar, book lover, pianist, Wikipedian, and rock climber’. This was brought home most vividly to me one day when I was climbing outdoors here in Los Angeles and people on the beach were marveling at those of us climbing. Suddenly I realized, I used to be the person saying how crazy or impossible such feats were and now I was the one doing them. I had radically switched subject positions in a way I did not think possible for myself. That, I realized, is what I want my students to experience—that radical switch and growth. It is an enormous goal and I would love to hear how others work at achieving it with their students.

On the English Wikipedia

On Wikipedia, Adrianne was one of the early editors; she registered on 18 July 2004 as “Awadewit” when she was attending graduate school. She wrote quite a few articles, but zeroed in on her favorite, Mary Wollstonecraft, an 18th-century English writer and women’s rights advocate. Over the course of a year, Adrianne wrote most of the entry and shepherded it through several reviews until it became one of Wikipedia’s then 1700 featured articles. She worked on an entire series about the author, including all of Wollstonecraft’s major works and a timeline of her life. In 2008, Adrianne spoke to the Signpost about Wollstonecraft: “When I first looked at [her] article on Wikipedia, one of the subjects of my dissertation, it looked something like this. I was appalled! One of the first feminists! Dissertations tend to make a person think a topic is the most important thing ever, so, of course, I thought it was a travesty that Wollstonecraft’s biography was reduced to this bland recitation of a few facts. I resolved to change that.”
Adrianne received high praise from Wikipedia editors for her work on the article. Qp10qp, for example, wrote: “It adds up to a colossal achievement—I mean, what we have here is the equivalent of a book. The thoroughness, attention to detail and discerning study of the best sources simply takes my breath away. Any student of Wollstonecraft who clicks Wikipedia will hardly believe their luck in striking this treasure trove. Wikipedia at its finest.” More recently, English Wikipedia editor Liam Wyatt related his belief that the Wollstonecraft articles made Adrianne “the single most cited/read Wollstonecraft scholar ever,” and after her death Wikimedia Foundation executive director Sue Gardner told the New York Times that “she may have been our single biggest contributor on … female authors [and] women’s history.”
Shortly after Wollstonecraft received its featured status, she agreed to be interviewed on episode 35 of the Wikipedia Weekly podcast by Wyatt. It was titled “Secretly Famous,” as it described her as an editor “who has to hide her activities [on Wikipedia] for fear of jeopardizing her career”:

Wyatt: So you’re worried that if you publicize … your interest and experience on Wikipedia, that you won’t get a job because you’ll be laughed out of town?

Wadewitz: It is, because I really view that the time I have spent working on things for Wikipedia, which is really just what I’m studying, as sort of public service, as part of being a public intellectual, because I’m often engaged in conversations with people on Wikipedia where I feel like I’m explaining what it means to be a scholar, and I’m explaining even down to the level of well, here’s how you write a paragraph, or here where you write a sentence. Right? Is that a waste of time? No. I don’t think so. Because that’s what I do all the time.

It was after this interview that Adrianne became a high-profile member and advocate for Wikipedia in scholarly circles. Liam Wyatt reflected on the 2007 interview in a tribute on Adrianne’s talk page, reminiscing that “Not long after [the interview,] you ‘came out’ and made your wiki-work a core part of your career—using it … to bolster your academic CV.” She would later attend Wikimania 2008 to give a presentation about her use of Wikipedia in the classroom.

Aside from her prolific article writing, Adrianne was a champion for Wikipedia’s use in the digital humanities, believing it offers one of the best places for research that will have an impact on the public.
Adrianne became a prominent voice in the academic community. The Wiki Education Foundation (Wiki Ed) said in a statement that “Her pathbreaking essay on teaching with Wikipedia, “Wiki-hacking: Opening up the academy with Wikipedia“, served as the basis for the preliminary pilot of the program”, the Public Policy Initiative. They continued: “Adrianne was one of the first people to volunteer to help support university instructors looking to incorporate Wikipedia as a teaching tool in their classrooms; over the last four years, Adrianne has supported more than 20 courses as a Wikipedia Ambassador as well as teaching two courses herself.” She later became a founding board member for the then-fledgling foundation.
Perhaps even more importantly, she became the face of Wikipedia editing (literally) when her photo was featured on the cover of the first printed “Editing Wikipedia” brochure put out by the Wikimedia Foundation.
She related how her Wikipedia work had benefits in the classroom: “My ‘coolness factor’ as a teacher has risen. I frequently use Wikipedia as a teaching tool in an effort to explain what a reliable web source is and to teach basic copyediting skills. While discussing these rather mundane topics, I often tell little Wikipedia stories. That I write Wikipedia articles is apparently ‘awesome’. I also dramatically rose in my students’ estimation when Mary Shelley appeared on the main page on 30 October 2008.”
Adrianne’s HASTAC blog became a prominent voice in communicating and encouraging academic involvement in Wikipedia. An example of her work there comes from 2013, when she responded to the sexist “American women novelists” category: “If only there were more women on Wikipedia, the argument goes, this would not have happened. But no one has talked to the women who actually are on Wikipedia.”All of this underlines the fact that Adrianne was one of the strongest proponents of Wikipedia’s efforts to attract more female editors—her wish to enable better communication of underrepresented minority-related content.
In addition to this active public voice, she researched the place of humanities method and process within Wikipedia, a product of her extensive collaborations with a number of Wikimedians and academics. Wikimedian Alex Stinson, who considered Adrianne his mentor in thinking about Wikipedia’s role in the digital humanities and co-wrote an academic paper with her, wrote “the common mission we shared bridging Wikipedia and Digital Humanities community has gotten unimaginably harder. Her contribution was tireless and compelling and finding anyone to fill her shoes will be nigh impossible.” HASTAC’s Cathy Davidson wrote “she is a natural leader, an inspiration to us all … she represents the best of academe.”
Her drive was the inspiration for a plethora of edit-a-thons held in her memory in 2014 and 2015. Her partner, Peter B. James, wrote on the first anniversary of her death that people have “carried on with a memory of her passion, dedication, and tenacity to help move Wikipedia forward, and worked to continue her legacy of inclusive advancement of knowledge.”
It is a torch that will never be put out.

This tribute has been adapted and shortened from an obituary published in the Signpost in April 2014. A number of tributes can be read there.