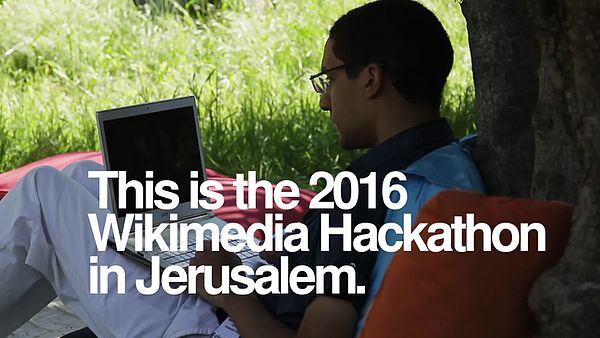 WATCH: video of the 2016 Wikimedia Hackathon in Jerusalem. You can also view this on YouTube and Vimeo. You can watch a version with open captions (without burned-in English subtitles) on Commons. Video by Victor Grigas, CC BY-SA 3.0
The Wikimedia Hackathon in Jerusalem (1-3 April 2016) will be remembered as a very successful experiment: it was the first time that the developer event was organized outside of Western Europe, the first time that the Community Wishlist—another promising experiment—was presented as a goal, and the first time that other developer activities were organized by other groups.  Thanks to the attraction of the Hackathon, the Wikimedia Hackathon was accompanied by WikiArabia technical meetups in Amman and Ramallah.
The basic formula of the Wikimedia Hackathon remained untouched: an international gathering of developers and other technical contributors working on different projects and combining a mix of interests, skills, and experience levels. 118 participants from 18 countries worked in at least 36 projects that were showcased at the end of the event. There were also dozens of discussions, scheduled or improvised. Other numbers supported the success of the event. For 36 people (42%), this was their first Wikimedia Hackathon. 24 participants (29%) were women. 24 participants (29%) came from Israel (excluding Wikimedia Israel staff), 40 (33%) were affiliated with various Wikimedia chapters, and 35 (29%) were Wikimedia Foundation staff.

The connection with the Community Wishlist

The idea of a showcase had been a successful experiment at the Wikimedia Hackathon 2015, an instant winner. The showcase was an incentive to get demonstrable results, and to share them with pride and joy within the big group that had lived together during three intensive days. However, the results of last year showed that almost none of the dozens of projects showcased had been completed and deployed after the event—or put a different way, there were many promising projects but almost none of them have yet benefited real Wikimedia users.
This is why this time we experimented with the Community Wishlist, selecting some projects suitable for the Hackathon and encouraging participants looking for ideas to work on them. The hypothesis was that even if these developers didn’t complete their projects in Jerusalem, the continuous focus on the Community Wishlist in future activities would increase the likelihood of these projects being picked up again until they are ready to be used.
Eight Community Wishlist requests saw some progress in Jerusalem:

Many other projects were showcased as well, notably:

The bet on a non-European host for the Wikimedia Hackathon paid off in many ways. The local participation was well represented with some experienced Wikimedia developers, some newcomers recruited weeks ago at a workshop in Tel Aviv, and many editors that volunteered in the organization of the event under an impeccable coordination by the Israeli chapter. Thanks to the meetup in Ramallah (so close geographically, so distant politically), a symbolic participation of two Palestinians materialized.
In addition to the critical mass of participants from Western Europe and North America, it is worth mentioning the emphasis put by the organizers on sponsoring several participants from Eastern Europe, three developers from India (all successful Google Summer of Code students), and one from Argentina.
Once the visitors got used to the local standards of security, everybody enjoyed all that the old and the new city has to offer. The somewhat labyrinthine Hansen House provided a perfect setting for the Hackathon, with rooms of all sizes, a very social patio assorted with food and drinks, and a traditional garden with trees, pillows, and good WiFi. Up above, a warm sun and the blue sky. In the evenings, the Hackathon troupe moved to The Post Hostel, entirely booked for us, to continue working, eating, drinking, and eventually sleeping.

WikiArabia as an inspiration to experiment further 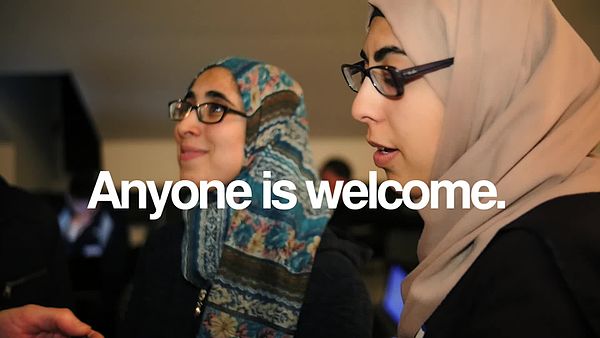 Video of the 2016 WikiArabia tech meetup. You can also view on YouTube and Vimeo. You can watch a version with open captions (without burned-in English subtitles) on Commons. Video by Victor Grigas, CC BY-SA 3.0.
The Wikimedia Hackathon in Jerusalem, and the WikiArabia tech meetups in Amman and Ramallah, were unrelated events. In fact, international politics set them so far apart that for the locals of each area it was between very difficult and impossible to trespass. This difficulty became a motivation to explore possibilities. The Levant User Group invited the Wikimedia Foundation to co-organize the two meetups under the umbrella of WikiArabia, a few international tech contributors responded to the call, and both unprecedented events got about 30 participants each. A success beyond our initial expectations, that we hope will result in more local Wikimedia tech activities in the region.
A secondary effect of the success of these workshops points to the Wikimedia Hackathon 2017, organized by the Austrian chapter in Vienna. Wikimedia Austria is already exploring the possibility of organizing introductory workshops together with CEEWikiLink partners in Eastern European cities, with the intention of inviting the best newcomers to the Hackathon. This model could be also picked up by other chapters, who could organize these workshops in their own regions as well. The Wikimedia Hackathon would become an incentive to organize local workshops for newcomers anywhere, and these workshops would become an incentive to organize a more international and more diverse Wikimedia Hackathon.
This is the beauty of the Wikimedia Hackathon: a stable core concept open to continuous experimentation. Next iteration: Wikimania Hackathon in Esino Lario on 22-23 June.
Quim Gil, Engineering Community Manager
Wikimedia Foundation