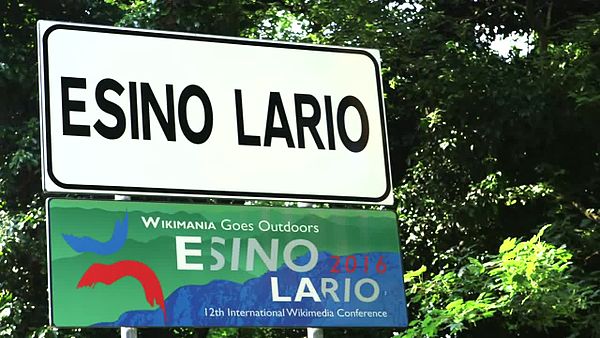 Video of some of the sights and sounds of Wikimania 2016. You can view it on Wikimedia Commons, YouTube and Vimeo. Video collated by Victor Grigas, CC BY-SA 3.0. See links for more credit details.
On the final day of Wikimania, the annual conference of the Wikimedia movement, Nigerian and Pakistani refugees lodged in Esino Lario, Italy, joined with Wikipedia editors from around the world for an edit-a-thon.
Wikimedians aimed to show them how to edit Wikipedia in their native tongue.  Wikimedian Felix Nartey, from Ghana, told us that he hoped editing Wikipedia would give these refugees a positive way to pass the time during the long days of waiting for their asylum applications to be processed by the European Union. “Editing could allow them to contribute back to their native countries while waiting for their applications to go through,” Nartey said. To the assembled refugees, he said “these skills are going to improve your lives. You’re going to help others find stuff that that need about your countries on Wikipedia, and it’s a great resource to inform the world what is in your country and what you’re doing to affect the lives of others.”


The edit-a-thon was just one of many events taking place during Wikimania, which was held this year in the small alpine village of Esino Lario. A fire barrel with Wikipedia logos cut out of the metal was set alight, sending sparks flying into the air. Liquid nitrogen cocktails were poured. Loud bands climbed atop a roof to belt out tunes to waiting crowds below. Chocolate samples and pizzas were distributed, along with tiramisu from ambulance vans.

People cheered when one rainstorm passed through quickly, although others were not so lucky when they were caught outside during a second without their “emergency ponchos.” Sage Ross, however, chose to get the “full Wikimania experience” by standing outside in a t-shirt and shorts—in a storm that Payton Walton, another conference-goer, said featured the “loudest thunder I have ever heard in my life.”

The residents of Esino Lario and nearby areas were also a bright spot in the conference. When one conference-goer was locked out one night, the mayor found them a place to stay. A policeman asked for assistance in installing MediaWiki at his work. A 25 year old with a middle-school education bought a book for the first time in their life, saying “now that I’ve met all these people, and all they do is read and write, I need to catch up.” And an entire cohort of them showed up for Texas line dancing.

At the conference itself, Katherine Maher was named as the Wikimedia Foundation’s Executive Director, dropping an interim label. She later gave us the gift of the turtle of inclusivity, whose meaning is still not fully known. Jimmy Wales got choked up when mentioning his recently murdered friend Jo Cox. There were two Wikipedians of the Year for the first time: Rosie Stephenson-Goodknight and Emily Temple-Wood.
Rosie said of her honor that “It felt surreal, like my brain couldn’t compute that I heard my name and saw it on the big screen, alongside my picture. I’ve thought about it quite a bit since then. If someone had asked me whether it would be more likely for me to win the lottery or be named co-Wikipedian of the Year, I’d have said, ‘win the lottery, even though I don’t buy lottery tickets.’ And this would be the case as anyone can win the lottery, but to by named co-Wikipedian of the Year, one would have had to do something amazing within the wiki-universe, and be noticed for it by Jimmy, and as I’ve never considered my wiki work to be in the category of “amazing” and I never thought Jimmy would notice what I do, well, yes, it would be more likely for me to win the lottery. But, I’m so happy to be wrong as Wikipedian of the Year is such a huge honor. And to share it with my friend, Emily, ties us together in our work, so it doesn’t get better than this.”
Meanwhile, smaller sessions were being held quite literally all over the town. In one hackathon, the participants’ peak internet flow was 68 mb/s. Jan Ainali uploaded the first 360 video on Commons. Michael Jahn of Wikimedia Germany related a story from a wikidojo: “we were halfway through creating our article together, when the guy who was ‘piloting,’ ie actually typing/working, just mumbled ‘by the way, I’ve never edited Wikipedia before.’ The room fell silent for a second. Then all the Wikipedians in the room started cheering him and applauding.” In another wikidojo, Asaf Bartov, well-known in the Wikimedia movement, donned a gifted tie to the shock of all.

More people learned how Wikidata, the collaboratively edited knowledge base, works and operates, along with the potential it can have in the wider world. Community members and Wikimedia Foundation staffers led discussions and workshops dedicated to taking on harassment on Wikimedia projects (and the related Inspire Campaign) and were extremely well-received, according to anecdotal evidence. Editor meetups of every kind were held all over the village. Many flooded into sessions about Wikimedia collaborations with GLAM (galleries, archives, libraries, and museums) institutions and laughed at Alex Stinson’s toilet paper references. A Wikipedia Weekly podcast was recorded for the first time in months, which in between bus honks covered (as Wikimedian Andrew Lih put it) Italian culture and how locals were integrated into the conference.
If you have more memories to share, add them in the comments below!
Ed Erhart, Editorial Associate
Wikimedia Foundation