Dharmamitra Lee was playing pool a few days ago with a friend, but the friend’s head was not in the game. “Between every shot he was obsessively checking his phone,” he told us on the Wikipedia Facebook page. “He was playing the new Pokemon game … He told me a bit about it and I thought he was nuts!”
Lee’s story is not an unfamiliar one to many people in the United States and Oceania, where the augmented reality game Pokémon Go has captured imaginations. “When I started to read the headlines,” he says, “I thought I’d have a look on Wikipedia to see what all the fuss was about.”
Millions of others joined him.
On July 4, Independence Day in the US, 7,730 pageviews were recorded on the English Wikipedia’s Pokémon Go article. Exactly one week later, that number ballooned to 833,736. That’s an increase of over 10,000%. In total, as of July 13 nearly 4.5 million people have visited the article since the game’s launch (Editor’s note: that number is now nearly 6.7 million when extended to July 17). It topped Wikipedia’s list of most-popular articles for July 3–9, a range that included none of the three 800,000+ days. 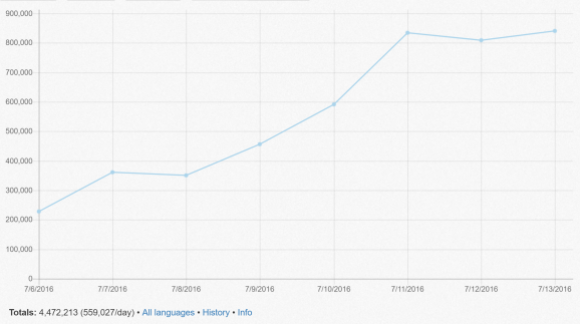 Pokémon Go’s popularity being driven in part by nostalgia built up over Pokémon’s twenty-year existence, a time where the franchise has had an impact on everything from gaming to television to even (surprisingly) Wikipedia, as we reported earlier this year. Neilsen L Roban certainly remembers those days: “I used to be a huge fan of Pokémon years ago,” he said, “but I grew up.” Not everyone did, though, as Ars Technica’s Andrew Cunningham’s testimonial shows.
Pokémon Go is a new step for the franchise. Instead of cards or video games, the app forces players to walk outside to catch their Pokémon, the eponymous fictional characters that players must catch and train.
The Pokémon Go article on Wikipedia has been edited 900 times by nearly 400 users, mostly in the last few days. Dissident93, an editor with over 38,000 edits since joining the encyclopedia in 2012, has the most edits to the article of any of these users. He has little interest in actually playing the game, but he believes that it is “essential for game articles [on Wikipedia] to have accurate and up-to-date information,” as they are often the first port of call for readers—many of whom are coming from the top-ranked spot on Google.
This isn’t always the easiest task, though. Dissident spends time in ensuring that Wikipedia’s video game articles remain consistent across the site, which have their own dedicated guideline. He told us that such article popularity, and the resultant “large amount of editors … is somewhat hard to deal with, as each have their own personal editing styles.”
That has to come together in a hurry with an article on a hot trend, but Wikipedia editors seem to be applying an old Pokémon adage to errors: “Gotta catch ’em all”!
Ed Erhart, Editorial Associate
Wikimedia Foundation