On a generally calm late summer day in 1628, a wooden warship—one of the largest to ever sail—left Stockholm on its first voyage. Named Vasa, the vessel was the culmination of an effort to solidify the fledgling Swedish Empire‘s control over the Baltic Sea.
Unfortunately for the Swedish, however, Vasa heeled over and sank in full view of a crowd of people who had gathered to witness the occasion. 30 people died in the disaster, caused by what the King of Sweden called “imprudence and negligence.”
Vasa spent 333 years at the bottom of the Baltic. It was refloated in 1959–61, after a complex and difficult operation conducted by maritime archaeologists.
Today, Vasa is a museum ship in Stockholm. According to its Wikipedia article, the ship “has become a widely recognized symbol of the Swedish ‘great power period’ and is … a de facto standard in the media and among Swedes for evaluating the historical importance of shipwrecks.” 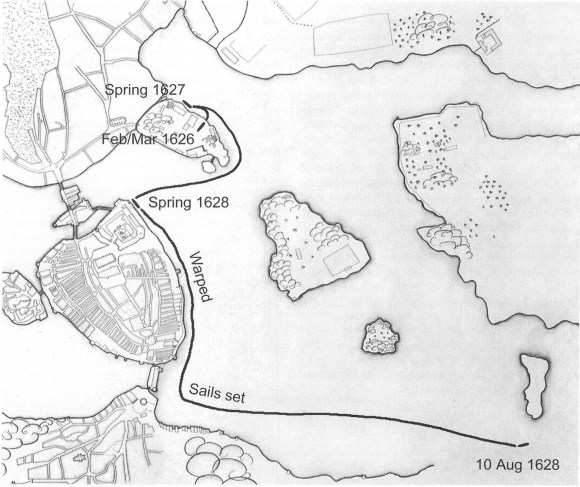 The man who wrote those words, Peter Isotalo, rewrote the ship’s English-language Wikipedia article with Henrik, another Wikipedia editor. Isotalo says that the ship is a time capsule, one that “offers an insight into a completely different, lost world. It has a physical presence that makes it easy to comprehend and size up even for non-nerds like myself.”
Thanks in large part to Isotalo and Henrick, Vasa is a “featured” article on Wikipedia, a quality marker which recognizes the encyclopedia’s “very best work” and is “distinguished by professional standards of writing, presentation, and sourcing.”


After Vasa, Isotalo continued onto another lost warship raised hundreds of years after being sunk—England’s Mary Rose. Isotalo estimates that he has spent hundreds of hours on the two articles. “When I get hooked on a particular topic and really go for it,” he says, “I tend to pursue pretty much every lead I can get a hold of.”
This sort of obstinacy has helped in ensuring that the articles are complete; he points to the “Causes of sinking/Modern theories” section in Mary Rose to make this point. “I spent quite a lot of time tracking down different perspectives and made sure to check up even on fairly obscure references,” he said, including “a rather minor (but important) critical note about potential eyewitness bias from Maurice de Brossard in a 1984 issue of Mariner’s Mirror.”
Extensive research, however, posed its own set of problems. “The history of [Vasa and Mary Rose] is often subsumed under layers of dramatic storytelling,” Isotalo told me. “There is a tendency to fit into a rather nationalist historical narrative—especially with Vasa, where the history of the ship itself has been presented through the perspective of being the personal property of an absolute monarch, which is clearly not true.” He continued:
Born in 1980 in the-then Soviet Union, Isotalo moved to Sweden as a child. His interest in maritime history was kindled during this time, as he was able to visit the Vasa Museum and later work in the Vasa Museum’s gift shop. The latter experience came in handy when writing Vasa‘s Wikipedia article, as he had easy access to the museum’s staff—including its Director of Research Fred Hocker, who Isotalo called “one of the leading experts on Vasa.” These individuals were able to give him assistance with the history of the ship, what was happening in Sweden and its navy around that time, the recovery of the ship from the bottom of the sea, and how it has been preserved since then.
Isotalo’s connections and Wikipedia work were also useful in obtaining a set of 57 images from the Mary Rose Trust, the charitable organization that runs the Mary Rose museum and is charged with preserving the ship’s remains.

Isotalo’s interest in maritime history on Wikipedia has continued even after writing about Vasa and Mary Rose, manifesting itself in several more featured and good-quality articles:

When he’s not editing Wikipedia, Isotalo is a trained records manager/archivist with a bachelor’s degree in history. He describes himself as a civil servant/bureaucrat of the Weberian variety, and works for the Swedish Committee for Afghanistan, a foreign aid non-governmental organization (NGO).
Ed Erhart, Editorial Associate
Wikimedia Foundation