One hour west of Chennai, India, a young biology teacher updates her course materials often. While she relied on books at school, her own students use the internet.  “In 2009, library articles were more helpful because I had no knowledge on how to use the internet [and] no internet at home,” she explains. “However, in 2016, updating is essential.”
Like an estimated 462 million Indians, the biology teacher turns to online sources for information. She uses search engines to find images, texts, and animations to help explain things to her students.
She has heard of Wikipedia but cannot cite the last time she used it. “I find everything I need on Google—I don’t ever have to search on Wikipedia.” 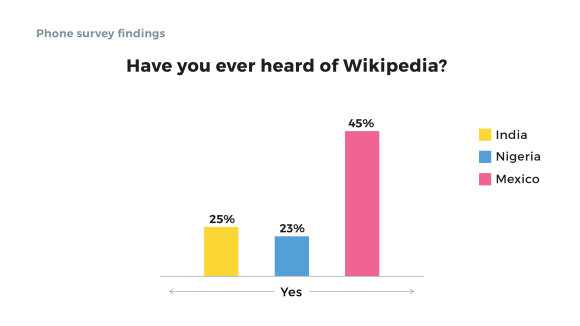 In a recent study of more than 11,000 people in Mexico, India, and Nigeria, the Wikimedia Foundation explored current information seeking and internet access patterns. The goal of this research was to better understand and serve potential “new readers” of Wikipedia– people who are not actively using Wikipedia or might not be aware that it exists.
The three countries examined represent more than 20% of the world’s population. They are also areas of rapid Internet access growth. Internet access is increasing 7% annually in Mexico, 13% in India, and 16% in Nigeria.  But despite this increased connectivity, Wikipedia usage remains low. While more than 239 million unique devices from the US visited English Wikipedia in September, just 3.1 million from Nigeria did the same.
Toby Negrin, Head of Reading at the Foundation said, “This kind of research is fundamental to our mission. Although Wikipedia is used by hundreds of millions of people, billions of other people still don’t use this resource. The New Readers project provides us with valuable insights about how the rest of the planet can benefit from the content created by our communities.”
The six-month research project combined 11,000 phone surveys with six weeks of ethnographic interviews across Nigeria, India, and Mexico. Phone surveys were offered in multiple languages:

Wikipedia brand recognition and awareness were less than 50% of surveyed participants in all three countries. In India and Nigeria, over 75% of participants said they had never heard of Wikipedia.
Among those who did recognize Wikipedia, there was widespread confusion: some participants explained Wikipedia as a search engine or as a social network. Some participants who were observed using Wikipedia did not know the name of the site or recognize the word Wikipedia.
“To expand the reach of free knowledge around the world, it’s crucial for us to learn from the users we are trying to serve in Africa, Middle East, Asia and Latin America,” said Adele Vrana, Director of Strategic Partnerships – Global Reach. “We need to have a deep understanding of our users’ needs and common challenges so that we can partner with people and organizations to better reach them.”

Over six weeks in Mexico City and Puebla, Lagos and Benin City, Delhi and Chennai, Wikimedia Foundation researchers had not only met potential Wikipedia readers, but also the very people who make Wikipedia possible. With more than 80,000 active volunteers who edit every month, Wikipedia remains a global community of free knowledge creators.
Wikipedians in Mexico City, for example, recently completed the world’s longest consecutive edit-a-thon, or collective content-creating event. It was 72 hours long and 60% of participants were women.
In Nigeria, a small but dedicated user group is adding photographs of Nigerian national parks to Wikipedia, and contributing new articles on the country’s prominent female leaders.
Just minutes away from the young biology teacher, Tamil Wikipedia is now approaching 90,000 articles thanks to the dedicated work of Tamil Wikipedians across Tamil Nadu. There is an estimated one Wikipedian per million Indians today, but they making a daily difference as they work across 23 Indic languages.
Now, the Wikimedia Foundation is exploring pilots with product,messaging and partnerships to better suit the needs of new readers. There is work to be done on succinctly explaining Wikipedia to those who might not be familiar, and raising awareness for the site’s value. Alongside community efforts like Kiwix, the Reading team is also beginning to look at online/offline features to aid Wikipedia reading in low or inconsistent internet access areas.
There are millions of potential Wikipedia readers in places like Mexico, India, and Nigeria—our challenge is to better serve them. We’re excited to start exploring new ways to do this.
Zachary McCune, Global Audiences
Wikimedia Foundation