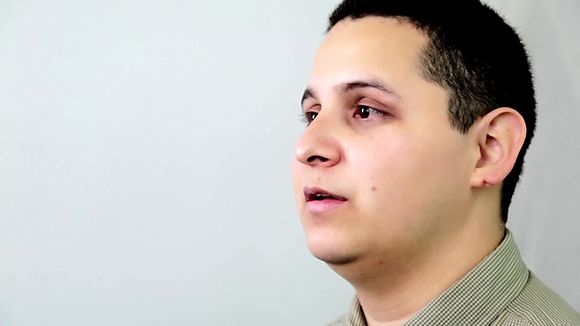 Allan Aguilar talks about privacy, democracy and cryptography. You can also watch it on YouTube and Vimeo, and a version with burned-in English language subtitles is available on Wikimedia Commons. Video by Victor Grigas, CC BY-SA 3.0.

“In a democracy we vote to elect a president, but we do it privately. No one knows who I voted for,” says Allan Aguilar, a Wikipedia editor, citizen journalist, and researcher from Costa Rica.
Aguilar conducts research on cryptography and politics; he believes that when internet users are exchanging messages over email, for example, the content should be protected by the same privacy an electoral vote has. This is the “democracy of the internet,” even when it is an informal social chat between friends.
Aguilar finds cryptography especially important in countries like his. He explains that due to a law enacted several years ago, citizen journalists in Costa Rica can end up in jail when they write something negative about a politician, even in a case where a politician has committed a crime.
Cryptography helps people maintain their privacy when using the internet. It enables private browsing and messaging that organizations and governments cannot access. Aguilar actively writes articles and research papers on this topic and publishes them under a free license so that everyone can have access to them.
A large part of these publications were published on Wikipedia and its sister projects, on which he has spent more than five years making over 80,000 edits. He told us that Wikipedia can help with cryptography by providing information about it and about anonymous communications software:
“In the article about TOR, for example, I can learn that it is free software, how it works, and I can get a link to download and use it on my computer. Wikipedia helps me understand that TOR is accessible to me.”


Wikipedia is frequently criticized in the academic field, often because it can be edited by anyone. But it is for that very same reason that Aguilar felt encouraged to join Wikipedia. “They don’t know how Wikipedia can change the world. It can change people’s views because anyone can edit Wikipedia, anyone can access Wikipedia, and anyone can share Wikipedia,” he shares.
Upon starting on Wikipedia five years ago, Aguilar chose to focus on translating articles from the English Wikipedia to the Spanish Wikipedia in order to boost the content quality in Spanish. When he gained some experience, he shifted some of his efforts to helping new users understand how Wikipedia works. Currently, he spends his time on Wikipedia making edits, reverting vandalism, and helping newbies. When Aguilar is not online, he can also be found with Wikimedia Spain and Wikimedians of Costa Rica user group. Both are Wikimedia affiliations that work to either support the movement on the Spanish Wikipedia and in Costa Rica.
To promote cryptography among Wikipedians, Aguilar organized a PGP key signing party last June at Wikimania, the annual conference of the Wikimedia movement, that was held this year in Esino Lario, Italy.
Profile by Reetta Kemppi, Communications Volunteer
Interview by Victor Grigas, Storyteller
Wikimedia Foundation