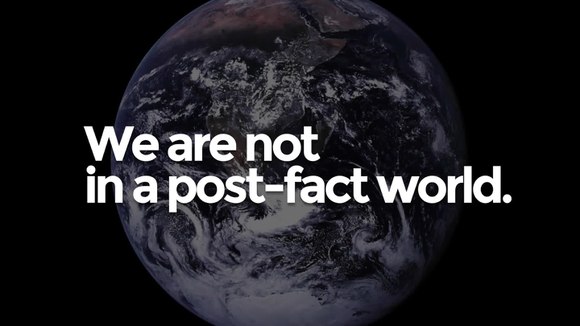 Video by Victor Grigas, CC BY-SA 3.0. You can view it on YouTube, Vimeo, or in various languages on Wikimedia Commons. You can also help translate this video’s captions.

Wikipedia and facts are inseparable.
It’s what we do: find the facts and revise them as new information becomes available, updating Wikipedia almost 350 times a minute.
Fact-based information is not always promised. In 2016, the line between truth and opinion seemed particularly blurry. Fake news spread across the internet. Statements were trusted without verification. And fact-checking happened too late for people to learn the real story.
Wikipedia will never be perfect, or finished. But years of practice and collaboration have built an effective filter for hoaxes and inaccurate information. Article content is paired with references to show that it comes from a reliable source.
Wikipedia editors haven’t rested since the first article was written almost 16 years ago. Since then, they’ve been constantly building and improving the treasured resource of information that we use almost every day—sharing breaking news in record time, providing source material so you can check for yourself.
The Wikipedia #FactsMatter video features clips from interviews and events recorded throughout 2016. Included is footage from edit-a-thons in New York City, Mexico City, and user-generated videos from the third annual Art+Feminism Wikipedia edit-a-thon, a series of interviews with Wikipedians involved with Wikipedia in Education, a hackathon in Jerusalem, a tech meetup in Ramallah, Wikimania 2016, and an interview with Jimmy Wales. Also included are a few screenshots from articles that were updated in 2016—the 2016 Summer Olympics, the largest known prime number, the 2016 World Series, Panama Papers, Juno (spacecraft), the king of Thailand Bhumibol Adulyadej, Brexit, Rodrigo Duterte, and Donald Trump.
We are not in a post-fact world. Facts matter, and we are committed to this now more than ever.
Video by Victor Grigas, Storyteller
Heather Walls, Interim Chief of Communications
Wikimedia Foundation