Last week, people flocked to US states from Oregon to South Carolina to experience the world going dark in the middle of the day.
Over the course of several hours, the moon passed between the sun and the earth. Those in the narrow band of “totality” saw the warm, glowing orb in the sky slowly disappear, ending in a time when it was safe to look up in the sky and see the sun’s corona. The world around these people dimmed, not unlike several minutes after sunset, even though something akin to a sunet could be seen in the distance.
This was the first total solar eclipse to pass over the entire contiguous United States since 1918, and a partially obscured sun was visible in the Americas, far eastern Asia, and the western reaches of Europe and Africa.
Excitement for the event was high. Businesses in Wyoming reported double-digit increases in sales, for instance, and others across the country were hoping for similar boosts. Hotels were booked to capacity in Oregon, Illinois, and elsewhere. 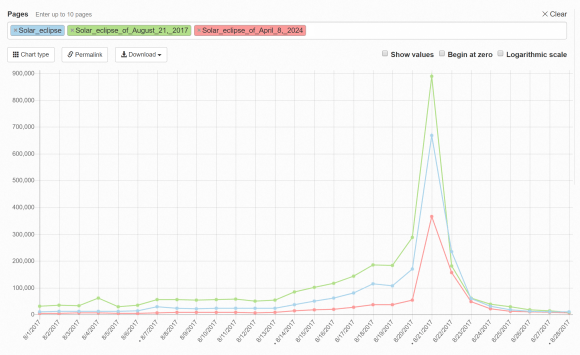 This interest was reflected on Wikipedia as well:

You can see these increases in the graph above. If you want to explore pageviews on Wikipedia for this or any other article, check out the pageviews analysis tool on Wikimedia Labs. 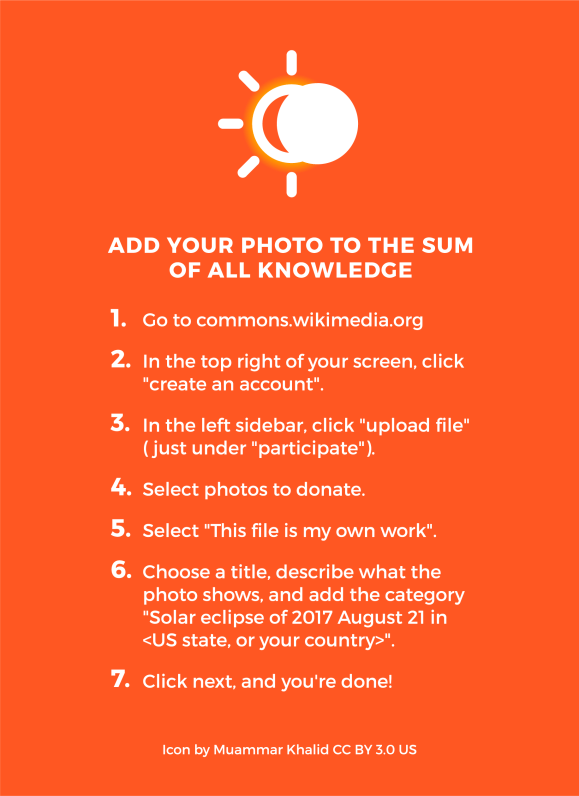 Our social and blog efforts focused on obtaining photos of the eclipse for Wikimedia Commons, a repository of freely licensed media that provides many of the photos you’ll find on Wikipedia. Was it possible to help photographers upload their images to Commons, where they’ll be preserved for future generations?
We kicked things off with a Wikimedia Blog post that asked Juliancolton, a Wikimedia community member known for his shots of the sky and horizon, to give tips and tricks about photographing the event. We then explained the complicated file upload process to Commons, step by step, alongside an infographic created specifically for the event that we intentionally designed for dissemination on social media.
We uploaded that infographic to Commons so Wikimedia community members could use it for their own outreach efforts. From there, to our pleasant surprise, Wikimedia community members in Mexico translated it into Spanish. (Thank you!)
Our own targeted outreach to social media users was limited to people who posted high-quality photos of the event. That severely constrained the potential impact of what this project could accomplish, but it was a safe approach. We did not want to flood Commons with poor-quality photos—which could in turn burden volunteer editors with maintenance tasks that we created. In addition, we took care to emphasize that this was a small experiment. You could say that we dipped our toes in the water first to make sure it was safe. (And at a reasonable temperature. Say, warmer than Lake Superior.)
Happily, we can report that it was a successful experiment. We tweeted about the eclipse 15 times from @Wikipedia on the day of the event, and over 2,300 people engaged with them. Three of those tweets were sent directly at Twitter users who posted original photos of the eclipse; all uploaded them to Commons with free licenses. Here they are:


The best individually performing tweet (in terms of engagement) came from something we’d consider our regular job—putting out fun facts with humor and personality. When NASA’s Twitter account for the Moon gloated about how it just blocked the Sun, both in real life and on Twitter, we told them to be careful and “not to make any of the management angry,” linking to Wikipedia’s list of lunar deities.
The most retweeted tweet referred to a 1918 solar eclipse, which was the last time the entire contiguous US could see part of an total solar eclipse. Thanks to the #eclipse hashtag and the inclusion of an image (with permission!) from a Foundation employee, the tweet was a model for our social media best practices. Tweets with photos generally outperform those without, and tweets using popular or timely hashtags will perform even better.
Last, we tweeted this video five days after the event to remind people to upload their photos.
Thanks to this successful experiment, we’re now looking for another event—perhaps one more globally centered—to solicit images of. If you have ideas, get in contact with us on social media, via email at digitalmedia [at] wikimedia [dot] org, or on one of our on-wiki talk pages. Here’s mine.
Happy editing!
Ed Erhart, Editorial Associate, Communications
Wikimedia Foundation

Thanks to Melody Kramer for designing much of the campaign, Aubrie Johnson for the social media statistics and stewardship of those accounts, and Blanca Flores for creating the infographic.

Wikimedia Commons accepts all kinds of educational media content, and it’s all freely licensed. That means that the content is available for anyone to use, anywhere, with no fee, as long as you follow the stipulations listed on the image’s page (e.g. crediting the author by name). Join them today!