We recently released a new interactive visualization of Wikipedia traffic by country and language. Called WiViVi, which stands for Wikipedia Views Visualized, the new visualization shows the geographic distribution of pageviews to any or all Wikipedias from two different perspectives:

Documentation for the visualization, which allows much more detail by region, country, or language, is available on Meta-Wiki. There are three main ways to explore the data to help get you started.

The dashboard allows us to analyze Wikipedia traffic in various ways. For instance, you can see how a country’s language distribution often doesn’t reflect the ratio of language speakers in the same country at all.

About 13% of the US population speak Spanish, but only 1.6% of pageviews from the US go to the Spanish Wikipedia. Conversely, we can see that 92% of pages read from India are in English. Indian English-speakers number more than twice the UK’s population, but are still a small fraction of the country’s 1.3 billion inhabitants. Similarly, 97% of pages read on Wikipedia in Nigeria are in English. Igbo, one of the country’s major languages, only accounts for 1%. 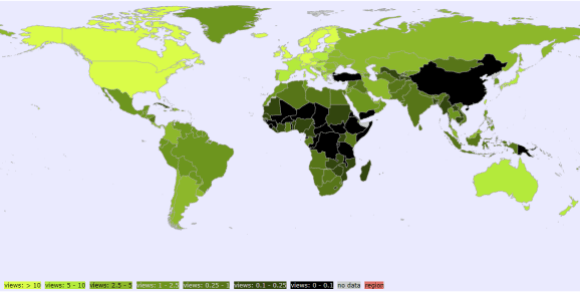 
Compared to other countries where the English language edition is read by a considerable fraction of readers, Japan is a striking exception, where very few people (3.4%) read the English Wikipedia. 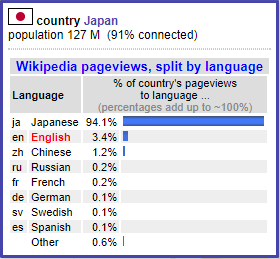 The French language presents one example of a colonial legacy that still affects a number of countries today. 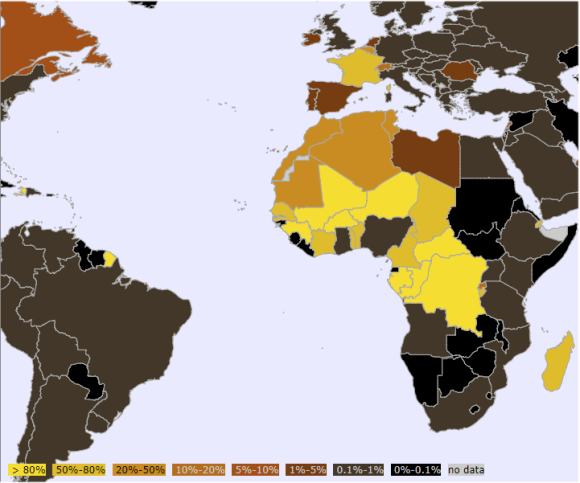 This visualization shows all countries where the percentage of pageviews to the French Wikipedia is above 50% (share of pageviews from France to French Wikipedia is 76.3%, for many countries in Africa it’s even above 80%).
We invite you to peruse these maps and share with us any interesting facts you may come across.
Erik Zachte, Data Analyst (Contractor), Wikimedia Foundation

All images are via the WiViVi visualization by Erik Zachte/Wikimedia Foundation, CC BY-SA 4.0. Thanks to Melody Kramer for her help in preparing this post.