Once a year, the broader community of Wikimedians and free knowledge leaders gather for Wikimania—the annual conference celebrating Wikipedia and its sister projects, the Wikimedia movement, and the community of volunteers who make them possible.
This year, the conference will be taking place in Cape Town, South Africa, where the organisers are giving this Wikimania a unique flavor—a theme that finds its roots in the African philosophy and way of life ubuntu.
It is our hope that this change will give us the opportunity to further our goal of creating the “sum of human knowledge”, by encouraging greater diversity and inclusion in who participates, and what we discuss, at Wikimania.
Ubuntu is summarised as the philosophy of “I am because you are,” or alternatively “the belief in a universal bond of sharing that connects all humanity.” Volunteer community-driven projects like Wikipedia capture this ethos well, as editors must collaborate to research, improve, and maintain them. And, of course, as that process resolves, others will be able to learn more and more from their work.
This philosophy can also be extended to broader knowledge sharing. The more one group of people’s knowledge is shared with the world, the more all peoples of the world understand each other. The more non-Western knowledge is recorded and incorporated into global knowledge repositories, the more that each new generation of readers from around the world are able to freely access that knowledge, in addition to the Western knowledge that’s already been compiled.
We know that Wikimedia’s vision of creating a world “in which every single human being can freely share in the sum of all knowledge” is far from being achieved. We are still far too limited in who contributes to our projects today, the topics that are being edited, and in the forms of knowledge being put forward. Examining these is critically important if we are to move in a shared Wikimedia strategic direction towards knowledge as a service and knowledge equity.
We believe that ubuntu is a philosophical framework that can help us go further to include the vast majority of the world that doesn’t find itself represented on Wikimedia projects right now, either as contributors, or in content.
It was in the spirit of furthering this goal, and discussing how best to achieve it, that the theme for Wikimania 2018 was chosen: “Bridging knowledge gaps: The ubuntu way forward”.

At Wikimania this year, the focus will be on:

Wikipedia’s gender gap has been well-publicized since at least 2011, when surveys indicated that well under 20% of Wikipedia’s editors identified as female—one survey even put it at less than 10%.
Other gaps in contributor diversity have been somewhat less-well publicized, especially Wikimedia’s global gaps. We know that as of 2015, only 20% of Wikipedia’s editors come from the Global South (broadly, Asia, Africa and Latin America). Skews in our contributor demographics may have been understandable when Wikipedia started—it did begin with a handful of broadly white men in the United States, after all—but current contributor demographics today don’t reflect the realities and needs of the internet in 2018. 75% of the online population today is from the Global South, and 45% of those online are women. We are missing out on contributions from the African continent, from indigenous people, from women and transgender people, and many others. Without them, we cannot build the sum of all human knowledge.
We also see gaps in content on Wikimedia projects. For example, there is a limited range of knowledge currently covered on Wikipedia. In general, issues covering Western popular culture, notable Westerners, science, and technology are extensively covered on most Wikimedia projects. But most language versions of Wikipedia still have far more biographies about men than women, and coverage of women scientists and women’s health topics can be spotty.
For non-Western topics, we are missing much locally relevant content about Africa, particularly that which is gathered from African perspectives or shared in African languages. The same could be said for indigenous knowledge and local knowledge from many places outside the Global North, much of which is still missing or written from Western perspectives. Challenges with software localization, how we structure data, or even the very forms of knowledge that Wikimedia has defined as “reliable” (text-based, rather than oral, for example) are issues we need to contend with in order to incorporate more diverse kinds of knowledge.
The map below from the Oxford Internet Institute, illustrating Wikipedia edits per 10,000 internet users, illustrates some of Wikipedia’s global gaps. 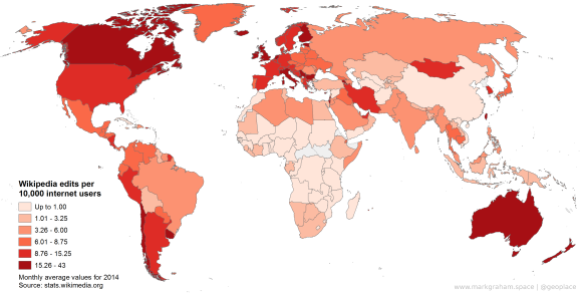 Our content gaps are perhaps, reflective of the interests of active Wikimedia contributors since the project was founded, as it is only natural that editors will cover issues that interest them the most, and cover them in a way that is consistent with their understanding of the world.
It is fantastic that topics of such great interest to existing contributing communities are covered so well. Indeed, we feel they should continue to be expanded and improved—existing contributors and bodies of knowledge will always have a place in Wikimedia.  However, we still have room to grow, and gaps to fill, and the need is greater from some sections of world society than from others today.  As a global community, we can do more to bridge our gaps and share a broader range of knowledge with the world. Let’s work together on it.

In keeping with this theme, the Wikimania Programme Committee is now calling for individuals to submit proposals for workshops, discussions, presentations, or research posters to give during the conference. All submissions must address the theme of bridging knowledge gaps, for which we have identified some potential topic areas:

We are inviting everyone, including you, to think about these topic areas broadly and innovatively to encourage imaginative proposals. What does the ubuntu way forward look like to you? What knowledge gaps should we work on filling together next?
Our submissions page is open, and we are looking forward to hearing from you.
Douglas Scott, Organising General Chair, Wikimania 2018