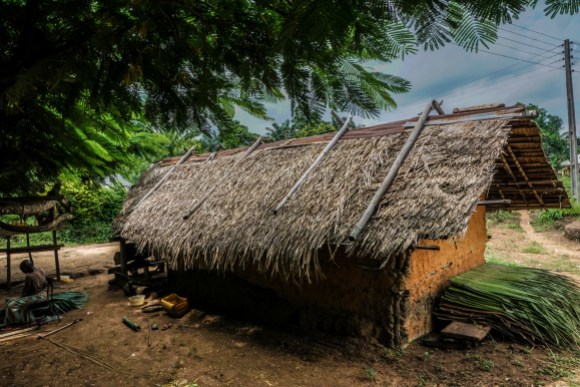 The creativity that comes with mud housing in rural areas is majorly in the art of it’s roofing, of crafting thatch. With the continuous movement of development reaching far into these area, newer ways of doing things have been discovered, faster, reliable, more durable ways. Houses are now being raised with modern materials, and even the ones standing still in traditional clay and thatch are being refurbished with the fashionable cement blocks/metal roofing sheets. This progression has no doubt brought about a decline to the practice of traditional crafts such as thatching. 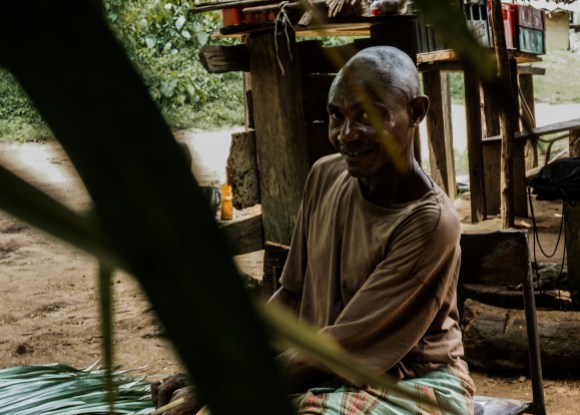 Mr. Bassey Ekpenyong, an indegene of Ito community in Cross-River state, Nigeria, calls me his friend in that manner that, as a stranger serving in his community under the National Youth Service Corp, makes me feel safe. He invites me to his shop at evening hours, and as he offers me roasted nuts, he makes a new promise to take me on his bike to the beach when the rains have stopped and the roads are accessible again. 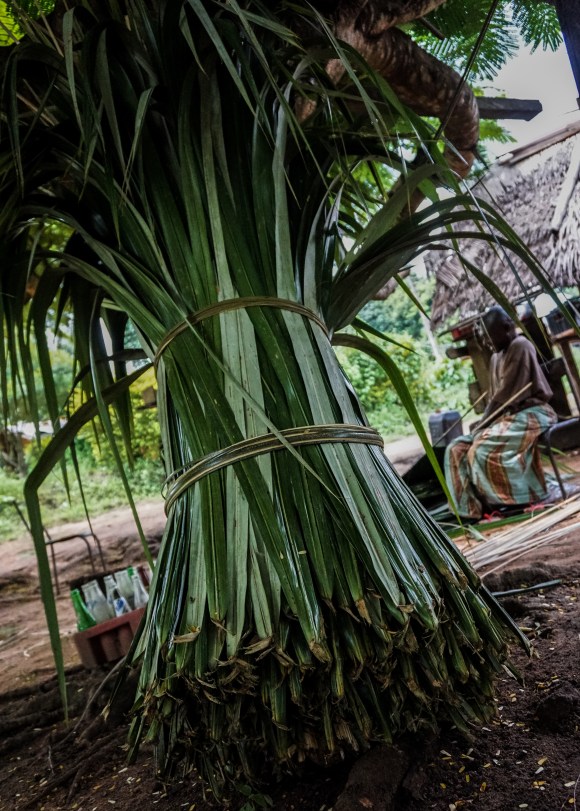 It is on my return to Ito after a couple of weeks away that I first see him sitted in the shade outside of his shop, palm leaves littered all over. He sees the excitement register on my face a top the moving bike and signals that I return, as if to say “I have been waiting for you”. And truly, he has. 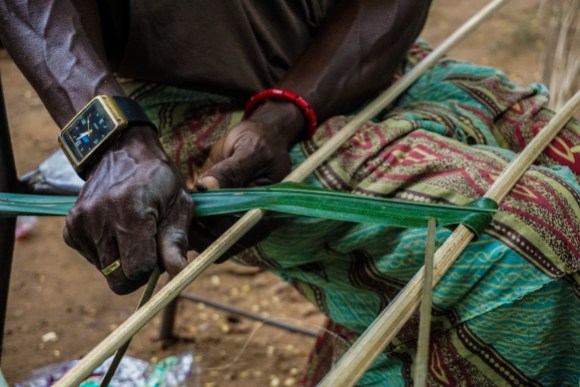 He is making a new roof for his shop, he tells me. He wants me to make pictures. There are palm leaves all over, some tied up in a bunch, some lying underneath the sun, others thatched already and staked up in a pile. On his hands are two long,thinly carved sticks that would function as the skeletal frame for a pair of thatch. 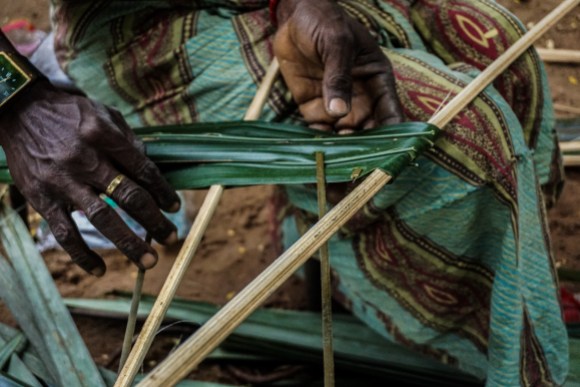 He begins a new pair and laughs as he talk; a satisfaction that comes with the knowledge that he is creating for me yet another experience to take home when service is over. He makes a joke of it. 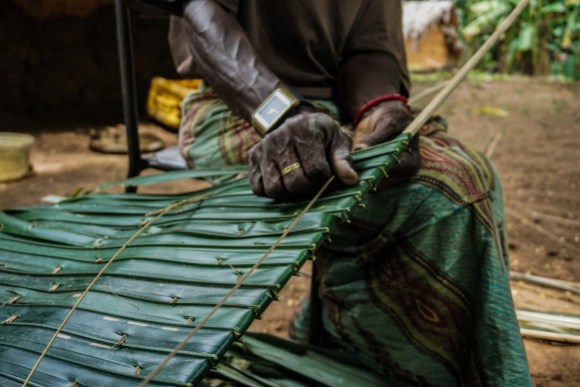 He folds a leaf in half neatly across both sticks. He does same for another leaf, lapping it with the previous, and then, with another thiny stick which he breaks afterwards, pins the the leaves in place, firm. 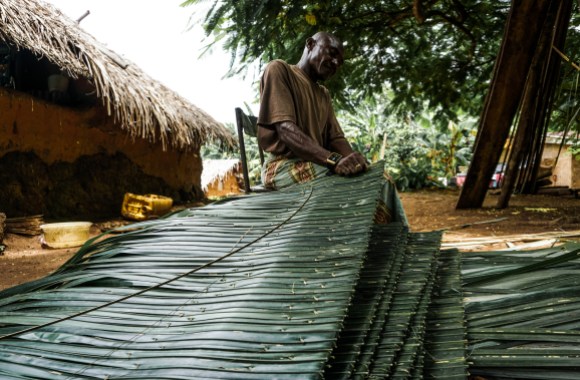 The process continues until the length of the sticks are fully covered in green palm leaves. He completes a pair of thatch in what takes minutes and begins another. 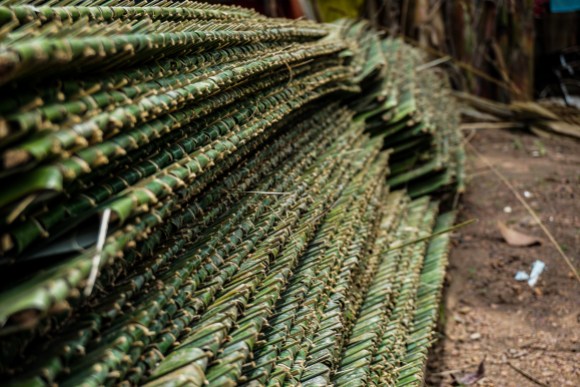 Mr. Bassey is a converser. He talks about the need for this change, a practice he does every five years as this is the durability period for the thatch. “Nfok nkaya” He says in Efik pointing to his shop behind, mud house with mat(thatch). He points to other houses around, including the ones made of clay but with metal roofing sheets and calls them “Ikanga” zinc dey up. 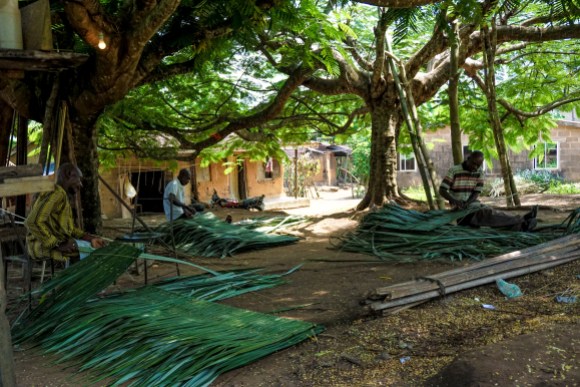 On other days, Mr Bassey is joined by his friends. They sit for long hours underneath the tree on their return from their various farms. They chat as they thatch, switching on occasion from Efik to English. 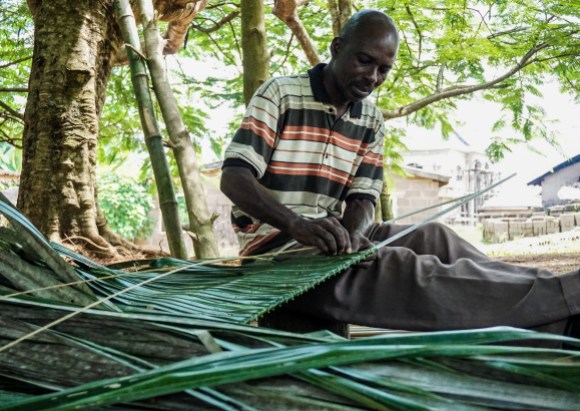 They craft at the same pace, with the same measure of skill, but what intrigues me the most is their fellowship in that shared space, a communion of banter and silence. How this silence descends on them as they craft only for it to be broken yet again with a thought, a story, a sigh – childhood friends who had all grown up in this same space and carried within themselves different experiences as they each sorted life out; some leaving only to return yet again. 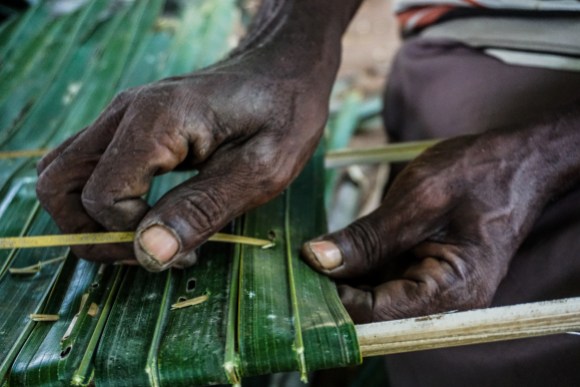 Childhood friends thatching through time, memories into their palms, pinning them into that place of recollection, of regret, of conquests. Pinning them with the same laughter and voices that survived time. 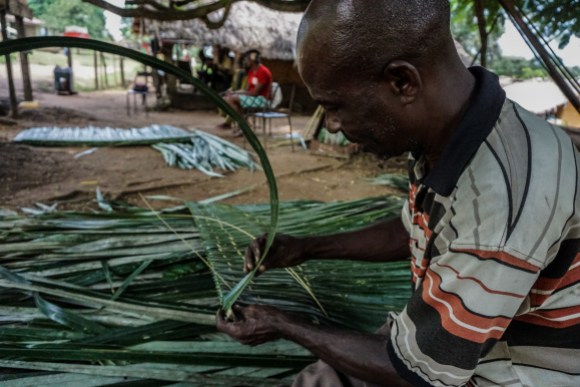 When asked how and when they had learnt thatching, the story is the same for everyone. They throw back to a time when they were just kids, when Ito was only made of the traditional mud houses. 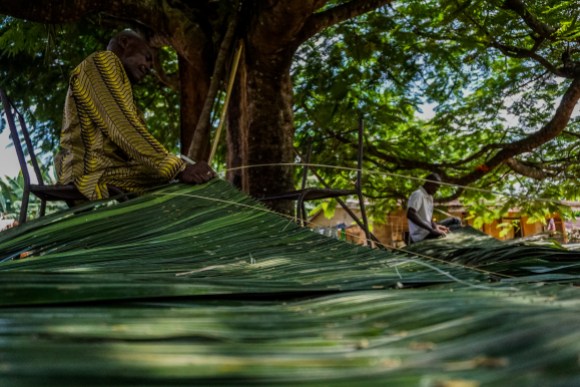 As kids, they had been taken along with other kids by The Contractor, an older member of the community who dealt in a sales of thatch, to the beach. There, they had, each person assigned to a bunch of palm leaves, made dozens of thatch. This contractor, in return had provide their meal for the day and bought them treats. He had, later, on completion of their work, also paid for their services to their mothers; money meant for their upkeep. 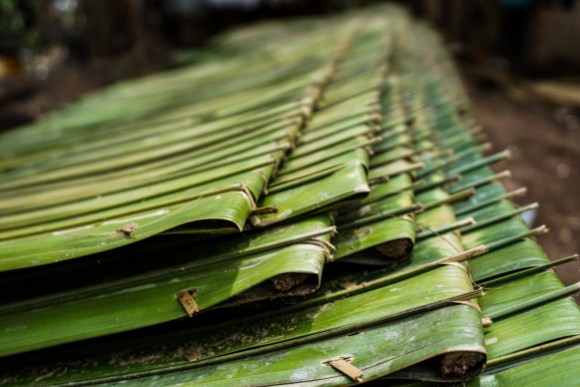 “We just sabi” Mr. Bassey tells me, explaining to me how he couldn’t really pinpoint exactly how he had learnt. How, before then, in a society where almost everything used where hand-crafted, most of these skills children grew into, got used to just by seeing it being done on a daily basis, just by being a part of the home/society. 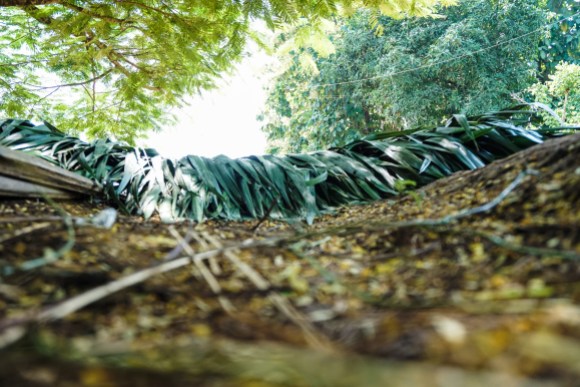 “Those wen no sabi wen we go beach go just sidon look those wen sabi, or, watch contractor do am and dem go sabi. 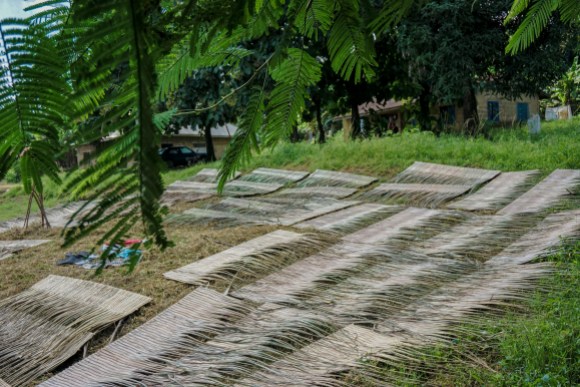 To Mr. Bassey this is more. It carries sentiments enough for him to brag about the metal roofing sheets he’s kept lying waste in his house for years, enough sentiments for him to, in a time when the few thatched houses left are been broken down and then raised up in modern fashion, sit outside of his shop underneath the tree every five years, matting green leaves into thatch. 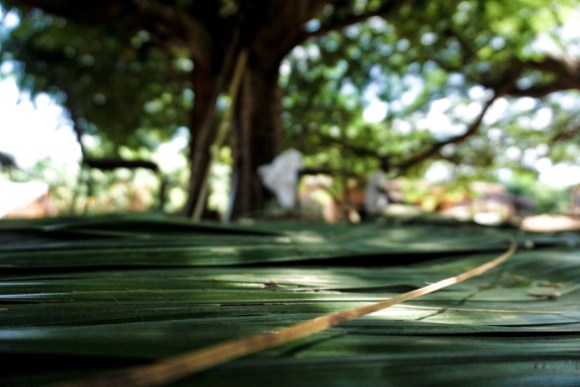 His shop, once his home, carries for him memories of events: of childhood adventures; of leaving and returning; of his late wife, of loss. Memories that make him. And thatching, this craft, this practice of maintenance is, in a fast paced world, for him the very means through which he holds time in his hands. The very means to which he laps these memories into a place of remembrance. The very means in which he shelters them.

For the other awarded photo essay, see “Zanzibar seaweeds in Tanzania.” For more information about the contest, see the main announcement.