In the recently conducted Wikipedia readers study, we asked respondents to rate the quality of Wikipedia articles on several aspects: trustworthiness, comprehensiveness, neutrality, variety, and ease of understanding. Although we already employ the Article Feedback Toolto assess the quality at an article level, we wanted to understand readers’ perception of quality on Wikipedia as a whole.

On average, readers rated Wikipedia  7.54 on a 10-point scale on trustworthiness. India (8.09), Mexico (8.13) and Egypt (7.94) reported the highest scores on this front. German (7.89) and American (8.02) readers also rated the site significantly higher than average on this measure. We observed less favorable ratings from other European countries.

In the US, Russia, Mexico, India and Egypt, almost half of the respondents found Trustworthiness to be Very Good/Excellent (9+/10).

In Brazil, Mexico and US, more than half the respondents find Comprehensiveness to be Very Good/Excellent (9+/10).

In the survey, we defined neutrality as “information providing a balanced point of view”. Readers rated Wikipedia 7.64 on a 10-point scale on this metric. Readers in the US (8.16), Germany (7.96), India (7.91) and Mexico (8.32) had the most favorable ratings with respect to neutrality. Again, other European countries were less favorable with their ratings.
In Mexico, Brazil, and US, more than half of our readers reported Neutrality as Very Good/Excellent (9+/10).

On average, readers rated Wikipedia 8.23 on a 10-point scale in terms of Variety. Readers in the US (8.81), Canada (8.69), Brazil (8.65) and Russia (8.64) reported significantly higher scores on this metric. It’s interesting to note that this metric exhibited the largest deviation in ratings across readers. This deviation was especially pronounced in Egypt and Spain. Readers in Egypt (6.16), Spain (7.84) and Japan (7.55) scored significantly lower on this measure.

That said, readers are rather satisfied with the variety of articles on Wikipedia as a whole, with more than half the readers (52% across all 16 surveyed countries) rating Variety as Very Good/Excellent (9+/10).

With an average rating of 8.34 out of 10, readers are perhaps most pleased with this aspect of a Wikipedia article. Also, this metric exhibits the least deviation, which means that readers across countries fairly consistently find articles easy to understand. Readers from US (8.83) and Russia (8.77) report the best ratings.
In fact, 60% or more readers from as many as six countries – Brazil, Canada, Mexico, Poland, Russia and US – rated Ease of Understanding as Very Good/Excellent (9+/10).

To get a better idea of the overall perception of quality of Wikipedia articles, we calculated a composite index, by combining scores for each of the five metrics mentioned above. The resulting Quality Perception Index presents some interesting observations. 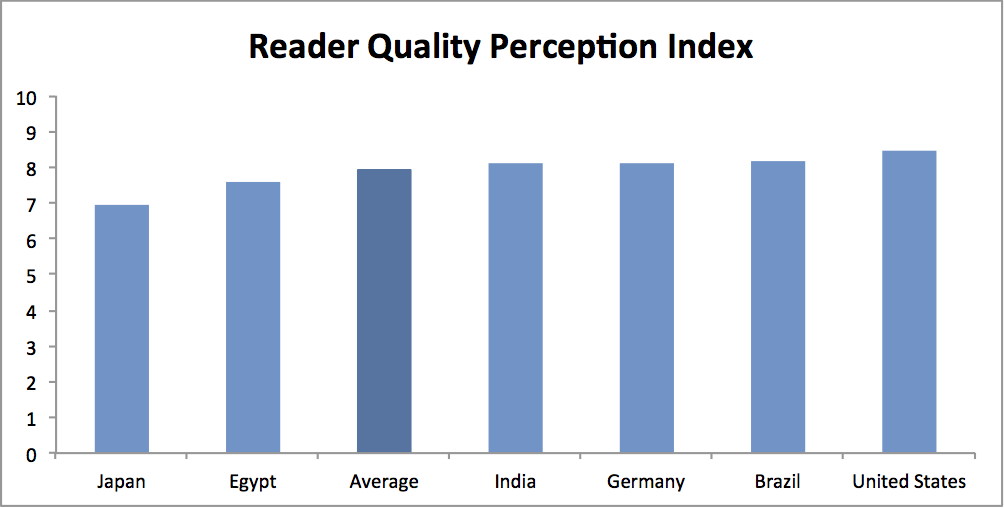 The average Quality Perception Index (QPI) across respondents in all 16 countries is 7.92 on 10. There is an interesting contrast between readers of English and non-English Wikipedias. Readers in the US, Canada, UK, South Africa, Australia and India, where 94% or more respondents primarily read the English Wikipedia, report a higher QPI than average (8.02). Also, they report a much higher QPI than readers from other nations where 89% or more respondents read non-English Wikipedias (7.85). If we remove some countries that report good scores on the QPI (Brazil, Mexico, Russia) from this group, this gap only widens.
On average, about 43% of the respondents rated Wikipedia articles as Very Good/Excellent (9+/10) on all measures. Readers in Brazil, India, Mexico and Russia were the most favorable, with half or more respondents assigning a Very Good/Excellent rating. Japan was a definite exception, with only 16% of the readers reporting similar ratings.
In a future blog post, we will discuss how our readers compared Wikipedia to other top websites, such as Twitter and the New York Times. This will provide additional context to the findings discussed above.


Mani Pande, Head of Global Development Research
Ayush Khanna, Data Analyst, Global Development
We recently conducted an online survey of Wikipedia readers, limited to 250 participants each in 16 countries. This is the fourth in a series of blog posts summarizing our findings. If you are interested, you can find out more about the methodology of the survey here.