When a hackathon is organised, it is wonderful when the reality of the results exceeds expectations. The reality was that some of India’s best and brightest attended the hackathon. They represented many of the languages  of India, and it showed.
Seven Indians and a German created an input method for their language. A Russian keyboard method is promised for the next day. There was a jQuery wizard who created a wonderful and necessary addition to the Narayam extension: a visual cue to where the characters are on the keyboard. This information comes directly from the Narayam definitions and the best part is that the visual cue actually works as well.
The WebFonts extension got its reality check. WebFonts provides default fonts in order to ensure that nobody sees the infamous Unicode squares and numbers instead of the desired characters. The MediaWiki software is exclusively open source, and consequently the fonts we deliver through the WebFonts extension need to be freely licensed, too.  The default font we use for the Indic languages is the Lohit font produced by Red Hat. It was quite astonishing to learn that some of the characters are not what the character should look like. Bugs have been filed for this at Red Hat and more work will be done. 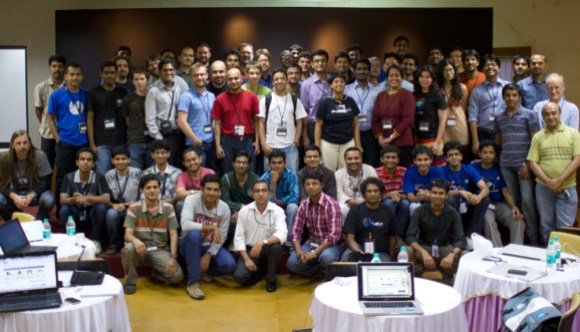 We are going to roll out the WebFonts extension on December 12th. Our aim is to install it on the Indic projects. When we have freely licensed fonts that show languages correctly, we will finally be able to provide readable content to everyone. We will be working towards resolving the issues identified at the hackathon.
The Mumbai hackathon has also been good for the Kiwix off-line reader; not only was the software localised into several languages, new developers also familiarized themselves with the software itself to implement further improvements. This is quite important because many Indian people have no or intermittent access to the Internet. In addition to Wikipedia content, there are many projects in India to transcribe books that are in the public domain; as the Kiwix software gets ready to support this content, it will help more and more people get access to India’s rich cultural heritage.
Mobile support was the third centre of gravity; many first-time Wikimedia hackers teamed up with seasoned Wikimedia developers and this produced great results. This included work on a mobile landing page for India, as well as a gateway that allows users to receive Wikipedia articles over SMS and the carrier-specific USSD technology. To appreciate this, many people do not have access to the Internet and consequently to our content. Work also continued on the “Wikipedia Zero” project, which aims to bring Wikipedia and other Wikimedia content to millions of users without data charges.
We also saw an interesting connection with the October 2011 Coding Challenge. Developer Yuvipanda implemented Android 2.2 support for one of the coding challenge submissions, the “Share with Wikimedia Commons” Android app (as well as for the official Wikipedia Android app).
All this will get some review, maybe some polishing but we are quite eager to bring this functionality to you.
Many of the hackers were new to MediaWiki. With an introduction by Erik and private tutoring by Sumana, Tomasz, Patrick, and others, several people really got into the swing of things to the extent that some bugs were smashed.  The hackathon proved as always that when you bring great people together special things can and do happen.
Thanks,
Gerard Meijssen
Internationalization / Localization outreach consultant