Cash of $14.9 million, which is six months of cash reserves at current spending levels.

WikiConference and Hackathon in Mumbai, India 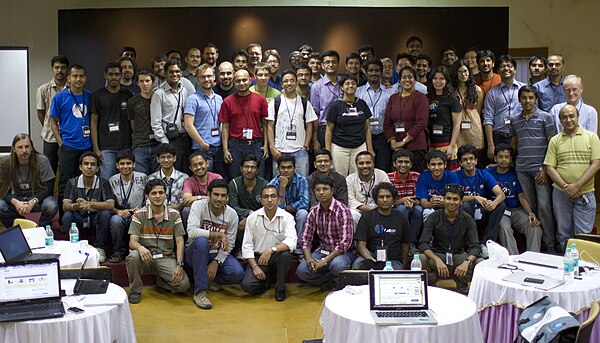 Participants of the Mumbai Hackathon

From November 19 to November 20, Wikimedia staff and volunteers gathered together in Mumbai for the India Hackathon 2011, focusing on mobile access, localization, and offline distribution. The hackathon was held simultaneously with WikiConference India 2011, an event organized by Wikimedia India. The WikiConference had nearly 700 participants, making it one of the largest Wikimedia events ever, and certainly the largest so far in India. More than 50 sessions provided insights on community building, improving project quality, establishing partnerships, best practices in outreach and opportunities for general experience sharing.

Since August, the experimental “Moodbar” function has invited new users on the English Wikipedia to quickly and easily provide feedback on their editing experience by entering a 140 character comment. All these comments are posted as a public feed on the Feedback Dashboard. In November, we added a new functionality that enables experienced editors to easily respond to this feedback without leaving the dashboard. Wikimedia Foundation Community Organizers Steven Walling and Maryana Pinchuk have started a Response Team of experienced editors willing to help out new users in this way.

We’re continuing to improve this system and assess its impact; specifically, whether new users read the messages they receive, and whether editing activity increases as a result of active coaching.

The annual Wikimedia fundraiser launched on November 16th with over $1M donated on the first day. $10,433,402.89 were donated until the end of the month, in a total of 545,362 donations. The significant increase in contributors across more regions of the world can largely be attributed to the increase in the number of currencies Wikimedia is able to accept this year – more than 80.

Compared with the previous year, four times as many volunteers are contributing to the translation of banners and appeals, including over 700 logged out users (readers?). The Article Feedback Tool enables anyone to rate the quality of the translations.

Discussion of the image filter in Hanover 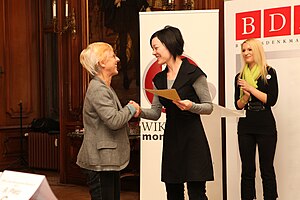 Award of Wiki Loves Monuments and Heritage Day. November 17th, 2011 in the offices of the Federal Monuments Office Vienna, Hofburg

In November, the Wikimedia Foundation sent a delegation to Europe, in which Executive Director Sue Gardner, her assistant James Owen, General Counsel Geoff Brigham and Community Organizer Maryana Pinchuk visited seven cities in three weeks. The main purpose of the trip was to spend time with chapters, with the goal of listening to chapters’ hopes and fears, particularly with regards to fundraising and funds dissemination. A secondary purpose was to spend time with the German community, with the goal of improving mutual understanding particularly with regard to ongoing controversy about the possible implementation of a personal image filter.

The trip also involved a number of other activities, such as meet-ups, talks and media interviews. The delegation visited Paris, Utrecht, London, Vienna, Hanover and Berlin. The trip included meetings and/or meals with five chapter boards, as well as four community meet-ups, and a variety of other small informal gatherings with chapters people and/or editors. The group visited the UK National Archives with members of the UK Board, and helped present awards to the winners of the Wiki Loves Monuments competition in Vienna. Sue Gardner gave three presentations, to the UK Board, the German chapter, and to Imperial College in London, and did six media interviews, in London and Berlin.

A detailed report of the Tech Department’s activities for November 2011 can be found at:

Major news in November include:

Finalizing the Portuguese Wikipedia research project, we have come out with a few conclusions and recommendations, which can be seen in more detail here: http://meta.wikimedia.org/wiki/Research:Portuguese_Wikipedia_trends_and_behavior/Suggestions

We opened the position for the national program director: http://wikimediafoundation.org/wiki/RFP/Brazil_National_Program_Director

We are working in conjunction with recruiter Michael Page in order to fill this position, with an anticipated start date mid-January 2012.

Scholarship committee is beginning to kick off work again. Goal is to broadcast the scholarships more broadly and try to get increased applications from developing countries.

November saw much of Communications work focussed on preparations for the launch of the 8th annual fundraiser, including press release work, media strategy, and fielding a wide array of media requests (see storylines below). Work proceeded (and is now almost complete!) on the 2010-11 WMF Annual Report. Considerable communications support to the important positioning around the proposed internet blacklist bill being discussed in Washington, for Sue’s visit to Europe, and also considerable work on hiring for the manager, global communications post now that Moka Pantages has moved on from WMF.

Wikimedia announced its opposition to an internet blacklist bill being reviewed in Washington DC in November. WMF joined dozens of other popular web properties and free-culture organizations in protesting the destructive bill, and the topic received wide (and continuing coverage) through November – mostly opposing and criticizing the bill.

Wikimedia’s annual campaign launch drew considerable media interest, particularly this year in the social media space. Though the campaign kicked off with several days of record-breaking successes, there was less coverage of the kickoff than in previous years. A related announcement of a $500K grant from the Brin Wojcicki Foundation garnered far more positive and highly visible coverage. Significant social media coverage focussed on the quirks of the Jimmy Wales (and/or Brandon Harris) image placement atop article names.

The first-ever major wiki conference in India kicked off in November, and resulted in considerable media coverage – much of it focussing on the presence of youth protesters challenging the presence of what they believe to be illegal maps and renditions of India. Most coverage was fairly balanced of the protests, and focussed on Jimmy Wales opening keynote insisting that Wikipedia is a place for sharing viewpoints and staying neutral.

Sue’s travels in Europe (see also “Highlights” section) resulted in some great coverage in the UK and Germany:

On BBC Radio 4’s World at One

HR has accelerated recruiting as promised by adding another recruiter to the mix. Karen Chelini is a very experienced recruiter, working with the team primarily on the tech team’s hires. She is a contractor and will be with us through January.

We have several ongoing searches right now, including the CTCO role, that are turning up some great candidates, so we hope to have more hires rolling in soon. We continue to fill open slots, and this month there were several key hires that we put a lot of work into. Welcome all!

We also reviewed and approved a new benefits broker for the Foundation who has helped us find most cost efficient, and better, pricing for our employee benefits. This is especially important as we grow not only to remain competitive in the market, but to also ensure that we are in compliance with labor laws that may have different requirements depending on the size of our organization.